Cystic nephromas are often asymptomatic. They are typically discovered on medical imaging incidentally (i.e. an incidentaloma).

Cystic nephromas are diagnosed by biopsy or excision. It is important to correctly diagnose them as, radiologically, they may mimic the appearance of a renal cell carcinoma that is cystic.[2] 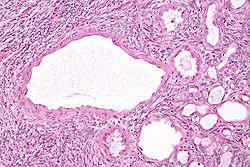 The characteristics of cystic nephromas are:

Cystic nephromas have an immunostaining pattern like ovarian stroma; they are positive for: