The college began in 1995 with the birth of the Bachelor of Science in Computer Science (BSCS) program under the College of Commerce. The first batch of students was composed of two sections with about 100 students. Prof. Mary O’ T. Penetrante was appointed to be the faculty-in-charge of the new program. She was assisted by Mr. Jojee Roy Juarez who handled the programming subjects of the fledgling program.

After two years and more students, the university deemed that the BSCS program was stable enough to merit the right to have its independent administrator. In 1997, the BSCS program became a bona fide department of the College of Commerce with Prof. Penetrante, its first department head. Prof. Aquiles Sansing, Mr. Aldwin Alojipan and Mr. Nick Gazo were among the first faculty members. The department had an enrollment of 300 students.

The following year, the number of students enrolled had reached almost 500. The administration deemed it necessary to construct additional laboratories and hire more teachers. 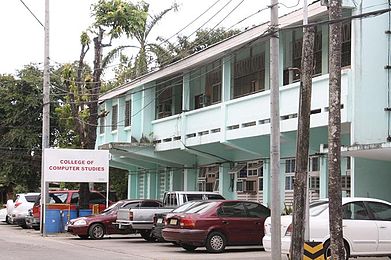 Mary Thomas Building, home of the College of Computer Studies

By the first semester of school year 1999–2000, the CS Department Office was relocated from the Dean’s Office of the College of Commerce (where it had been housed from the start) to the Mary J. Thomas Building (MT) where it is to this day.

The three existing laboratory rooms were transferred from the New Valentine (NV) Building to the second floor of the Mary J. Thomas Building. An additional computer laboratory with internet capability was supplemented to further serve the needs of the growing number of students.

By the end of that school year, changes on the management of the department was planned based on the memorandum for the Commission on Higher Education (CHED) that all computer-related courses should be under one college or academic unit for efficient administration.

During the first semester of SY 2001–2002, the CS Department was transferred to the College of Engineering to be managed with the newly offered Bachelor of Science in Software Engineering (BSSE) course. It was called the Software Engineering and Computer Science (SE & CS) Department and was headed by Engr. Cirilo Calibjo, PEE. The students faced major adjustments because they had to adapt to the rigorous discipline of engineering mathematics and other Electrical Engineering subjects taught by engineering faculty. This decreased the population of the department.

Despite the difficulties, there were positive improvements in the form of faculty development programs through seminars and trainings local and abroad. A change of management brought about change in the number faculty of the department because some instructors had chosen to remain under the College of Commerce.

In the College of Commerce, new developments continued. Since information management and computerization became and integral component of the business sector, the college introduced the Bachelor in Information Science and Management (BISM) which was the brainchild of Prof. Aquiles Sansing. 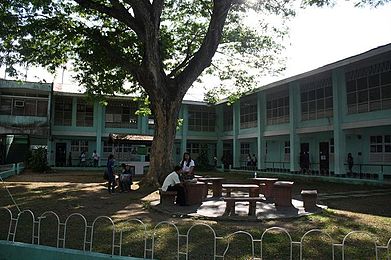 The new college reunited former colleagues and resulted in a happy mix of experienced teachers and eager new instructors. More changes were made to optimize the course offerings of the College of Computer Studies in 2004. The college proposed revisions; all were approved by the university. In March 2004, some subjects for BSCS and BSIT were changed, and BISM was renamed as Bachelor of Science in Information Management (BSIM). 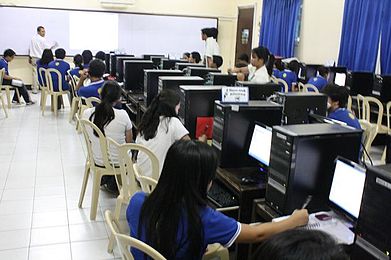 During the First Semester of SY 2006-2007, Engr. Calibjo went to Manila to pursue doctoral studies in Electrical Engineering at the University of the Philippines, Diliman. Prof. Rodney A. Gicana was appointed as the Officer-in-Charge during his absence. Prof. Gicana was previously the Department Head of the Software Engineering Department.

During this school year the Ladderized Education Program (LEP) under the Technical Education and Skills Development Authority (TESDA) was implemented through the BSIT course. Under the program three competencies were Personal Computer Operations (PCO) NC II (Ladder 1), Computer Hardware Servicing (CHS) NC II (Ladder 2) and Computer Programming (CP) NC IV (Ladder 3). Scholarships were provided by the government through TESDA to aid the students. At this time the enrollment boasted more than 6,000 students.

During the second semester of 2006, the college became a CISCO Networking Local Academy[3] under the supervision of the University of Cebu (UC) as its regional academy. Also in this semester the name of the Bachelor of Science in Information Management (BSIM) was changed to Bachelor of Science in Information Systems (BSIS) pursuant to CHED Memorandum Order (CMO) No. 53, Series of 2006.

The college opened its doors to professional training in computer networking technology using the CISCO Discovery curriculum.[4] The classes were held on Saturdays for 10 hours per module. During its first opening, more than 20 professionals enrolled.

To meet the increase in population, a laboratory was added to house the CISCO Laboratory at MTR3.

On the first semester of SY 2009–2010 the college enrollment increased to more than 800 students, with BSIT having the most enrollees. New programs are envisioned to meet the demands of the industry and make the college true to its mission and vision of becoming the premiere institution in information technology education in the region.

The College of Computer Studies have linkages with IT, business companies in the Philippines.[5]