Jaro is one of the six districts of Iloilo City, in the Philippine province of Iloilo, on the island of Panay, in the Western Visayas.

It is the seat of the Catholic Archdiocese of Jaro, that covers the whole Western Visayan region. [1] 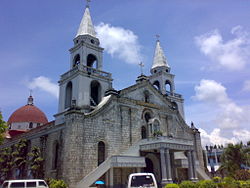 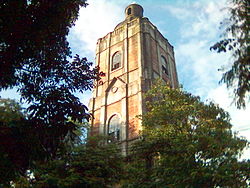 Its original name was Salog or Saro. It was also referred to as "Ilaya" or "mountain/dry land" together with La Paz which was referred to as "Ilawod" or "sea/wet land".[2] It had been one of the richer areas of Iloilo City even during the Spanish colonial period (1521-1898) and probably the richest town of the entire colony. Historical artifacts indicate that it had once conducted trade with China and Siam (Thailand) due to its port along the navigable river that ran through the town. It was also the center of religious and economic power in the Visayas during the Spanish rule.

Jaro officially became a city in 1886. La Paz was a part of Jaro until it became independent from Jaro and became a Town and incorporated into the City of Iloilo. It was later absorbed by the City of Iloilo along with the neighboring towns of Molo, Mandurriao, La Paz and Arevalo in the early 20th century when all economic activities were shifted to the port of Iloilo.

Located between Dungon Creek and the Jaro River, Jaro fulfills the ideal design for establishing communities during that era: a site between two rivers, with a church and plaza in the center, and homes of affluent families in the vicinity. The church is the famous Parish of Our Lady of Candles, also known as the Jaro Metropolitan Cathedral, the headquarters of the Archdiocese of Jaro and the site of a miraculous statue of the Virgin Mary, which was canonically crowned by the late Pope John Paul II during his visit in 1982. The image is the only religious icon in the country to have been personally crowned by a Pope.

Jaro's celebration of the Feast of Nuestra Señora de la Candelaria (Our Lady of the Candles) every February 2 is well-known in the Philippines. The fiesta features pageantry with a fiesta queen from one of the prominent families of the place, and a cockfight at the Iloilo Coliseum, where cockfighting aficionados from all over the Philippines converge.[3]

The district is notable for its large amount of nineteenth century architecture. Straddling the main plaza is the antique Jaro Catheral and the Palasyo, the Archbishop's residence.

Majority of the mestizo families from Iloilo came from this town, because it was a center and main port during Spanish period and many Spanish traders married natives and settled on the island.

Also found in the district is the St. Joseph Regional Seminary, in Cubay. It is a theology seminary, as St. Vincent Seminary is a juniorate and philosophy seminary.