The City of Seattle was a side-wheel driven steam-powered ferry built in 1888. This vessel was the first ferry to operate on Puget Sound. City of Seattle was also used in the San Francisco Bay area starting in 1913. The ferry was known as YFB54 when owned by the U.S. navy in World War II, and as Magdalena during naval service and for a time following the war. The upper works of the ferry have been mounted on a barge hull, and are now in use as a houseboat in Sausalito, California.

The City of Seattle was built in 1888 at Portland, Oregon by John Steffan and began regularly scheduled service on December 31, 1888.[1] The ferry had a wide lower deck, called the “driveway”, which carried wagons, horses and carts, as well as all passengers. On the upper deck there was a single pilot house, facing both ends, which was built around the smokestack.[1]

The ferry's first owners were the West Seattle Land and Improvement Company which placed the vessel on a route running between Seattle and Milton, in West Seattle. The Seattle terminus was at a dock located at First Avenue and Marion Street. Originally the fare to ride the City of Seattle was 15 cents, but it was soon reduced to 5 cents as part the owners' strategy to encourage purchase of its real estate developments in West Seattle.[1]

In the summer of 1889, City of Seattle was making 10 trips daily on the route. The trip was popular and well-to-do persons began buying houses in West Seattle. A cable tramway was built to carry ferry passengers from the West Seattle dock up the bluff where the Improvement Company's main development projects were. The vessel was quick, and could often complete the 8-mile (13 km) run in less than 2 minutes.[1]

The ferry encountered some competition, first from the small steamer Tacoma and entered regular service on June 27, 1907 on the Seattle – West Seattle route. City of Seattle was then shifted to run to the Luna amusement park then located at Duwamish Head. 1907 was the peak year for ferry transport on the Seattle-West Seattle run, with 103,000 passengers carried in July alone. After that, rising competition from the expanding network of street car lines over time proved too much for the West Seattle ferries, and City of Seattle was taken off the route in 1911.[1][3] 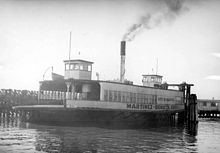 City of Seattle as configured for the Benicia-Martinez ferry route.

In 1913 the Improvement Company, through its subsidiary the Oregon & Washington Ferry & Nav. Co., sold City of Seattle to a California ferry concern, the Martinez and Benicia Ferry and Transportation Company, leaving only the West Seattle on the now money-losing route.[3] After a hazardous voyage south in the tow of a steam schooner, City of Seattle reached San Francisco Bay and was placed on the ferry route from Benicia across the Carquinez Strait to Martinez [1]

The new owners added second wheelhouse to the ferry, but never changed the vessel's name or the machinery. The ferry was also used on the route from Mare Island to Vallejo.

After the war, the vessel was acquired by the Mare Island Ferry Company and renamed Magdalena.[2] As of 1966 the ferry was owned by Sausalito resident Alexis Tellis, and registered as a yacht. The name was still City of Seattle, and propulsion was still by sidewheels, but the steam engines had been replaced by diesel power.[3] Later the vessel was placed on pilings, painted yellow, and used as a house and office for the owner of a marina known as the Yellow Ferry Harbor in Sausalito, California.[2]

The upper works of the ferry have been mounted on a concrete barge and are now in use as a houseboat at Sausalito, California.[5]