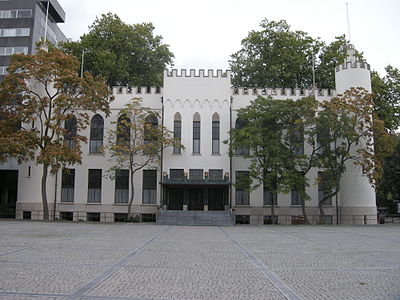 The Paleis-Raadhuis, the city hall of municipality Tilburg. 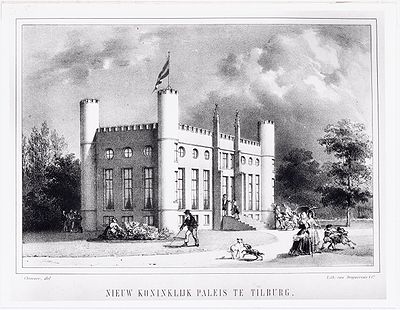 Lithography by Willem Cornelis Chimaer van Oudendorp (1822-1873) of the New Royal Palace in Tilburg in 1849. In the drawing there's a mistake. The artist drew in the façade of the palace only six of the original eight windows on both sides of the entrance adjoining series of windows.

The City hall of Tilburg or Palace-Council House (Dutch: Paleis-Raadhuis) is a former royal palace and part of the present city hall of the municipality Tilburg, in the Netherlands. The construction of the palace was commissioned by King William II of the Netherlands, who placed the foundation stone himself on the 13th of August 1847. The king wanted to have a country residence in Tilburg. Though, he never lived in the palace as he died on the 17th of March 1849, only 22 days before the completion of the palace at the 7th of April 1849.

The palace has been build by Adriaan Goijaerts, a well known contractor and carpenter from Tilburg. On the 7th of July 1847 Goijaerts accepted the commission from William II of the Netherlands for the sum of ƒ 57,000.- guilders. Goijaerts completed the palace at on the 7th of April 1849. Since it’s completion the building served different purposes. The palace has been rebuilt thoroughly twice, from 1865 to 1960 and from 1934 to 1936 to give the palace a different purpose. The palace has been used as a school and as the city hall of the municipality Tilburg. The school offered secular tuition on high school level. The Dutch painter Vincent van Gogh has been the school’s most famous student. In 1931 the palace was finally donated by the Dutch royal family to the municipality Tilburg. During the second world war the palace was used as an observation point to observe the night sky in order to detect hostile aeroplanes. The palace lost it’s main function in 1971 when a much larger and more modern building was completed. This building got connected to the palace through a sky bridge at the north side of the palace. Since then the Palace is majorly used as a location for wedding ceremonies, lectures, oath-takings and symposia.

The new royal palace got built in the backyard of the former palace. This former ‘palace’ was in fact a a row of houses pulled together; the crown prince purchased these in 1835 from a family called Frankenhoff. Crown prince William II had bought these houses behind the church of the Heike quarter, presently known as the Saint Denis church, and let the houses rebuild into a sober palace. Though, when William II succeeded his father in 1840 as king of the Netherlands, the former palace didn’t had the royal airs which befitted his new status. Thus a new palace had to be constructed. It was the boy’s dream of the king that was about to get fulfilled. The former palace has been demolished in 1847.

According the legend king William II has made the first sketches for his palace himself, after the neo-gothic building style he knew from his childhood in England. But it’s very likely that drawing teacher Frederik Lodewijk Huijgens of the royal military academy in Breda and royal master builder Jan C. Boon were involved into the draft.

Typical to the draft is the basement, which is for about the 60% subterranean and 40% above the ground. It was common among houses, castles and palaces. On top of the basement is localised the piano nobile. This was the most important and most impressive storey of the building and was majorly used to receive guests. Notable to this draft are the four rank and round stairway towers that adjoins the building at each of the four angles of the building. These form four independent stairwells and lead from the basement up to the piano nobile and the second floor. 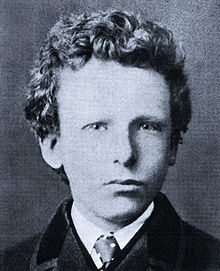 Vincent van Gogh's school picture. At the time when the photo was taken, Vincent was approximately 13 years old. 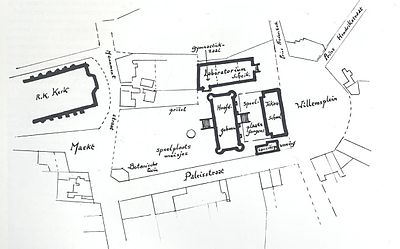 Survey of the Rijks-HBS Koning Willem II in 1866. Also the surrounding of the school is on the map, like the Saint Denis church. The buildings around the palace like the gym and the laboratory, which are both in one building, the art school and the caretaker's house were all demolished later.[1]

By the second half of the 19th century 28,000 people lived in Tilburg. The city was ready for a Rijks-HBS, a new type of high school for secular education. This new type of school was aimed at young people from the bourgeoisie to prepare them for 'higher' positions in society, and was better adapted than the popular Latin school to the economic demands of a constantly changing society. It was meant for that part of the middle class youth which didn't need a scientific education, but required a broad general knowledge to fulfil important positions in trade and industry.

Although the city council wanted to provide this new type of education to the city's inhabitants, Tilburg was not to receive any financial support from the state for the construction of a new school building. The city couldn't afford a new building, so it was suggested that the palace of King William II be used for the new school. However, the palace was still in the possession of the Dutch royal family. On the 30th of November 1863, the city council sent a letter to the secretary of the royal family, begging for authorisation to use the palace as a school building. Authorisation came in 1864 and in 1865 alterations to the building began. On the 9th of April 1866 the palace was opened as a school named: Koning Willem II (King William II). One of its first students would also become the most famous of its alumni. The Dutch painter Vincent van Gogh, then 13 years old, attended classes in 1866 and left the school for unknown reasons in 1868. With an average rating of 7,36, Vincent was an average student.

Controversial beginning and the continual growth

The first 25 years of the school’s existence were tough. There was a huge turnover of staff and the number of students remained unchanged. The lack of religious education caused a lot of criticism from the roman caltholic clergy. Initially the school offered tuition to boys only, in 1894 the first girl was signed up, though. Maria Bes, the math teacher’s daughter, she passed the exams in 1899 and went to Delft to study engeneering; she became one of the first female engeneers in the Netherlands. In the 1920’s electric light and central heating was installed in the building and the fifty year old school desks were replaced. In 1934 the school moved, due to a lack of space, to a new location at the Ringbaan Oost in Tilburg. 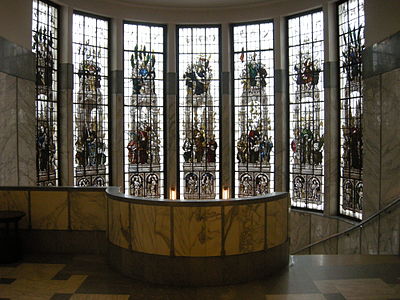 Stain glass windows in the half circular stairwell, made by Joep Nicolas.

In 1934 the palace is 85 years old and about 70 years it functioned as a school. The building was totally decrepitted and had to get renovated and altered. In 1931 when the building was still used as a school the city council already spoke about the possibility to use the palace as the new city hall of the municipality. Oscar Leeuw an architect from Nijmegen got commissioned by the Tilburg city council to alter the decrepitted school into a representative Palace-Council House. Oscar Leeuw tried to recondition the original character of the building. He brought back the long lost merlons and made the building more gothic than it has ever been by replacing the square windows with lancet windows. The thin and slender towers near the entrace with the pinnacles on them were replaced by a middle risalit with an entrance made in art deco style. When the alteration was finished in 1936, the Palace-Council House was brought into use by mayor Frans Vonk de Both on the 1st of August 1936.

Due to the alteration the Palace-Council House has been changed internally as well. The basement got an own entrance at the east side. The piano nobile was completely rearranged. In the nothern wing two wedding rooms were risen. In the southern wing the mayor’s room was located. At the east side, above the entrance to the basement a half circular balcuny was built. With a likewise half circular extension for a new and elegant stairwell which contains a broad marble spiral staircase which leads to the second floor. In the circular extension one can find stained glass windows made by stained-glass artist Joep Nicolas. The scenes formed in the stained glass express the virtues of a number of the administrators through figures from the classical antiquity. On the second floor three halls were built. One big wedding room in the north wing and a big hall for the city council itself, complete with a press tribune, in the southern wing. A smaller room was specially for the alderman, which is between the wedding room and the hall for the city council. On the lintel beam a fresco is made by Henri Sicking. It’s a symbolical representation of a prosperous future in an urban society of culture and economy. Expressed by a woman flanked by a man and a woman, while she writes on a banner which has been draped over a book support with the Latin words: 'CVLTVRA' and 'OECONOMIA' on it. The latter is derived from the Ancient Greek οἰκονομία. Respectively these words mean: 'culture' and 'economy'.