Herem
For the same Hebrew word, when used to mean a form of excommunication, see Cherem.

Herem or cherem (Hebrew: חרם, ḥērem), as used in the Hebrew Bible, means ‘devote’ or ‘destroy’.[1] It is also referred to as the ban. The term has been explained in different ways by scholars. It has been defined as "a mode of secluding, and rendering harmless, anything imperilling the religious life of the nation,"[2] or "the total destruction of the enemy and his goods at the conclusion of a campaign,"[3] or "uncompromising consecration of property and dedication of the property to God without possibility of recall or redemption.[1] J. A. Thompson suggests that herem meant that in the hour of victory all that would normally be regarded as booty, including the inhabitants of the land, was to be devoted to God. Thus would every harmful thing be burned out and the land purified.[4]

The word comes from a common semitic root H-R-M. In the Masoretic Text of the Hebrew Bible the verb form occurs 51 times, while the noun occurs 28 times.[5] Although the word itself simply means devotion to God (and is used this way in Leviticus 27:28), it most often refers to "a ban for utter destruction".[5] There is also a homonym, herem, meaning fisherman's net, which occurs 9 times in the Masoretic Text and is traditionally regarded as etymologically unrelated, according to Gesenius and Brown Driver Briggs Lexicons and older sources.[6]

In the Talmud the cognate verb and noun occur in the Aramaic forms, often transliterated as cherem in the singular, with the main meaning of excommunication, and in the plural hromim with the idea of devotion of items to a kohen.

This idea first appears in Numbers 21:2, and is translated in a variety of ways in English translations:

And Israel made a vow to the LORD, and said, "If You deliver this people into our hand, we will proscribe their towns."
—JPS Tanakh

And Israel vowed a vow unto the LORD, and said, If thou wilt indeed deliver this people into my hand, then I will utterly destroy their cities.
—Authorised Version

Then Israel made this vow to the LORD : "If you will deliver these people into our hands, we will totally destroy their cities."
—New International Version

Then the people of Israel made this vow to the Lord: "If you will hand these people over to us, we will completely destroy all their towns."
—New Living Translation

And Israel vowed a vow to the LORD and said, "If you will indeed give this people into my hand, then I will devote their cities to destruction."
—English Standard Version 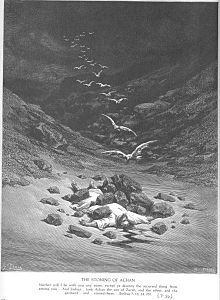 The Stoning of Achan by Gustav Doré. Achan failed to carry out the terms of herem, and according to Joshua 7, came under the ban himself.

In the Hebrew Bible

The word is often used in the Book of Joshua, where cities such as Jericho and Ai came under cherem. This meant they had to be completely destroyed, except for "the silver and gold and the articles of bronze and iron" which were to go into "YHWH's treasury" (Joshua 6:19). The following chapter describes how Achan kept back some items for himself, and was executed by stoning. Indeed, Achan is himself described as something "devoted to destruction" (Joshua 7:12).

Deuteronomy 20 also names six people groups who were to be under the ban: the Hittites, Amorites, Canaanites, Perizzites, Hivites and Jebusites. This has led to the conquest of Canaan being referred to as genocide. For example, Ra'anan Boustan calls this "a thoroughly violent commandment" which "in modern terms would be characterized as genocide."[7] 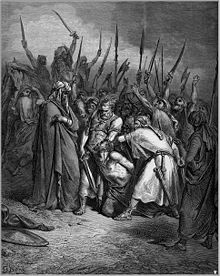 Gustave Doré, The Death of Agag. Agag was executed by Samuel as part of God's command to put the Amalekites under herem (1 Samuel 15).

The concept of herem also appears in 1 Samuel 15, where Saul "totally destroyed" (verse 8, NIV) the Amalekites with the sword, but spared their king, Agag, and kept "the best of the sheep and cattle, the fat calves and lambs—everything that was good." For this, Saul is rebuked by Samuel, who reminds him that God had commanded him to "completely destroy" the Amalekites (verse 15). Samuel "hacked Agag to pieces" himself (verse 33, ESV).

William Dumbrell suggests that "the ban appears to have been conceived as an acknowledgement of Yahweh's help."[11] He also notes that "everything likely to contaminate Israel religiously" was destroyed, and thus the institution of the ban was "designed not to counter a military threat but to counter a religious threat."[12] Similarly, Balchin argues that "drastic action was required to keep Israel in holy existence."[13] Lilley argues that "Israel, like other contemporary societies, did not recognise any distinction between sacred and secular war," and that "holy war" is not a biblical term, "but one invented or at least appropriated by commentators."[1] Lilley goes on to suggest that essence of the idea of herem is an "irrevocable renunciation of any interest" in the object 'devoted', and thus "so far as persons are concerned, the options of enslavement and treaty are not available." He contests the idea that it always involved things imperilling the religious life of the nation, arguing that these things "were to be destroyed out of hand, not given to the sanctuary."[14]

Longman and Reid suggest that we should see herem as a "sacrifice of the occupants of Canaan in the interest of securing the purity of the land."[15]

The concept of herem was not unique to Israel.[citation needed] The Mesha Stele contains a statement by King Mesha of Moab that he captured the town of Nebo and killed all seven thousand people there, "for I had devoted them to destruction for (the god) Ashtar-Chemosh."[16]

Theologians and other scholars have commented on the apparent ethical and moral dilemmas posed by the wars of extermination, particularly the killing of women and children.[17]

Maimonides applies the rules from Deuteronomy 20:10 (the rules governing discretionary wars) to the war on the Canaanite nation, and suggests that the commandment to exterminate the Canaanites was not absolute. He writes that Joshua gave the Canaanites three options: to flee, to remain and make peace with the Israelites, or to fight.[18]

Rabbi Gunther Plaut asserted that the Torah, itself, never addresses the morality of the wars of extermination.[19] Biblical scholar Sidney Hoenig discussed the "brutality" in the book of Joshua, but concluded that the "battle is only in honor of God".[20] The Mennonite scholar John Howard Yoder suggests that the concept of herem was unique in relation to the morality of the time not in its violence, but in ensuring that "war does not become a source of immediate enrichment through plunder",[21] and hence was the beginning of a trajectory that would lead ultimately to the teaching of nonviolence. Scholars Ian Lustick and Leonard B. Glick quote Shlomo Aviner as saying "from the point of view of mankind's humanistic morality we were in the wrong in [taking the land] from the Canaanites. There is only one catch. The command of God ordered us to be the people of the Land of Israel".[22] Scholar Carl Ehrlich states that Jewish commentators have tended to be silent regarding the morality of the violence in the Book of Joshua.[23] Prominent atheist Richard Dawkins asserts that the commandments to exterminate are immoral.[24]

Scholars point out that collective punishment, particularly punishment of descendants for transgressions committed by ancestors, is common in the Jewish Bible.[25]

Scholar Pekka Pitkanen asserts that Deuteronomy involves "demonization of the opponent" which is typical of genocide, and he asserts that the genocide of the Canaanites was due to unique circumstances, and that "the biblical material should not be read as giving license for repeating it."[34]

Scholar Philip Jenkins characterizes the warfare of the Bible as genocidal, and considers the laws of warfare in the Qu'ran to be more humane than the Biblical rules.[35] 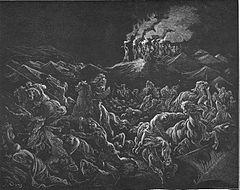 The Midianites Are Routed by Gustave Dore

Several justifications and explanations for the extreme violence associated with the wars of extermination have been offered, some found in the Jewish Bible, others provided by Rabbinic commentators, and others hypothesized by scholars.

In Deut 20:16-18 God tells the Israelites to exterminate the Canaanite nations, "otherwise, they will teach you to follow all the detestable things they do in worshiping their gods, and you will sin against the lord your God". Another reason, justifying the war against the Midianites, was revenge for Midian's role in Israel's apostate behavior during the Heresy of Peor (Numbers 25:1-18).[36]

In Talmudic commentary, the Canaanite nations were given the opportunity to leave, and their refusal to leave "lay the onus of blame for the conquest and Joshua's extirpation of the Canaanites at the feet of the victims."[38] Another explanation of the exterminations is that God gave the land to the Canaanites only temporarily, until the Israelites would arrive, and the Canaanites extermination was punishment for their refusal to obey God's desire that they leave.[39] Another Talmudic explanation - for the wars in the Book of Joshua - was that God initiated the wars as a diversionary tactic so Israelites would not kill Joshua after discovering that Joshua had forgotten certain laws.[40]

Some scholars trace the extermination of the Midianites to revenge for the fact that Midianites were responsible for selling Joseph into slavery in Egypt (Genesis 37:28-36).[41]

Association with violent attitudes in the modern era

Some analysts have associated the biblical commandments of extermination with violent attitudes in modern era.

According to Ian Lustick, leaders of the Jewish fundamentalist movement Gush Emunim, such as Hanan Porat, consider the Palestinians to be like Canaanites or Amalekites, and suggest that infers a duty to make merciless war against Arabs who reject Jewish sovereignty.[42] Atheist commentator Christopher Hitchens discusses the association of the "obliterated" tribes with modern troubles in Palestine.[43]

Biblical scholar Niels Peter Lemche asserts that European colonialism in the nineteenth century was ideologically based on the biblical narratives of conquest and extermination. He also states that European Jews who migrated to Palestine relied on the biblical ideology of conquest and extermination, and considered the Arabs to be Canaanites.[44] Scholar Arthur Grenke claims that the view or war expressed in Deuteronomy contributed to the destruction of Native Americans and to the destruction of European Jewry.[45]

Scholar Nur Masalha writes that the "genocide" of the extermination commandments has been "kept before subsequent generations" and served as inspirational examples of divine support for slaughtering enemies.[46] Scholar Ra'anan S. Boustan asserts that militant Zionists have identified modern Palestinians with Canaanites, and hence as targets of violence mandated in Deut 20:15-18.[47] Scholar Leonard B. Glick states that Jewish fundamentalists in Israel, such as Shlomo Aviner, consider the Palestinians to be like biblical Canaanites, and that some fundamentalist leaders suggest that they "must be prepared to destroy" the Palestinians if the Palestinians do not leave the land.[48] Scholar Keith Whitelam asserts that the Zionist movement has drawn inspiration from the biblical conquest tradition, and Whitelam draws parallels between the "genocidal Israelites" of Joshua and modern Zionists.[49]

Wars of extermination are of historical interest only, and do not serve as a model within Judaism.[50] A formal declaration that the “seven nations” are no longer identifiable was made by Joshua ben Hananiah, around the year 100 CE.[50]

Scholar Moshe Greenberg asserts that the laws of extermination applied only to the extinct tribes, and only to their contemporary generations of Israelites.[51][52] Scholar Carl Ehrlich states the biblical rules of extermination provide guidance to modern Israelis not for genocidal purposes, but rather simply as models for reclaiming the land of Israel.[53]