Charles de Gaulle (R91) is the flagship of the French Navy (Marine Nationale) and the largest Western European aircraft carrier. She is the tenth French aircraft carrier, the first French nuclear-powered surface vessel, and the first and so far only nuclear-powered carrier completed outside of the United States Navy. She is named after French statesman and general Charles de Gaulle.

The ship carries a complement of Dassault-Breguet Super Étendard, Dassault Rafale M and E-2C Hawkeye aircraft, as well as modern electronics and Aster missiles. She is a CATOBAR-type carrier that uses a shorter version of the catapult system installed on the US Nimitz class carriers, the 75 m C13-3 steam catapult.

The carrier replaced Foch, a conventionally-powered aircraft carrier, in 2001. Clemenceau and Foch were completed in 1961 and 1963 respectively; the requirement for a replacement was identified in the mid-1970s.

The hull was laid down in April 1989 at the DCNS Brest naval shipyard. The carrier was completed in May 1994 and at 35,500 tonnes was the largest warship launched in Western Europe since 1951.[citation needed] She was to be named Richelieu in 1986 by the French president at the time, François Mitterrand, after the famous French politician Armand-Jean du Plessis, Cardinal and Duc de Richelieu (following a traditional name for capital ships in the French Navy, see battleship Richelieu for instance).[3] On 7 February 1987, however, after a ferocious row, the name of the ship was changed to Charles de Gaulle by the Gaullist Prime Minister at the time, Jacques Chirac.

Construction quickly fell behind schedule as the project was starved of funding, which was worsened by the economic recession in the early 1990s.[citation needed] Total costs for the vessel would top €3 billion. Work on the ship was suspended altogether on four occasions: 1990, 1991, 1993 and 1995.[3] The ship was commissioned on 18 May 2001, five years behind the projected deadline.

In 1993, it was alleged by The Guardian that a group of engineers inspecting the vessel during her construction were British Secret Intelligence Service (MI6) operatives, believed to have been evaluating the method of shielding the nuclear reactors, amongst other technical details.[4] However, the newspaper published a denial by both the British government and the Direction de la surveillance du territoire (DST) (in English: Directorate of Territorial Surveillance) that there had been any incident.[5] 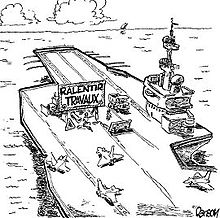 Charles de Gaulle entered sea trials in 1999. These identified the need to extend the flight deck to safely operate the E-2C Hawkeye. This operation sparked negative publicity, however, as the same tests had been conducted on both Foch and Clemenceau when the F-8E(FN) Crusader fighter had been introduced. The 5 million francs for the extension was 0.025% of the total budget for Charles de Gaulle project.

During the night of 9 November 2000, in the Western Atlantic while en route toward Norfolk, Virginia, the port propeller broke and the ship had to return to Toulon to replace the faulty unit. The investigations that followed showed similar structural faults in the other propeller and in the spare propellers: bubbles in the one-piece copper-aluminium alloy propellers near the centre. The fault was blamed on the supplier, Atlantic Industries, which had already gone bankrupt. To make matters worse, all documents relating to the design and fabrication of the propellers had been lost in a fire. As a temporary solution, the less advanced spare propellers of Clemenceau and Foch were used, limiting the maximum speed to 24 knots (44 km/h) instead of the contractual 27 knots (50 km/h).

On 5 March 2001, Charles de Gaulle went back to sea with two older propellers and sailed 25.2 knots (47 km/h) on her trials. Between July and October, Charles de Gaulle had to be refitted once more due to abnormal noises, as loud as 100 dB, near the starboard propeller, which had rendered the aft part of the ship uninhabitable.

On 8 November 2001, a sailor performing a routine maintenance task lost consciousness due to a toxic gas leak. A non-commissioned officer attempted to rescue him and collapsed as well. They were rescued by the on-board medical team and sent to Toulon Hospital. Both survived.

On 16 September 2001, the French press reported slightly higher than acceptable radioactivity levels aboard Charles de Gaulle, thought to be caused by a faulty isolation element. It was later discovered that the radioactivity levels were normal, but that the regulations concerning acceptable radioactivity levels had changed. While the United States was preparing its response to the September 11, 2001 attacks in the form of Operation Enduring Freedom, the media complained about the lack of deployable French military power. At the same time, the Defence Commission reported the maintenance of the Fleet to be substandard. In this context, Charles de Gaulle, then under repairs, was again an object of criticism, with former President Valéry Giscard d'Estaing describing it as a "half-aircraft-carrier".

On 11 October 2001, the frigate Cassard, four AWACS aircraft and Charles de Gaulle were involved in a successful trial of the Link 16 high-bandwidth secure data network. The network allows real-time monitoring of the airspace from the South of England to the Mediterranean Sea. The collected data were also transmitted in real time to the Jean Bart through the older Link 11 system.

A rare occurrence of a 5-country multinational fleet of the NATO countries, the Netherlands, France, the United States, Italy, and the United Kingdom, during Operation Enduring Freedom in the Oman Sea 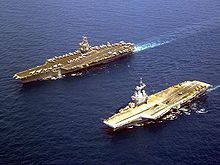 On 18 February 2002, a Helios observation satellite spotted abnormal activities near Gardez. The next day, after American Special Forces in the region confirmed these observations, Charles de Gaulle launched two reconnaissance Super Étendards. On 20 February, British and US forces entered the valley and Operation Anaconda began in early March.

In March, Super Étendards and six Mirage 2000 aircraft carried out airstrikes against targets claimed to be al Qaeda. A few targets suggested by US forces were denied out of fear of hitting civilians. Nevertheless, French involvement was complimented on 11 March 2002 by US President George W. Bush, who mentioned "our good ally, France, has deployed nearly one-fourth of its navy to support Operation Enduring Freedom".[6] At this point, the French air complement had been increased to 16 Super Étendards, 6 Mirage 2000 D, 5 Rafales, and two Hawkeye AWACS. From February, the air wings of Charles de Gaulle and USS John C. Stennis landed on each other's decks as a means of strengthening the ties between the allies.

On 2 May, Charles de Gaulle arrived in Singapore for relief and returned to Oman on 18 May.

In June 2002 while Charles de Gaulle was in the Arabian Sea, armed Rafale fighters conducted combat air-patrols with the United States Navy off the coast of India and Pakistan,[7][8] marking a significant point in the Rafale M's operational career and its integration with the carrier.[9]

On 9 October, the CrossMed (The Regional Operational Centre for Monitoring and Rescue in the Mediterranean Sea) received a distress call from the 8-metre Babolin, whose hull was leaking. Charles de Gaulle, on manoeuvres in the region, sent a helicopter that airlifted the three-man crew, despite 35-knot (65 km/h) wind, troubled sea, and bad visibility.

Charles de Gaulle participated in further actions as part of Operation Enduring Freedom in 2005. It returned to Southwest Asia in May 2006 and shortly after supported coalition efforts over Afghanistan. The aircraft carrier regularly participates in the annual bilateral naval exercises between the Indian and French navies[10] called 'Varuna'.[11]

Charles de Gaulle's first major overhaul began in September 2007. The highlight of this 15-month refit was the refueling of the nuclear power plant, a necessary step after six years in service, during which Charles de Gaulle sailed the equivalent of 12 times around the world, spent 900 days at sea, and performed 19,000 catapult launches.[12] Several improvements will also be made, including the installation of new propellers. These will allow the Charles de Gaulle to reach her design speed of 27 knots (50 km/h), replacing the vintage propellers used as a stop-gap since 2001. Aircraft maintenance and weapons stores will also be upgraded to allow operation of new Rafale F3 fighters armed with ASMP-A nuclear missiles and SCALP EG cruise missiles, and satellite communications bandwidth will be increased tenfold. The refit was completed in December 2008 but following technical problems in March 2009 the carrier is back in Toulon for repairs. An intensive work-up period is planned to bring the Charles de Gaulle and her airgroup back to operational status.

On 14 October 2010, a four month cruise was cut down to a single day when the ship suffered an electrical fault in its propulsion system.[13]

The force would help allied navies fight piracy off the coast of Somalia and send jets to support NATO in the skies above Afghanistan."[16]

Once on station, Task Force 473 joined two U.S. Navy carrier strike groups operating in the Persian Gulf (pictured), the Carrier Strike Group Nine led by the USS Abraham Lincoln (CVN-72) and Carrier Strike Group Ten led by the USS Harry S. Truman (CVN-75) .[16] On 28 November 2010, according to an Associated Press dispatch, the French Ministry of Defense announced that a French Rafale fighter jet crashed near the Charles de Gaulle which was operating 60 miles (100 kilometres) off the coast of Pakistan in the Arabian Sea in support of coaltion forces in Afghanistan. The pilot parachuted to safety and was picked up by helicopter, and the cause of the crash was under investigation.[18] In December 2010, during its deployment to the Persian Gulf, the British Type 22 frigate Cumberland rotated from its maritime security patrol to escort Charles de Gaulle in support of coalition military operations in Afghanistan. This represented an example of interoperability pursuant to the recently-ratified Anglo-Franco defence cooperation treaty.[19]

Between 7–14 January 2011, Task Force 473 participated with bilateral naval exercise, code named Varuna 10, with the Indian Navy. Indian naval units participating in Varuna 10 included the aircraft carrier Viraat, the frigates Godavari and Ganga; and the diesel-electric submarine Shalki. Varuna 10 was a two-phase naval exercise, with the harbor phase taking place between 7–11 January and the sea phase between 11–14 January in the Arabian Sea.[17][20] Task Force 473 paid a port visit to Goa between 7–14 January 2001.[21] The carrier Charles de Gaulle and the frigate Fobin also paid a goodwill visit to Khor Fakkan, United Arab Emirates, on 30 January 2011, docking at its container terminal facilities.[22]

On 20 March 2011, the Charles de Gaulle was deployed to the Mediterranean Sea to enforce United Nations Security Council Resolution 1973 which called for a no-fly zone over Libya.[23] Accompanying the Charles de Gaulle were the frigates Dupleix and Aconit and the fleet replenishment tanker Meuse.[24] During Unified Protector, the air fleet has flown 1.350 sorties during the war on Libya.

Integration in the future navy

The French Navy is theoretically a two-carrier navy, mainly to ensure that at least one ship is operational at all times even if the other is under repair. This scheme requires another aircraft carrier to be built though, as the Charles de Gaulle is the only aircraft carrier currently serving.

Cost considerations have made equipment standardization a necessity. In this context, there is a possibility of collaboration with Britain for future aircraft carriers and Thales made the design for the Queen Elizabeth-class aircraft carrier,[25] which may be modified as the Future French aircraft carrier. Steps have been taken by both countries to make such a scenario possible: the new carrier had to be conventionally propelled to meet the requirements of the Royal Navy. France favours nuclear propulsion, and a study is being conducted to see if it is more cost efficient than gas turbines.[26]