Overweight
This article is about the medical term. For the stock market term, see overweight (stock market).

Overweight is generally defined as having more body fat than is optimally healthy. Being overweight is a common condition, especially where food supplies are plentiful and lifestyles are sedentary. As much as 64% of the United States adult population is considered either overweight or obese, and this percentage has increased over the last four decades.[1]

Excess weight has reached epidemic proportions globally, with more than 1 billion adults being either overweight or obese.[2] Increases have been observed across all age groups.

A healthy body requires a minimum amount of fat for the proper functioning of the hormonal, reproductive, and immune systems, as thermal insulation, as shock absorption for sensitive areas, and as energy for future use. But the accumulation of too much storage fat can impair movement and flexibility, and can alter the appearance of the body.

The degree to which a person is overweight is generally described by body mass index (BMI). Overweight is defined as a BMI of 25 or more, thus it includes pre-obesity defined as a BMI between 25 and 30 and obesity as defined by a BMI of 30 or more.[3][4] Pre obese and overweight however are often used interchangeably thus giving overweight a common definition of a BMI of between 25 -30. There are however several other common ways to measure the amount of adiposity or fat present in an individual's body.

The body mass index (BMI) is a measure of a person's weight taking into account their height. It is given by the formula: BMI equals a person's weight (mass) in kilograms divided by the square of the person's height in metres. The units therefore are kg/m2 but BMI measures are typically used and written without units.

BMI provides a significantly more accurate representation of body fat content than simply measuring a person's weight. It is only moderately correlated with both body fat percentage and body fat mass (R2 of 0.68.)[5] It does not take into account certain factors such as pregnancy or bodybuilding; however, the BMI is an accurate reflection of fat percentage in the majority of the adult population.

The body volume index (BVI) was devised in 2000 as a computer, rather than manual, measurement of the human body for obesity and an alternative to the BMI

Body volume index uses 3D software to create an accurate 3D image of a person so BVI can differentiate between people with the same BMI rating, but who have a different shape and different weight distribution. 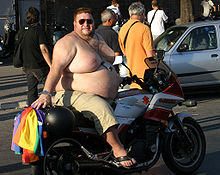 An obese man on a motorcycle 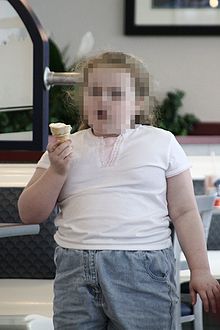 BVI measures where a person’s weight and the fat are located on the body, rather than total weight or total fat content and places emphasis on the weight carried around the abdomen, commonly known as central obesity. There has been an acceptance in recent years that abdominal fat and weight around the abdomen constitute a greater health risk.[6]

The person's weight is measured and compared to an estimated ideal weight. This is the easiest and most common method, but by far the least accurate, as it only measures one quantity (weight) and often does not take into account many factors such as height, body type, and relative amount of muscle mass.

The skin at several specific points on the body is pinched and the thickness of the resulting fold is measured. This measures the thickness of the layers of fat located under the skin, from which a general measurement of total amount of fat in the body is calculated. This method can be reasonably accurate for many people, but it does assume particular patterns for fat distribution over the body which may not apply to all individuals, and does not account for fat deposits which may not be directly under the skin. Also, as the measurement and analysis generally involves a high degree of practice and interpretation, for an accurate result it must be performed by a professional and cannot generally be done by patients themselves.

A small electrical current is passed through the body to measure its electrical resistance. As fat and muscle conduct electricity differently, this method can provide a direct measurement of the body fat percentage, in relation to muscle mass. In the past, this technique could only be performed reliably by trained professionals with specialized equipment, but it is now possible to buy home testing kits which allow people to do this themselves with a minimum of training. Despite the improved simplicity of this process over the years, however, there are a number of factors which can affect the results, including hydration and body temperature, so it still needs some care when taking the test to ensure that the results are accurate.

Considered one of the more accurate methods of measuring body fat, this technique involves complete submersion of a person in water, with special equipment to measure the person's weight while submerged. This weight is then compared with "dry weight" as recorded outside the water to determine overall body density. As fat is less dense than muscle, careful application of this technique can provide a reasonably close estimate of fat content in the body. This technique does, however, require expensive specialized equipment and trained professionals to administer it properly.

Originally developed to measure bone density, DEXA imaging has also come to be used as a precise way to determine body fat content by using the density of various body tissues to identify which portions of the body are fat. This test is generally considered to be very accurate, but requires a great deal of expensive medical equipment and trained professionals to perform.

The most common method for discussing this subject and the one used primarily by researchers and advisory institutions is BMI. Definitions of what is considered to be overweight vary by ethnicity. The current definition proposed by the US National Institutes of Health (NIH) and the World Health Organization (WHO) designates whites, Hispanics and blacks with a BMI of 25 or more as overweight. For Asians, overweight is a BMI between 23 and 29.9 and obesity for all groups is a BMI of 30 or more.

BMI, however, does not account extremes of muscle mass, some rare genetic factors, the very young, and a few other individual variations. Thus it is possible for an individuals with a BMI of less than 25 to have excess body fat, while others may have a BMI that is significantly higher without falling into this category.[7] Some of the above methods for determining body fat are more accurate than BMI but come with added complexity.

If an individual is overweight and has excess body fat it could, but won't always, create or lead to health risks. Reports are surfacing, however, that being mildly overweight to slightly obese – BMI being between 24 and 31.9 – may be actually beneficial and that people with BMI between 24 and 31.9 could actually live longer than normal weight or underweight persons.[8][9] 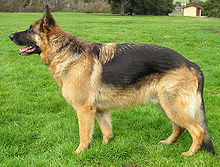 Animals can suffer from obesity as well. This German Shepherd dog is noticeably overweight.

While the negative health outcomes associated with obesity are accepted within the medical community, the health implications of the overweight category are more controversial. The generally accepted view is that being overweight causes similar health problems to obesity, but to a lesser degree. Adams et al. estimated that the risk of death increases by 20 to 40 percent among overweight people,[10] and the Framingham heart study found that being overweight at age 40 reduced life expectancy by three years.[11]

Being overweight has been identified as a cause of cancer, and is projected to overtake smoking as the primary cause of cancer in developed countries as cases of cancer linked to smoking dwindle.[14]

Psychological well-being is also at risk in the overweight individual due to social discrimination. However, children under the age of eight are normally not affected.[15]

Being overweight does not increase mortality in older people.[16]

Being overweight is generally caused by the intake of more calories (by eating) than are expended by the body (by exercise and everyday living). Factors which may contribute to this imbalance include:

People who have insulin dependant diabetes and chronically overdose insulin may gain weight, while people who already are overweight may develop insulin tolerance, and in the long run type II diabetes.

A large number of people undergo some form of treatment to attempt to reduce their weight, usually either in an attempt to improve their health, to improve their lifestyle, or for cosmetic reasons. The generally recommended treatment for being overweight is a modified or controlled diet in conjunction with increased physical exercise. For those who are obese rather than overweight, more intensive therapies such as anti-obesity drugs and/or bariatric surgery are sometimes used.

Studies suggest that reducing calorie intake by itself (dieting) may have short-term effects but does not lead to long-term weight loss, and can often result in gaining back all of the lost weight and more in the longer term. For this reason, it is generally recommended that weight-loss diets not be attempted on their own but instead in combination with increased exercise and long-term planning and weight management.

The health benefits of weight loss are also somewhat unclear. While it is generally accepted that for significantly obese patients, losing weight can reduce health risks and improve quality of life, there is some evidence to suggest that for merely overweight patients, the health effects of attempting to lose weight may actually be more detrimental than simply remaining overweight.[17] Moreover, for all individuals, repeatedly losing weight and then gaining it back ("weight cycling" or "yo-yo dieting"), is believed to do more harm than good and can be the cause of significant additional health problems. This is caused by the loss of more muscle than fat.