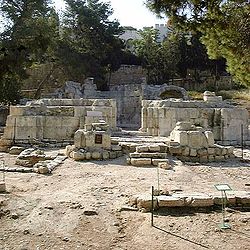 The Byzantine Basilica of Emmaus Nicopolis (5th-7th c. AD), restored by Crusaders during the 12th c. 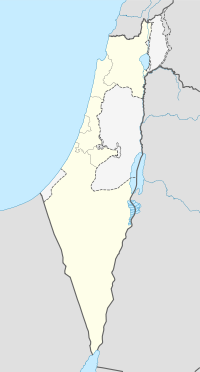 Emmaus Nicopolis (lit. City of Victory) was the Roman name for a city associated with the Emmaus of the New Testament, where Jesus is said to have appeared after his death and resurrection. In the modern age, the site was the location of the Palestinian Arab village of Imwas, near the Latrun junction, between Jerusalem and Tel Aviv, before its depopulation and destruction in 1967. Emmaus Nicopolis was the name of the city from the 3rd century CE until the conquest of Palestine by the forces of the Rashidun Caliphate in 639. The site today is located in the West Bank inside Canada Park.

Emmaus Nicopolis appears on Roman geographical maps. The Peutinger Table situates it about 19 miles (31 km) west of Jerusalem, while the Ptolemy map shows it at a distance of 20 miles (32 km) from the city. This location is confirmed by ancient sources and translations of the Gospel of Luke (e. g. Codex Sinaiticus), which give the distance between biblical Emmaus and Jerusalem as 160 stadia. The geographical position of Emmaus is described in the Jerusalem Talmud, Tractate Sheviit 9.2 [1]:

Emmaus is mentioned in the Gospel of Luke[3] as the village where Jesus appeared to his disciples after his crucifixtion and resurrection:

That very day two of them were going to a village (one hundred and) sixty stadia away from Jerusalem called Emmaus, and they were speaking about all the things that had occurred. And it happened that while they were speaking and debating, Jesus himself drew near and walked with them, but their eyes were prevented from recognizing him … As they approached the village to which they were going, he gave the impression that he was going on further. But they urged him, ‘Stay with us, for it is nearly evening and the day is declining.’ So he went in to stay with them. And it happened that, while he was with them at table, he took bread, said the blessing, broke it, and gave it to them. With that their eyes were opened and they recognized him.

Due to its strategic position, Emmaus played an important administrative, military and economic role in history. The first mention of Emmaus occurs in the 1st book of Maccabees, chapters 3-4, in the context of Judas the Maccabee’s wars against the Greeks (2nd century BCE).

During the Hasmonean period, Emmaus became a regional administrative centre (toparchy) in the Ayalon Valley.[4] Josephus Flavius mentions Emmaus in his writings several times.[5] He speaks about the destruction of Emmaus by the Romans in the year 4 B. C.[6]

After the defeat of the Bar-Kochba’s revolt in the first half of the 2nd century CE, Romans and Samaritans settled in Emmaus. In the early 3rd century CE, a Christian scholar and writer born in Jerusalem, Julius Africanus, lived in Emmaus.[7] According to Eusebius of Caesarea, St. Jerome, Philip of Side and others, Africanus led a delegation of local residents to the Roman emperor Elagabalus, obtaining for Emmaus the status of a city (polis) and the name of "Nicopolis," which it bore during the late Roman period and throughout the Byzantine period. As St. Eusebius writes,

Emmaus, whence was Cleopas who is mentioned by the Evangelist Luke. Today it is Nicopolis, a famous city of Palestine.[8]

During the Byzantine period Emmaus-Nicopolis became a big city and a bishopric. A large church complex was erected on the spot of the apparition of the risen Christ, which served as a place of pilgrimage, and whose ruins still exist today. After the Muslim conquest in the 7th century, Emmaus went back to being called "Amwas" or "Imwas", but lost its importance as a regional centre.

During the Crusader period, the Christian presence resumed at Emmaus, and the Byzantine church was restored. However, the memory of the apparition of the risen Jesus at Emmaus also started to be celebrated in three other places in the Holy Land: Motza ( ca. 4 m./6 km. west of Jerusalem), Qubeibe (ca. 7 m./12 km northwest of Jerusalem) Abu Ghosh (ca. 7 miles/12 km west of Jerusalem).

The Arab village of Amwas was identified once again as the biblical Emmaus and the Roman-Byzantine Nicopolis by scholars in the 19th century, including Edward Robinson(1838–1852),[9] M.-V. Guérin (1868), Charles Simon Clermont-Ganneau (1874), and J.-B. Guillemot (1880–1887). In addition, a local saint named Blessed Mariam of Jesus Crucified, a nun of the Carmelite monastery of Bethlehem, had a revelation in 1878 in which Jesus indicated Amwas was the Gospel’s Emmaus. Thanks to this revelation, the holy place of Emmaus was acquired by the Carmelite monastery from the Muslims, excavations were carried out, and the flow of pilgrims to Emmaus-Nicopolis resumed.

Following the 1948 partition of Palestine to form the state of Israel, the village of Amwas fell within the West Bank territory under Jordanian control. However it was captured by Israeli forces during the Six Day War of 1967, and subsequently its mixed Muslim and Christian Arab population was driven out and the village razed to the ground, to become part of Canada Park.[10] 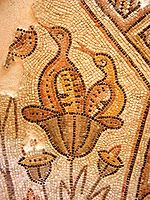 Archaeological excavations in Imwas started in the late 19th century and continue nowadays: Clermont-Ganneau (1874), J.-B. Guillemot (1883–1887), Dominican Fathers L.-H. Vincent & F.-M. Abel (1924–1930),[11] Y. Hirschfeld (1975)[12]., M. Gichon (1978),[13] M. Louhivuori, M. Piccirillo, V. Michel, K.-H. Fleckenstein (since 1994).[14] During excavations in Canada Park ( Ayalon forest) ruins of Emmaus fortifications from the Hasmonean era were discovered, along with a Roman bathhouse from the 3rd century CE, Jewish burial caves from the 1st century CE, Roman-Byzantine hydraulic installations, oil presses and tombs. Other findings were coins, oil lamps, vessels, jewelry. The eastern (rear) three-apsidal wall of the Byzantine church was cleared, with an external baptistery and polychrome mosaics, as well as walls of the Crusader church which were built against the central Byzantine apse (12th century). In the area of Emmaus, several Hebrew, Samaritan, Greek and Latin inscriptions carved on stones have been found.

Identification with the Gospel site

Most manuscripts of the Gospel of Luke which came down to us indicate the distance of 60 stadia (ca. 7 m./12 km) between Jerusalem and Emmaus. However, there are several manuscripts which state the distance as 160 stadia (19 m./30 km). These include the uncial manuscripts א (Codex Sinaiticus), Θ, Ν, Κ, Π, 079 and cursive (minuscule) manuscripts 157, 265, 1079, 1604, 1219, 1223, as well as ancient translations into Latin (some manuscripts of the Vetus Latina,[15] high-quality manuscripts of the Vulgate [16]), in Aramaic,[17] Georgian and Armenian languages. The version of 60 stadia has been adopted for the printed editions of the Gospel of Luke since the 16th century. The main argument against the version of 160 stadia claims that it is impossible to walk such a distance in one day. In keeping with the principle of Lectio difficilior, lectio verior, the most difficult version is presumed to be genuine, since ancient copyists of the Bible were inclined to change the text in order to facilitate understanding, but not vice versa. One should also note that it is possible to walk from Jerusalem to Emmaus-Nicopolis and back in one day.

The ancient Jewish sources (1 Maccabees, Josephus Flavius, Talmud and Midrash) mention only one village called Emmaus in the area of Jerusalem: Emmaus of Ajalon Valley.[18] For example, in the “Jewish War” (4, 8, 1) Josephus Flavius mentions that Vespasian placed the 5th Macedonian Legion in Emmaus. This has been confirmed by archaeologists who have discovered inscribed tombstones of the Legion’s soldiers in the area of Emmaus-Nicopolis.[19] (The village of Motza, located 30 stadia (ca. 4 miles) away from Jerusalem, is mentioned in medieval Greek manuscripts of the “Jewish war” of Josephus Flavius (7,6,6) under the name of Ammaus, apparently as a result of copyists’ mistake)[20]..

The ancient Christian tradition of the Church fathers, as well as pilgrims to the Holy Land during the Roman-Byzantine period, unanimously recognized Nicopolis as the Emmaus in the Gospel of Luke. (Origen (presumably), Eusebius of Caesarea,[21] St. Jerome,[22] Hesychius of Jerusalem,[23] Theophanes the Confessor,[24] Sozomen,[25] Theodosius,[26] etc.