Citrus canker is a disease affecting citrus species that is caused by the bacterium Xanthomonas axonopodis. Infection causes lesions on the leaves, stems, and fruit of citrus trees, including lime, oranges, and grapefruit. While not harmful to humans, canker significantly affects the vitality of citrus trees, causing leaves and fruit to drop prematurely; a fruit infected with canker is safe to eat but too unsightly to be sold.

The disease, which is believed to have originated in South East Asia, is extremely persistent when it becomes established in an area. Citrus groves have been destroyed in attempts to eradicate the disease. Brazil and the United States are currently suffering from canker outbreaks.

Xanthomonas axonopodis is a rod shaped gram negative bacterium with polar flagella. The bacterium has a genome length approximately 5 Mbp. There are a number of types of citrus canker disease caused by different pathovars and variants of the bacterium:[1] 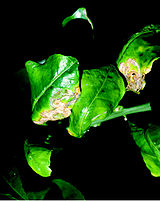 Plants infected with citrus canker have characteristic lesions on leaves, stems, and fruit with raised, brown, water-soaked margins, usually with a yellow halo or ring effect around the lesion. Older lesions have a corky appearance, still in many cases retaining the halo effect. The bacterium propagates in lesions in leaves, stems, and fruit. The lesions ooze bacterial cells that, when dispersed by windblown rain, can spread to other plants in the area. Infection may spread further by hurricanes. The disease can also be spread by from contaminated equipment, and by transport of infected or apparently healthy plants. Due to latency of the disease, a plant may appear to be healthy, but actually be infected.

Citrus canker bacteria can enter through a plant's stomata or through wounds on leaves or other green parts. In most cases, younger leaves are considered to be the most susceptible. Also, damage caused by Citrus Leaf Miner larvae (Phyllocnistis citrella) can be sites for infection to occur. Within a controlled laboratory setting, symptoms can appear in 14 days following inoculation into a susceptible host. In the field environment, the time for symptoms to appear and be clearly discernible from other foliar diseases varies; it may be on the order of several months after infection. Lower temperature increases the latency of the disease. Citrus canker bacteria can stay viable in old lesions and other plant surfaces for several months.

The disease can be detected in groves and on fruit by the appearance of lesions. Early detection is critical in quarantine situations. Bacteria can be tested for pathogenicity by inoculating multiple citrus species with the bacterium. Additional diagnostic tests (antibody detection, fatty-acid profiling, and genetic procedures using polymerase chain reaction (PCR) can be conducted to confirm diagnosis and may help to identify the particular canker strain.

Citrus canker outbreaks are prevented and managed in a number of ways. In countries that do not have canker, the disease is prevented from entering the country by quarantine measures. In countries with new outbreaks, eradication programs that are started soon after the disease has been discovered have been successful; such programs rely on destruction of affected groves. When eradication has been unsuccessful and the disease has become established, management options include replacing susceptible citrus cultivars with resistant cultivars, applying preventive sprays of copper-based bactericides, and destroying infected trees and all surrounding trees within an appropriate radius.

Citrus canker is thought to originate in the area of Southeast Asia-India. It is now also present in Japan, South and Central Africa, the Middle East, Bangladesh, the Pacific Islands, some countries in South America, and Florida. Some areas of the world have eradicated citrus canker and others have ongoing eradication programs, but the disease remains endemic in most areas where it has appeared. Because of its rapid spread, high potential for damage, and impact on export sales and domestic trade, citrus canker is a significant threat to all citrus-growing regions.

The citrus industry is the largest fresh-fruit exporting industry in Australia. Australia has had three outbreaks of citrus canker, all of which have been successfully eradicated. The disease was found twice during the 1900s in the Northern Territory and was eradicated each time. In 2004 an unexplained outbreak occurred in Central Queensland. The state and federal governments ordered that all commercial groves, all non-commercial citrus trees, and all native lime trees (C. glauca) in the vicinity of Emerald be destroyed rather than trying to isolate infected trees. Eradication was successful with permission to replant being granted to farmers by the biosecurity unit of the Queensland Department of Primary Industries in early 2009.

Citrus is an important domestic and export crop for Brazil. Citrus agriculture is the second most important agricultural activity in the Brazilian state of São Paulo, the largest sweet orange production area in the world.[2] There are over 100,000 groves in São Paulo, and the area planted with citrus is increasing. Of the ~2 million trees, greater than 80% of the trees are a single variety of orange, and the remainder is made up of tangerine and lemon trees. Because of the uniformity in citrus variety the state has been adversely affected by canker, causing crop and monetary losses. In Brazil rather than destroying entire groves to eradicate the disease, contaminated trees and trees within a 30 m radius are destroyed, up to 1998 over half a million trees had been destroyed.

Citrus canker was first found in the United States in 1910 not far from the Georgia – Florida border. Subsequently, canker was discovered in 1912 in Dade County, more than 400 miles (600 km) away. Beyond Florida, the disease was discovered in the Gulf States and reached as far north as South Carolina. It took more than 20 years to eradicate that outbreak of citrus canker, from 1914 through 1931, $2.5 million in state and private funds were spent to control it—a sum equivalent to $28 million in 2000 dollars.[3] In 26 counties, some 257,745 grove trees and 3,093,110 nursery trees were destroyed by burning. Citrus Canker was detected again on the Gulf Coast of Florida in 1986 and declared eradicated in 1994.

The most recent outbreak of citrus canker was discovered in Miami Dade County Florida on Sept. 28, 1995 , by Louis Willio Francillon, a Florida Department of Agriculture Agronomist . Despite eradication attempts, by late 2005 the disease had been detected in many places distant from the original discovery, for example, in Orange Park, FL, 315 miles (500 km) away. In January 2000, the Florida Department of Agriculture adopted a policy of removing all infected trees and all citrus trees within a 1900 ft radius of an infected tree in both residential areas and commercial groves. Previous to this eradication policy, the department eradicated all citrus trees within 125 ft of an infected one. The program ended in January 2006 following a statement from the USDA that eradication was infeasible. [4] [5]