The operations and infrastructure of Kuala Lumpur International Airport reflect its modern design.

The concept of KLIA's terminal building area was prepared by the late Japanese architect Kisho Kurokawa. The terminal building area was designed using the concept of Airport in the forest, forest in the airport, in which it is surrounded by green space. This was done with the co-operation of the Forest Research Institute of Malaysia. An entire section of rain forest was transplanted from the jungle and put in the satellite building.

The airport is designed to handle up to 100 million passengers per year. [1] It has colour coded signage in Malay, English, Chinese, Japanese and Arabic and an automated people mover and travelators to allow easy movement in the airport.

The runways and buildings cover an area of 100 square kilometres. With its 75 ramp stands, it is capable of handling 120 aircraft movements at a time. There are 216 check-in counters, arranged in six check-in aisles. The airport is the first in the world to use the Total Airport Management Systems (TAMS). 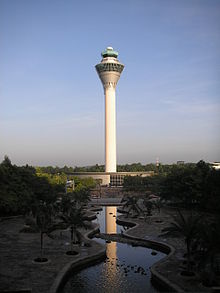 The 55 meter apron control tower is responsible for the provision of Air Traffic Service to aircraft and vehicles movement in the northern and southern parts of the Satellite Terminal building and the cargo apron areas.

KLIA has two parallel runways, 14L/32R and 14R/32L, both are over 4,000 metres (13,000 ft) long and 75 metres (246 ft) wide. The length of Runway 14R/32L is 4,056 metres (13,307 ft) while Runway 14L/32R is 4,124 metres (13,530 ft) long. Each runway also has 10 taxiways exit with the taxi time ranging from 2 minutes to 11 minutes. The two full-service runways can handle 120 movements per hour when one runway handles taking off and one runway handles landing. Each runway is also equipped with one completely parallel taxiway with a second parallel taxiway. Unlike airports in temperate countries which often have low visibility as low as 200 metres (660 ft) that requires higher Instrument Landing System category to guide landing of an aircraft, the airport has CAT II Precision Landing ILS to guide landing aircraft safely under all weather conditions with visibility as low as 350 metres (1,150 ft). The runways at KLIA are able to accommodate the Airbus A380. Future expansion of the KLIA Master Plan includes the addition of another two runways and one optional runway. [1] 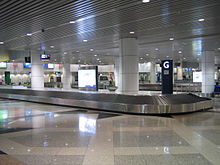 The BHS was built by Toyo Kanetsu and in 2006 a contract to extend the system from the satellite building to the ERL (Express Rail Link) platform in the Main Terminal Building was awarded to Siemens. The new system from Siemens will transport baggage between the two terminals at speeds of up to 36 km per hour, compared to the previous rate of 7.2 km per hour. The new system uses a high-speed tray conveyor system in which bags are placed on individual trays for better control and tracking at high speed compared to conventional belt conveyors enables the baggage to be checked-out in KL Sentral once the operator of KLIA Express, ERL Berhad introduce the new facility.[2].

IATA had agreed to facilitate the usage of RFID tags between KL International Airport and Hong Kong Airport after the launch of the world's smallest multiband RFID chip in Kuala Lumpur. KLIA will be the second airport to use RFID[3]

The RFID baggage tagging trial between Kuala Lumpur International Airport and Hong Kong International Airport is completed. Baggage tags are being issued at both Malaysia Airlines and Cathay Pacific check-in counters. The trial was delayed due to problems obtaining printers. Furthermore, KLIA is now awaiting reports from IATA which scheduled to be released first quarter of 2008.[4]

Some of the facilities of the baggage handling system [5]include:

Airport Fire and Rescue Services (AFRS) are provided to cope with aircraft accidents. There are two fire stations at the airport.

Both fire stations are equipped with fire and emergency rescue equipments. There are total of 7 Ultra Large Foam Tender, Ziegler 8-(8x8) vehicles costing RM 3.8 million each. [7]

The KLIA Advance Cargo Center covers 108 acres (0.4 km2) of land and can handle one million tonnes of cargo per annum, with the capability to expand to 3 million tonnes/year. The center is designed as an integrated transshipment hub within a Free Commercial Zone. Fueled by high economic growth in the South East Asian countries and China, the airport handled 672,888 tonnes of air cargo in 2006, a 5.9% growth over the 2005 fiscal year.

Applying new information technologies, the main operator of the center, MASKargo introduced various artificial intelligence systems to handle cargo such as KLIA Community System (KLIACS) and e-Invoicing and Payment. It pioneered the DagangNET System, allowing users to conduct trade declarations and applying permits over the internet and speeding the approval process by controlling authorities. These systems will be linked the Total Airport Management System.

In 2008, Kuala Lumpur International Airport was the 27th busiest airport by cargo traffic, based on Airports Council International statistics.

The animal hotel is operated by Malaysia Airlines's cargo arm, MASKargo. The hotel manages all imports, exports and stop-over transhipments that are related to animals, and offers a pets stay-in program where owners can leave their pets to in the hotel while they are away for vacations.

The airport's security comes under the purview of the Polis Bantuan Malaysia Airports Berhad or Malaysia Airports Berhad Auxiliary Police. They are trained at Malaysia Airport Training Centre (MATC), Penang. Since the September 11, 2001 attacks, airport security has been increased with more stringent checks at security checkpoints, and upgrading to more sophisticated x-ray equipment and surveillance systems. The auxiliary policemen in KLIA wear the same blue uniform and insignia as their counterparts in PDRM, which is a common practice among the auxiliary police corp in Malaysia. The only difference is that they wear a shoulder patch with the Malaysia Airports Berhad company logo with the wordings Polis Bantuan or Auxiliary Police embroidered under it. A security surcharge has been introduced to bear part of the cost. 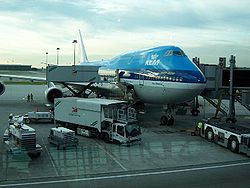 Ground Handling of an KLM Combi 747

There are four hangars housing facilities to provide aircraft maintenance provided by Malaysia Airlines and Kuala Lumpur Airport Service (KLAS). The airport also has a hangar which is purposely built for the Airbus A380, the first in South East Asia. The construction of the hangar was completed in 2007. [8]