Tone letters are letters that represent the tones of a language, most commonly in languages with contour tones. 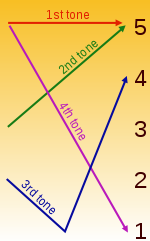 The tone contours of Standard Chinese. In the convention for Chinese, 1 is low and 5 is high. The corresponding tone letters are ˥ ˧˥ ˨˩˦ ˥˩.

A series of iconic tone letters based on a musical staff was invented by Yuen Ren Chao and adopted into the International Phonetic Alphabet.[1]

Combinations of these tone letters are schematics of the pitch contour of a tone, mapping the pitch in the letter space and ending in a vertical bar. For example, [ma˨˩˦] represents the mid-dipping pitch contour of the Chinese word for horse, 马 mǎ. Single tone letters differentiate up to five pitch levels: ˥ 'extra high' or 'top', ˦ 'high', ˧ 'mid', ˨ 'low', and ˩ 'extra low' or 'bottom'. With the possible exception of the Omotic languages of Ethiopia,[citation needed] no language is known to depend on more than five levels of pitch.

These letters are written at the end of a syllable.[2][3] For example, Standard Chinese has the following four tones in syllables spoken in isolation:

Diacritics may also be used to transcribe tone in the IPA. For example, tone 3 in Mandarin is a low tone between other syllables, and can be represented as such phonemically. The four Mandarin tones can therefore also be transcribed [má, mǎ, mà, mâ]. (Note that these are not the convention of Pinyin, and so in this case IPA diacritics may be confusing.)

Tone letters are often transliterated into numerals, particularly in Asian and Mesoamerican tone languages. Until the spread of OpenType computer fonts starting in 2000–2001, tone letters were not practical for many applications. A numerical substitute has been commonly used for tone contours, with a numerical value assigned to the beginning, end, and sometimes middle of the contour. For example, the four Mandarin tones are commonly transcribed as "ma55", "ma35", "ma214", "ma51".[4]

However, such numerical systems are ambiguous. In Asian languages such as Chinese, convention assigns the lowest pitch a 1 and the highest a 5, corresponding to fundamental frequency (f0). Conversely, in Africa the lowest tone is assigned a 5 and the highest a 1. In the case of Mesoamerican languages, the highest tone is tone is 1 but the lowest depends on the number of contrastive pitch levels in the language being transcribed. For example, a Mixtecan language with three level tones will denote them as 1 (high /˥/), 2 (mid /˧/) and 3 (low /˩/). A reader accustomed to Chinese usage will misinterpret the Mixtec low tone as mid, and the high tone as low. Because tone letters are iconic, and musical staves are internationally recognized with high tone at the top and low tone at the bottom, tone letters do not suffer from this ambiguity.

The International Phonetic Association suggests using the tone letters to represent phonemic contrasts. For example, if a language has a single falling tone, then it should be transcribed as /˥˩/, even if this tone does not fall across the entire pitch range.[5]

For the purposes of a precise linguistic analysis there are at least three approaches: linear, exponential, and language-specific. A linear approach is to map the tone levels directly to fundamental frequency (f0), by subtracting the tone with lowest f0 from the tone with highest f0, and dividing this space into four equal f0 intervals. Tone letters are then chosen based on the f0 tone contours over this region.[6][7] This linear approach is systematic, but it does not always align the beginning and end of each tone with the proposed tone levels.[8] Chao's earlier description of the tone levels is an exponential approach. Chao proposed five tone levels, where each level is spaced two semitones apart.[2] A later description provides only one semitone between levels 1 and 2, and three semitones between levels 2 and 3.[3] This updated description may be a language-specific division of the tone space.[9]

In Unicode, the IPA tone letters are encoded as follows:[10]

These are combined in sequence for contour tones. Unicode includes other tone letters, such as UPA and extended tone marks for bopomofo (see).

Although the phrase "tone letter" generally refers to the Chao system, there are also orthographies with letters assigned to individual tones, and these may also be called tone letters.

In several systems, tone numbers are integrated into the orthography, so that they are technically letters even though they continue to be called "numbers". However, in the case of Zhuang, the 1957 Chinese orthography modified the digits to make them graphically distinct from digits used numerically; two letters were adopted from the Cyrillic alphabet: ⟨з⟩ and ⟨ч⟩, replacing the similar-looking tone numbers ⟨3⟩ and ⟨4⟩. In 1982 these were replaced with Latin letters, one of which, ⟨h⟩, now pulls double-duty as a consonant letter for /h/ and as a tone letter for mid tone.

The Hmong Romanized Popular Alphabet was devised in the early 1950s with Latin tone letters. Two of the 'tones' are more accurately called register, as tone is not their distinguishing feature. Several of the letters pull double duty representing consonants.

(The low-rising creaky register is a phrase-final allophone of the low-falling register.)

And a unified Miao alphabet used in China applies a different scheme:

The Uralic Phonetic Alphabet has marks resembling half brackets that indicate the beginning and end of high and low tone: mid tone ˹high tone˺ ˻low tone˼.