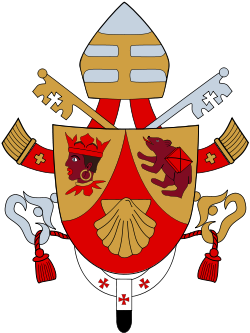 The coat of arms of Pope Benedict XVI 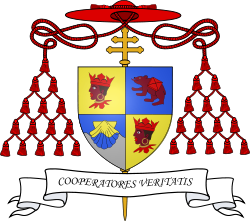 The coat of arms of Cardinal Ratzinger

The coat of arms of Pope Benedict XVI was designed by then Archbishop Andrea Cordero Lanza di Montezemolo (who later was created a Cardinal) soon after the papal election. The coat of arms consists of a shield and external ornaments.

The shape of the shield varies from artist to artist. In the official rendering of the coat of arms of Pope Benedict XVI the shape chosen is that of a chalice. In heraldry, the herald and the person granted arms also have considerable leeway in the contents of the shield. By long-standing tradition this was the only place within the papal coat of arms that changed from pope to pope.

The blazon (the written description, in terminology peculiar to heraldry, of the contents of the coat of arms) given on the Vatican website is as follows:

Gules, chape ployé Or, with the scallop shell Or; the dexter chape with a moor's head Proper, crowned and collared Gules, the sinister chape a bear trippant Proper, carrying a pack Gules belted Sable.'

This means, in non-technical English:

Note 1. A mantle outside the shield does not normally contain charges (an heraldic term for objects). Within the shield, as here, it is a religious symbol, and indicates ideals inspired in monastic spirituality. It is also a reference to the Order of Saint Benedict.

Note 2. The black bands tying the red pack is one of several existing contraventions of the heraldic rule of tincture, which in general does not allow the placing of colour on colour or metal (gold or silver) on another metal.

There are often alternative ways to blazon a given set of arms, another description could be:

Per chevron ployé throughout Or and Gules, dexter a Moor's head proper, crowned and collared Gules, and sinister a bear passant in bend proper carrying a pack Gules belted Sable, in base an escallop Or.

This is equivalent to:

A shield divided by curved lines draping from the upper center of the shield to either side. The upper sections are gold (yellow) and the base is red. In the shield's upper right (as observed by the person carrying the shield) is a Moor's head in natural color wearing a crown and collar (the head is also called a "Moor of Freising" or "caput ethiopicum"). In the upper left is a walking brown bear in natural color bearing a red pack fastened with black belts (the bear is also known as "Corbinian's bear"). In the base is a gold scallop shell.

The charges of the arms — the Moor's head, Corbinian's bear, and scallop — appeared on the Pope's previous coat of arms, used when he was Archbishop of Munich and Freising. However, they not only relate to his origins, but also to his trust in God, to which Christians are called so as to endure the world's travails and hardships, as well the Pope's calling to spread this faith to others.

The symbolism of the scallop shell is multiple. Saint Augustine was once walking along the seashore, meditating on the unfathomable mystery of the Holy Trinity. A boy was using a shell to pour seawater into a little hole. When Augustine asked him what he was doing, he replied, "I am emptying the sea into this hole." Thus did Augustine understand that man would never penetrate to the depths of the mystery of God. While a doctoral candidate in 1953, Fr. Joseph Ratzinger wrote his dissertation on The People of God and the House of God in Augustine's Teaching is always about the Church, and therefore has a personal connection with the thought of this great Doctor of the Church.

The foundational meaning behind the scallop shell is its allusion to the Sacrament of Holy Baptism. In the Roman Catholic Church, a sea shell is often used to pour water over the head of the child being baptized. Thus, a sea shell is used to evoke the imagery of this rite which makes one a part of the Body of Christ and is foundational to the Christian life.

The shell also stands for pilgrimage. When topped with a scallop shell a pilgrim's staff, or "Jacob's staff," is the sign of a pilgrim. In Church art it is a symbol of the apostle Saint James the Great, and his sanctuary at Santiago de Compostela in Spain, perhaps the principal place of pilgrimage during the Middle Ages. This symbol alludes, as well, to "the pilgrim people of God," a title for the Church which Joseph Ratzinger championed at the Second Vatican Council as peritus (theological adviser) to Cardinals Josef Frings of Cologne and Julius Döpfner of Munich-Freising (his episcopal predecessor). When he became Archbishop he took the shell in his coat of arms. It is also found in the insignia of the Schottenkloster in Regensburg, where the major seminary of that diocese is located, a place where Benedict taught as a professor of theology.

Finally, the pilgrimage symbolism of the shell may also refer both to the reconfigured role of the pope as not only ruler, but also pilgrim among the peoples and nations of the world. Pope Paul VI—who created Joseph Ratzinger as a cardinal in 1977—was often called the "Pilgrim Pope" for his ground-breaking travels to the Holy Land, India, the United States, Colombia, the Philippines, and elsewhere. This precedent was greatly elaborated upon by Pope John Paul II with his historic trips, numbering over a hundred. As a result, Benedict may be paying homage to these men and the new role for the papacy, which he himself must now continue and make his own.

The Moor's head is an heraldic charge associated with Freising, Germany. The origins of the Moor's head in Freising is not entirely known. Typically facing to the viewer's left (dexter in heraldic terms) and depicted in natural colour [caput Aethiopum] (brown) with red lips, crown and collar. This is the ancient emblem of the Diocese of Freising, founded in the 8th century, which became a Metropolitan Archdiocese with the name of München und Freising in 1818, subsequent to the Concordat between Pius VII and King Maximilian Joseph of Bavaria (5 June 1817).

The Moor's head is not rare in European heraldry. It still appears today in the arms of Sardinia and Corsica, as well as in the blazons of various noble families. Italian heraldry, however, usually depicts the Moor wearing a white band around his head instead of a crown, indicating a slave who has been freed; whereas in German heraldry the Moor is shown wearing a crown. The Moor's head is common in the Bavarian tradition and is known as the caput Ethiopicum or the Moor of Freising.[1]

A legend states that while traveling to Rome, Saint Corbinian's pack horse was killed by a bear. He commanded the bear to carry the load. Once he arrived, he released it from his service, and it returned to Bavaria. The implication is that "Christianity tamed and domesticated the ferocity of paganism and thus laid the foundations for a great civilization in the Duchy of Bavaria."[2] At the same time, Corbinian's bear, as God's beast of burden, symbolizes the weight of office that Benedict now carries. 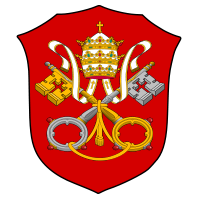 The coat of arms of the Holy See.

Traditionally, a pope's coat of arms was externally adorned only by the three-tiered papal tiara with lappets and the crossed keys of Saint Peter with a cord. No other objects nor a motto was added. The tiara represented the roles of authority of the pope, while the keys represent the power to loose and bind on heaven and earth (Matt 16:19). Pope Benedict's arms maintain the keys, but replace the tiara with a mitre and add a pallium. However, the tiara and keys remain the symbol of the papacy, and appear on the coat of arms of the Holy See and (reversed) on the flag of Vatican City.

In Pope Benedict's arms, the tiara is replaced with a silver mitre with three gold stripes. These stripes recall the three crowns of the tiara, which came to represent the three powers of Orders, Jurisdiction and Magisterium. The stripes preserve that meaning and are joined at the centre to show their unity in the same person.

The pallium with red crosses is also a new addition. It represents a bishop's role of being pastor of the flock entrusted to him by Christ. The form of the pallium included in the coat of arms recalls that used by metropolitan archbishops (but with black crosses) rather than the much larger pallium worn by Pope Benedict at his inauguration. 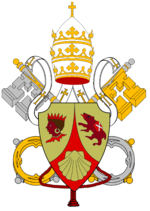 Private representation of the coat of arms of Pope Benedict XVI with the papal tiara and without the pallium. Additionally, on the shield or (gold) has been replaced by vert (green) and the keys have been arranged as for Vatican City, not for a pope.

Heraldry is governed by established custom or authoritative decrees. Artists have considerable latitude on how to render elements of arms, as long as heraldic customs and authoritative decrees are followed. Some have voiced objection to Pope Benedict's use of the mitre and pallium and the abandonment of the tiara. Their arguments include: 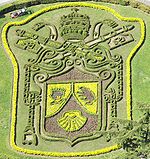 The coat of arms of Benedict XVI in the garden behind Saint Peter's Basilica.

On these grounds, some claim that Benedict's arms can still properly be rendered with the tiara and keys and without the pallium, and indeed there have been a few instances where the Pope's new shield has been coupled with the traditional tiara and keys. The most public was in the Vatican gardens behind St. Peter's Basilica, viewable from atop the dome. Shortly after the death of John Paul II, the contents of his shield were removed from the flowerbed, but the tiara was left in place. After the election of Benedict XVI, the gardeners put the design of the new Pope's arms within the shield, but rather than immediately digging up the tiara and replacing it with a mitre, they left it in place. They also did not add the pallium, which would have called for a complete redesign.