Coat of arms of Boston College

Coat of arms of Boston College 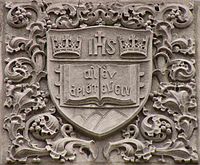 An early depiction of the Boston College coat of arms on the east façade of Bapst Library, showing the Jesuit monogram in the shield which was later replaced by the Jesuit badge 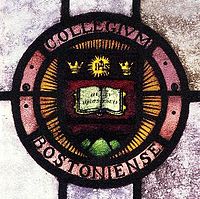 The Boston College coat-of-arms incorporates the heraldic symbols of knowledge; Boston, Massachusetts; Boston, Lincolnshire; and the Jesuit Order. According to a pamphlet published by Sub Turri, the coat of arms is blazoned as follows:

The tinctures, gules and or, are the heraldic equivalents of the Boston College colors, maroon and old gold. The "trimount," represents the city of Boston's early topographical distinction of three hills (Mount Vernon, Beacon Hill, and Pemberton Hill) and its former name, Tremontaine or Tremont. The open book is symbolic of knowledge and is the central charge of the academic shield. The chief is derived from the coat of arms of the town of Boston, Lincolnshire, in England (Saint Botolph's Town) after which the New England city is named, which features a field sable, three crowns, of crosses patté and fleur-de-lis, per pale or. Only two crowns are shown, the place of the third being taken by the badge of the Jesuit order. This badge has a field, azure, rayonne or, enclosing the letters IHS, a Christogram based on the first three letters of "Jesus" in Greek (Ίησους, Latinized IHSOVS), under a cross and above three nails, of the second.

Early Boston College insignia consisted primarily of various depictions of the Jesuit badge. While its origins are undetermined, the coat of arms dates at least to the presidency of Robert Fulton, SJ (1870 – 1880). A mosaic depiction of the arms from the original Boston College faculty residence on James Street in Boston's South End was executed during his presidency and is now on view in Fulton Hall. Charles Donagh Maginnis, who became the chief architect of the university in 1908, has been credited for codifying its blazon. Later revisions included the substitution of the Jesuit monogram with the Jesuit badge, the rearrangement of the trimount and the addition of a scroll bearing the Latin device Religioni et Bonis Artibus. The Boston College campus features various depictions of the coat of arms in facade engravings, wood carvings, and stained glass. A stylized modernist depiction in cast concrete is part of the west facade of Carney Hall, built in the 1960s.

While Article VI of the Bylaws of the Trustees of Boston College states only that "the seal of the University shall consist of a flat circular die with wording as follows: Collegium Bostoniense, Religioni et Bonis Artibus, αἰέν ἀριστεὺειν."[2], the Boston College coat of arms figures prominently in current versions of the university seal. [3] The seal encircles the coat of arms with a band in maroon edged with gold with the inscription Collegium Bostoniense and Fund. MDCCCLXIII in gold block lettering.