One for My Baby (and One More for the Road)

One for My Baby (and One More for the Road)

"One for My Baby (and One More for the Road)" is a popular song written by Harold Arlen and Johnny Mercer for the musical The Sky's the Limit (1943) and first performed in the film by Fred Astaire. It was popularized by the American singer Frank Sinatra. "One for My Baby" is the theme song of the 1957-1958 NBC detective series, Meet McGraw, starring Frank Lovejoy.[1] 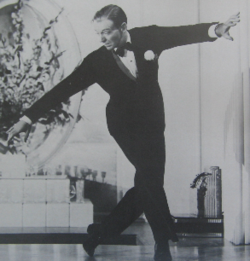 Fred Astaire dancing on a bar counter in "One for My Baby" from The Sky's the Limit (RKO Radio Pictures, 1943)

Harold Arlen described the song as "another typical Arlen tapeworm" - a "tapeworm" being the trade slang for any song which went over the conventional 32 bar length[citation needed]. He called it "a wandering song. [Lyricist] Johnny [Mercer] took it and wrote it exactly the way it fell. Not only is it long - forty-eight bars - but it also changes key. Johnny made it work."[2] In the opinion of Arlen's biographer, Edward Jablonski, the song is "musically inevitable, rhythmically insistent, and in that mood of 'metropolitan melancholic beauty' that writer John O'Hara finds in all of Arlen's music."[2]

Sinatra recorded the song several times during his career: In 1947 with Columbia Records, in 1954 for the soundtrack to the film Young At Heart, in 1958 for Frank Sinatra Sings for Only the Lonely, in 1962 for Sinatra & Sextet: Live in Paris, in 1966 for Sinatra at the Sands and finally, in 1993, for his Duets album.

Countless renditions of "One For My Baby..." have been performed. The following is a list of notable/well-known versions which have been recorded thus far:

In film and television