Otello is an opera in three acts by Gioachino Rossini to an Italian libretto by Francesco Maria Berio di Salsi, based on Shakespeare's play Othello.

However, the opera deviates heavily from Shakespeare's original, not only in that it takes place in Venice and not on Cyprus, but also in that the whole dramatic conflict develops in a different manner. The role of Iago is reduced to some degree, and it is much less diabolical than in the original or in Verdi's Otello of 1887.

Rossini's Otello is an important milestone in the development of opera as musical drama. It provided Giuseppe Verdi with a benchmark for his own adaptations of Shakespeare. A recent Opera Rara CD of the opera includes an alternative happy ending, a common practice with drama and opera at that period of the 19th Century.

The first performance took place at the Teatro del Fondo in Naples on 4 December 1816. It was given its UK premiere on 16 May 1822 at the King's Theatre in London and its American premiere at the Park Theatre in New York on 7 February 1826.[1] 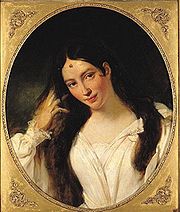 Franz Liszt based the Canzone from the Années de Pèlerinage supplement Venezia e Napoli on the gondolier's song "Nessun Maggior Dolore" from this opera.