Creative Technology Ltd. (SGX: C76, OTC Markets Group: CREAF) is a Singapore-based global company headquartered in Jurong East, Singapore. The principal activities of the company and its subsidiaries consist of the design, manufacture and distribution of digitized sound and video boards, computers and related multimedia, and personal digital entertainment products.

The firm began as a computer repair shop, where Sim developed an add-on memory board for the Apple II computer. Later, they started creating customized PCs adapted in Chinese. A part of this design included enhanced audio capabilities, so that the device could produce speech and melodies. The success of this audio interface led to the development of a standalone sound card.

In 1987, they released a 12-voice sound generator sound card for the IBM PC architecture, the Creative Music System(C/MS), featuring two Philips SAA 1099 chips. Sim personally went from Singapore to Silicon Valley and managed to get RadioShack's Tandy division to market the product.[4] The card was, however, unsuccessful and lost to AdLib. Learning from this, Creative produced the first Sound Blaster, which included the prior CM/S hardware but also incorporated the Yamaha YM3812 chip (also known as OPL2) that was found on the AdLib card, as well as adding a component for playing and recording digital samples. The firm used aggressive marketing strategies, from calling the card a "stereo" component (only the C/MS chips were capable of stereo) to calling the sound producing micro-controller a "DSP" (for "digital sound processor"), hoping to associate the product with a digital signal processor (the DSP could encode/decode ADPCM realtime, but otherwise had no other DSP-like qualities).

The firm's Sound Blaster sound card was among the first dedicated audio processing cards to be made widely available to the general consumer. The card soon became a de facto standard for sound cards in PCs for many years, mostly by the fact that it was the first to bundle what is now considered to be a part of a sound card system: digital audio, on-board music synthesizer, MIDI interface and a joystick port. This continued until the 2000s when OEM PCs began to be built with sound boards integrated directly onto the motherboard, and the Sound Blaster found itself reduced to a niche product.

Monaural Sound Blaster cards were introduced in 1989, and stereo cards followed in 1992 (Sound Blaster Pro). Wavetable MIDI was added with the 16-bit Sound Blaster AWE32 and AWE64 with 32 and 64 voices. In 1998, Sound Blaster Live! was the company's first PCI-based sound card. Over the years, the Sound Blaster line has been enhanced to provide 3D audio and home theater quality sound directly from a PC.

Creative dominated the PC audio market and remains unchallenged by a major competitor since the late 1990s which saw a legal tussle between Creative and Aureal Semiconductor.[5] A series of lawsuits was filed by Aureal in 1998 which alleges infringements over various technology patents such as PCI audio and 2D/3D positional sound APIs. Creative responded by counter suing with a series of lawsuits for false advertising and various other claims. Aureal won the case but went bankrupt as a result of legal costs, so its assets were acquired by Creative in September 2000 for US$32 million.

In the mid 1990s, Creative's venture into the CD-ROM market proved to be unsuccessful. The firm was forced to write off nearly US$100 million in inventory when the market collapsed due to a flood of cheaper alternatives.[6]

In April 1999, Creative launched the NOMAD line of digital audio players that would later introduce the MuVo and ZEN series of portable media players. Creative remains a serious competitor in the portable audio player market, a market which they dominated until the entry of Apple Computer with the iPod. In November 2004, Creative Labs announced a $100 million marketing campaign to promote their digital audio products, including the ZEN range of MP3 players.[7]

The firm applied for U.S. Patent 6,928,433 on January 5, 2001 and was awarded the patent on August 9, 2005.[8] The ZEN Patent was awarded to the firm for the invention of user interface for portable media players. This opened the way for potential legal action against Apple's iPod and the other competing players. The firm took legal actions against Apple in May 2006. In August, 2006, Creative and Apple entered into a broad settlement,[9] with Apple paying Creative $100 million for the license to use the Zen patent. Creative then joined the "Made for iPod" program.

On March 22, 2005, The Inquirer reported that Creative Labs had agreed to settle in a class action lawsuit about the way its Audigy and Extigy soundcards were marketed. The firm offered customers who purchased the cards up to a $62.50 reduction on the cost of their next purchase of its products, while the lawyers involved in filing the dispute against Creative receive payment of approximately $470,000.[10]

In 2007, Creative voluntarily delisted itself from NASDAQ, where it had the symbol of CREAF.[11] Its stocks are now solely on the Singapore Exchange (SGX-ST). In early 2008, Creative Labs' technical support center, located in Stillwater, Oklahoma, laid off several technical support staff, furthering ongoing concerns surrounding Creative's financial situation.

In January 2009, the firm generated internet buzz with a mysterious website promising a "stem cell-like" processor which would give a 100-fold increase in supercomputing power over current technology, as well as advances in consumer 3D graphics.[12] At CES 2009, it was revealed to be the ZMS-05 processor from ZiiLABS, a subsidiary formed from the combining of 3DLabs and Creative's Personal Digital Entertainment division.[13] 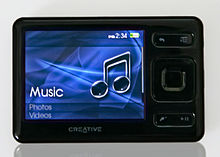 The Creative ZEN was released in 2007.

The Creative ZEN name is used in a range of handheld media devices by the company. They are the successor to the NOMAD line of players. The line has won several awards, including three CES Best of Show awards, in 2004 with the Creative ZEN Portable Media Center,[15] 2005 with the ZEN MicroPhoto,[16] and 2006 with the ZEN Vision:M.[17] The company uses MuVo branding for its smaller, flash-based devices.

While already a vendor of webcams for PCs and laptops, in May 2008, Creative announced the unveiling of its Vado video camera.[18] The Vado video camera is a handheld device designed for portability, as a direct competitor istothe Flip Video. In December 2008,[19] the firm announced a HD version of the Vado, the Vado HD. This camera was among the first portable high-definition cameras. The Vado HD received an 89 rating from PCWorld,[20] 4/5 stars and an Editors Choice award from PC Magazine,[21] and generally favorable reviews from users on Amazon.[22]

Creative MediaSource is software included with certain of the firm's products, such as Sound Blaster, MuVo, and Creative Zen. It is mainly used as a method to sync and transfer digital media.