The Eastern Newt or Red-spotted Newt (Notophthalmus viridescens) is a common salamander of eastern North America. Eastern newts dwell in wet forests with small lakes or ponds. They can coexist in an aquatic environment with fish, however, their skin secretes a poisonous substance when the newt is threatened or injured. They have a lifespan of 12 to 15 years in the wild, and may grow to 5 inches in length. The newts are a common aquarium pet, being either collected from the wild or purchased. The strikingly colored (orange) juvenile stage, which is land-dwelling, is known as the "red eft". 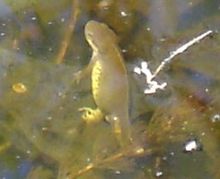 Eastern Newts have three stages of life: the aquatic larva or tadpole, the red eft or terrestrial juvenile stage, and the aquatic adult. The larva possesses gills and does not leave the pond environment where it was hatched. Larvae are brown-green in color, and shed their gills when they transform into the terrestrial red eft. The red eft is bright orangish-red in color, with darker red spots outlined in black. An Eastern Newt can have as many as 21 of these spots. The pattern of these spots differs among the subspecies. During this stage, the eft may travel far, acting as a dispersal stage from one pond to another, ensuring outcrossing in the population. After two or three years, the eft finds a pond and transforms into the aquatic adult. The adult's skin is olive green, but retains the eft's characteristic outlined red spots. It has a larger and wider tail and characteristically slimy skin.

The Peninsula Newt (N. v. piaropicola) typically skips the red eft stage and metamorphoses directly into an aquatic adult. It is also common for this subspecies to be neotenic, with a larva transforming directly into a sexually-mature adult while retaining its external gills.

Eastern Newts home using magnetic orientation. Their magnetoreception system seems to be a hybrid of polarity-based inclination and a sun-dependant compass. Shoreward-bound Eastern Newts will orient themselves quite differently under light with wavelengths of ~400 nm than light with wavelengths of ~600 nm, while homing newts will orient themselves the same way under both short and long wavelengths.[1] It is considered very likely that ferromagnetic material, probably biogenic magnetite, is present in the Eastern Newt's body.[2]

Eastern Newts are at home in both coniferous and deciduous forests. They need a moist environment with either a temporary or permanent body of water, and thrive best in a muddy environment. During the eft stage, they may travel far from their original location. Red efts may often be seen in a forest after a rainstorm. Adults prefer a muddy aquatic habitat, but will move to land during a dry spell. Eastern Newts have some amount of toxins in their skin, which is brightly colored to act as a warning. Even then, only 2% of larvae make it to the eft stage. Some larvae have been found in the pitchers of the carnivorous plant Sarracenia purpurea.[3]

Eastern newts eat a variety of foods such as insects, small mollusks and crustaceans, young amphibians, and frog eggs. They also eat worms.

A small group (1–3) of adult Eastern Newts can be maintained in a 10-gallon aquarium partially filled with dechlorinated water and equipped with an air-operated filter. While oxygenation isn't necessary for the newts to breathe, it allows the bacteria that decomposes their waste to flourish. This prevents dangerous buildups of ammonia and other anaerobically produced chemicals. The aquarium should be topped with a screen lid to prevent the newts from escaping and to provide proper ventilation. The newts will require an area to haul out of the water from time to time; this can be provided with a piece of driftwood, a "turtle dock" sold by pet stores, an "island" (a patch of soil or gravel with sphagnum moss and liverwort), or with terra cotta pots filled with aquarium gravel. If desired, pothos, java fern, java moss, or other semi-aquatic plants can be placed in the pot to help absorb nitrogenous waste produced by the newts. Hiding places for the newts should be provided in the form of aquarium plants and/or clay pots on the bottom of the aquarium. Water temperatures in the aquarium should stay between 60 °F (16 °C) and 70 °F (21 °C) during the simulated summer. Should you choose to simulate a winter to induce breeding or simply to recreate wild conditions more accurately, water temperature should approach but not drop below 40 °F (4 °C). 10-20% of the water in the newt aquarium should be replaced every week. The newts should be fed bloodworms, earthworms, redworms, daphnia, mosquito larva (collected from non-polluted sources), brine shrimp and commercial amphibian diets such as Reptomin (although some may refuse these prepared foods). Feeding some type of live food is necessary, even if the newt happily accepts dry or prepared foods. Any uneaten food should be netted out to avoid fouling the water.