Lake of the Ozarks

Lake of the Ozarks

The Lake of the Ozarks is a large reservoir created by impounding the Osage River in the northern part of the Ozarks in central Missouri. Extents of three smaller tributaries to the Osage, the Niangua River, Grandglaize Creek, and Gravois Creek, are included in the impoundment. The lake has a surface area of 55,000 acres (223 km²), over 1,150 miles (1,850 km) of shoreline, and the main channel of the Osage Arm stretches 92 miles (148 km) from end to end. The total drainage area is over 14,000 square miles (36,000 km2). The lake's serpentine shape has earned it the nickname "The Magic Dragon," which has in turn inspired the names of local institutions such as The Magic Dragon Street Meet. [3]

A hydro-electric power plant on the Osage River was first pursued by Kansas City developer Ralph Street in 1912. Street put together the initial funding and began building roads, railroads and infrastructure necessary to begin construction of the dam, with a plan to impound a much smaller lake. In the mid-1920s, Street’s funding dried up and he abandoned the effort.[4]

The lake was created by the construction of the 2,543-foot (775 m) long Bagnell Dam by Union Electric Company of St. Louis, Missouri. The principal engineering firm was Stone and Webster. Construction began August 6, 1929, and was completed in April 1931. The dam is operated and maintained by AmerenUE, the successor of Union Electric, under the authority of a permit issued by the Federal Energy Regulatory Commission. The Lake of the Ozarks measures more than 90 miles (140 km) in length and has several tributaries supplying it. In total, it has over 1,100 miles (1,800 km) of shoreline in four different Missouri counties. The massive body of water backed up behind Bagnell Dam is the largest manmade lake in the Midwestern United States.

During construction the lake was referred to as Osage Reservoir or Lake Osage. The Missouri General Assembly officially named it Lake Benton after the former Senator Thomas Hart Benton. None of the names took as it was popularly referred to by its location in the Ozarks. The electric generating station, however, is still referred to by the utility company as the "Osage Hydroelectric Plant."[5]

At the time of construction it was one of the largest man-made lakes in the world and the largest in the United States. Though built to provide hydroelectric power for customers of Union Electric, the lake quickly became a significant tourist destination for the Midwest. There are over 70,000 homes existing along the lake, many of which are vacation homes. Spectacular scenery characteristic of the Ozarks has also helped to transform the lake into a major resort area. More than 3 million people visit the lake annually.

The Lake of the Ozarks is unique in the fact that it is the largest man-made, non-flood control lake in the United States. The lake rarely varies in surface elevation by more than 5 feet (2 m), with normal pool elevation of 660.0 feet (201.2 m) above mean sea level. Unlike many flood-control lakes constructed by the Corps of Engineers, most of the shoreline on the Lake of the Ozarks is privately owned, and the relatively stable surface elevation has created ideal conditions for private development within a few feet of the shoreline.

The Lodge of Four Seasons(Championship Course). Classic Robert Trent Jones design occupies raised fingers of land that jut into the lake. Signature par-three 13th calls for a long carry over a cove to reach the green. One of the Midwest's prettiest, most challenging courses.[6] 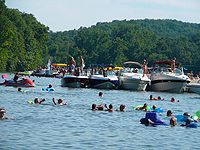 During the process of land acquisition for the lake during the 1920s, 17,500 acres (71 km2) of land along the Grand Glaize Arm of the lake was set aside for a national park. In 1946, this land was acquired by the State of Missouri for Lake of the Ozarks State Park, the largest State Park in Missouri.

Lake of the Ozarks State Park is home to Party Cove, a rowdy gathering spot that a travel writer for The New York Times called the "oldest established permanent floating bacchanal in the country."[8] The Missouri State Water Patrol has estimated that the cove attracts up to 3000 boats during the Fourth of July weekend.[8]

Here is a list of historic bridges that were on the lake.

The Federal Energy Regulatory Commission (FERC), in the process of renewing the lease for the power plant operated by Ameron, determined that numerous homes and structures were encroaching on utility land in violation of federal regulations. This issue "has triggered panic in the area's lakefront communities and led to a growing battle among regulators, a utility company, land attorneys and the state's congressional delegation." [9]

Media related to Lake of the Ozarks at Wikimedia Commons