Rowley grew up in New Hampton, Iowa and graduated valedictorian of her high school class in 1973. Her father was a letter carrier for 31 years. She attended Wartburg College in Waverly, Iowa, graduating in 1977 with a degree in French. In 1980, she received her Juris Doctor from the University of Iowa College of Law and passed the Iowa Bar Exam. She is married and has four children.[citation needed]

Shortly after she became a Special Agent with the FBI, Rowley was assigned to the Omaha, Nebraska and Jackson, Mississippi Divisions. Beginning in 1984, she spent six years working in the New York Office on investigations involving organized crime. She also served in the U.S. embassy in Paris, and the consulate in Montreal. In 1990, she was assigned to the FBI's Minneapolis office where she became the chief legal adviser to the office.[citation needed]

After the September 11, 2001, attacks, Rowley wrote a paper for FBI Director Robert Mueller documenting how FBI HQ personnel in Washington, D.C., had mishandled and failed to take action on information provided by the Minneapolis, Minnesota Field Office regarding its investigation of suspected terrorist Zacarias Moussaoui. This individual had been suspected of being involved in preparations for a suicide-hijacking similar to the December 1994 "Eiffel Tower" hijacking of Air France 8969. Failures identified by Rowley may have left the U.S. vulnerable to the September 11, 2001, attacks. Rowley was one of many agents frustrated by the events that led up to the attacks, writing:

During the early aftermath of September 11th, when I happened to be recounting the pre–September 11th events concerning the Moussaoui investigation to other FBI personnel in other divisions or in FBIHQ, almost everyone's first question was "Why?--Why would an FBI agent(s) deliberately sabotage a case? (I know I shouldn't be flippant about this, but jokes were actually made that the key FBI HQ personnel had to be spies or moles, like (Robert Hanssen), who were actually working for Osama Bin Laden to have so undercut Minneapolis' effort.) [2][3]

Rowley testified in front of the Senate and for the 9/11 Commission about the FBI's internal organization and mishandling of information related to the September 11, 2001, attacks. Mueller and Senator Chuck Grassley (R-IA) pushed for and got a major reorganization, focused on creation of the new Office of Intelligence at the FBI. This reorganization was supported with a significant expansion of FBI personnel with counterterrorism and language skills.[citation needed]

Rowley retired from the FBI in 2004 after 24 years with the agency. She jointly held the TIME "Person of the Year" award in 2002 with two other women credited as whistleblowers: Sherron Watkins from Enron and Cynthia Cooper of WorldCom. She also received the Sam Adams Award for 2002.[citation needed] 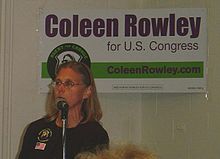 Coleen Rowley at her rally in Rosemount, Minnesota on September 17, 2006

US Rep. John Murtha (D-PA) endorsing Rowley at a rally in Rosemount, Minnesota on September 17, 2006

Protestors at her rally in Rosemount, Minnesota on September 17, 2006

In May 2005, Rowley announced that she was considering running against incumbent Representative John Kline for Minnesota's 2nd District seat in the United States House of Representatives in 2006. At the time of her announcement, she had been living in Apple Valley, Minnesota for 15 years. Previously she had voted and identified as a Republican, but on June 27, 2005, Rowley announced that she was entering the race as a DFLer, and officially kicked off her campaign at her home on July 6.[citation needed]

On August 18, 2005 she attended a vigil in Crawford, Texas outside President George W. Bush's ranch requesting that the president meet with Cindy Sheehan to answer Sheehan's questions regarding the War in Iraq and the death of Sheehan's son, Casey.[citation needed]

On January 3, 2006, an unauthorized professionally retouched image appeared on the Rowley campaign website. This image depicted Kline, a retired Colonel of the Marine Corps, as Colonel Klink from Hogan's Heroes. Kline objected to the photo. The campaign removed the image the same day and initiated an investigation. Rowley apologized quickly.[4] The Kline campaign also accused a Rowley supporter, David Bailey, of attempting to make a cash contribution to Kline’s campaign. A cash contribution is not legal and Kline subsequently asserted that this constituted an effort to undermine his campaign apparatus.[citation needed]

Representative John Murtha (D-PA) endorsed Rowley. He visited the district during the campaign and held a rally for Rowley at the local VFW in Rosemount, while veterans protested against them outside. The Rowley campaign subsequently focused efforts on veterans' groups and others with experience that relates directly to the war in Iraq. Obtaining financing for her campaign proved difficult. Opposing an incumbent conservative such as Kline in a conservative district did not attract money from the most robust of Democratic resources such as the DNC.[5]

Kline's campaign achieved a 2-1 advantage in raising funds,[6] and he retained his seat.