The Christen Eagle II, which later became the Aviat Eagle II in the mid 1990s, is an aerobatic sporting biplane aircraft that has been produced in the United States since the late 1970s. Designed to compete with the Pitts Special, it is marketed in kit form for homebuilding. The Eagle II is a small aircraft of conventional configuration with single-bay, equal-span staggered biplane wings braced with an I-strut. The pilot and a single passenger sit in tandem underneath a large bubble canopy. The tailwheel undercarriage is fixed, with the mainwheels housed in streamlined fairings. The fuselage and tail are constructed of steel tube, with the forward fuselage skinned in metal and the rear fuselage and tail in fabric. The wing structure is wooden and fabric covered. By 1985, over 600 kits had been sold, and over 250 aircraft were known to have been completed. 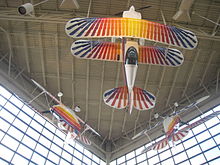 In 1979, the Eagles Aerobatic Team (Charlie Hillard, Tom Poberezny, and Gene Soucy) chose the Christen Eagle as a replacement for their Pits Special airshow act "The Red Devils". The act continued until 1995. All three Christen Eagles hang from the lobby of the EAA Airventure Museum in Oshkosh, Wisconsin.[1]

On June 18, 2011 the Christen Eagle (reg. N54CE) crashed into the Vistula river during Płock Airshow, killing pilot Marek Szufa onboard.[2]