:"for the former municipality, see " 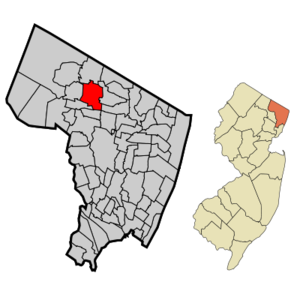 Saddle River is a Borough in Bergen County, , . As of the , the borough population was 3,201. Saddle River has the second-highest per-capita income in the state. Nationwide, Saddle River ranks 28th among the 100 highest-income places in the United States (with at least 1,000 households).

Saddle River was incorporated as a borough by an Act of the on , , from portions of Orvil Township, based on the results of a referendum held three days earlier, at the height of the "" phenomenon sweeping through Bergen County at the time.

The borough is named after the Saddle River, which flows through the borough and is a tributary of the .

There were 1,118 households out of which 31.7% had children under the age of 18 living with them, 76.6% were married couples living together, 3.8% had a female householder with no husband present, and 17.1% were non-families. 14.2% of all households were made up of individuals and 8.5% had someone living alone who was 65 years of age or older. The average household size was 2.77 and the average family size was 3.05.

Saddle River is governed under the Borough form of New Jersey municipal government. The government consists of a Mayor and a Borough Council comprising six council members, with all positions elected at large. A Mayor is elected directly by the voters to a four-year term of office and only votes to break a tie. The Borough Council consists of six members elected to serve three-year terms on a staggered basis, with two seats coming up for election each year. ["2005 New Jersey Legislative District Data Book", , April 2005, p. 165.]

The Mayor serves as Chief Executive Officer, is an Ex-officio member of all Municipal Committees and is the approving authority in the Borough of Saddle River. Mayoral appointments to the various boards and committees in the Borough are subject to confirmation by the Borough Council. Borough Council members serve on various operating committees and function in a liaison capacity to provide information and direction to the entire Governing Body. [ [http://www.saddleriver.org/content/54/57/102/default.aspx Saddle River Form of Government] , Borough of Saddle River. Accessed , .]

On Election Day, , , voters filled two three-year seats on the Borough Council. As of Election Day, the council consisted entirely of Republicans, in a community in which registered Republicans outnumber Democrats by a 6-1 margin. Incumbent Republicans Robert Re (790 votes) and John E. Murray (780) defeated independents Bernd P. Hopp (510) and Michael S. Kelton (500), in an election that focused on attempts to require the capping of private wells in the Burning Hollow section due to the presence of suspected carcinogens in the well water and open space preservation. [ [http://www.northjersey.com/page.php?qstr=eXJpcnk3ZjcxN2Y3dnFlZUVFeXkyJmZnYmVsN2Y3dnFlZUVFeXk3MDEzODEw Saddle River Election Guide] , "", , .] [ [http://www.northjersey.com/page.php?qstr=eXJpcnk3ZjcxN2Y3dnFlZUVFeXkyJmZnYmVsN2Y3dnFlZUVFeXk3MDE2Njg2 Saddle River election results] , "", , .] [ [http://151.198.187.55/countyclerk/2006%20General/2006_General.pdf Bergen County 2006 General Election Results] , . Accessed , .]

The Wandell School, part of the , serves students in kindergarten through grade 5. As of the 2005-06 school year, the school served 207 students. [ [http://nces.ed.gov/ccd/schoolsearch/school_list.asp?Search=1&DistrictID=3414520 Data for the Saddle River School District] , . Accessed , .]

Saddle River students in grades 6 through 8 attend Eric S. Smith Middle School in Ramsey as part of a .

For high school, students (and their parents) may choose to attend either of the following public s, which students attend as part of sending/receiving relationships with each of the respective districts:
* is in Allendale and is attended by students from Allendale, Upper Saddle River, and Ho-Ho-Kus. [ [http://education.state.nj.us/rc/rc06/narrative/03/3700/03-3700-000.html Northern Highlands Regional High School Report Card Narrative] , . Accessed , . "A four-year public high school, Northern Highlands strives to address the needs of all of its students, who come from four towns in northern Bergen County: Allendale, Upper Saddle River, Ho-Ho-Kus, and Saddle River."]
*Ramsey High School is in Ramsey and is part of the , which also serves all Saddle River students attending public middle school. [ [http://education.state.nj.us/rc/rc07/narrative/03/4310/03-4310-000.html Ramsey Public Schools 2007 Report Card Narrative] , . Accessed , . "In addition to serving the residents of Ramsey, the District also educates the students of Saddle River in grades 6-12 through a send-receive relationship."]

The town is serviced mainly by Route 17, which runs directly through the borough, but certain portions are serviced by locations in Ho-Ho-Kus, Waldwick, Upper Saddle River, and Allendale. The is within a short distance of the borough at exit 171 in Woodcliff Lake.