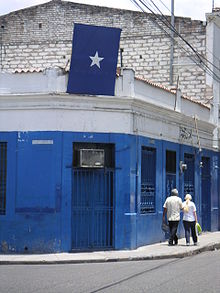 The National Party (Spanish: Partido Nacional de Honduras) is a centre-right conservative political party in Honduras and the main right-wing political party in the country. Founded in 1902 the PNH is identified with the color blue as its rival the Liberal Party of Honduras (PLH), is red. All the democratic elections in Honduras have been dominated by the competition between the PNH and the PLH. The PNH dominated the country between 1933–1957.

At the legislative elections, 25 November 2001, the party won 46.5 % of the popular vote and 61 out of 128 seats in the National Congress of Honduras. Its candidate at the presidential elections, Ricardo Maduro won 52.2 % and was elected president.

In the legislative elections of 27 November 2005, the party won 55 out of 128 seats in the Congress. Its candidate at the presidential elections, Porfirio Pepe Lobo won 46.2 % and was therefore defeated by Manuel Zelaya.[citation needed]