The Conscience-in-Media Award is presented by the American Society of Journalists and Authors (ASJA) to journalists that the society deems worthy of recognition for their distinctive contributions. The award is not given out often, and is awarded to those journalists which the ASJA feels have demonstrated integrity to journalistic values, while enduring personal costs to themselves. Candidates are decided by an initial vote of the ASJA's First Amendment Committee, which must then be confirmed by a separate vote of the ASJA's Board of Directors.

The award has been presented a total of eleven times since the first award was given out in 1975. Notable recipients have included Jonathan Kozol, for work researching homelessness while writing his book Rachel and Her Children, Richard Behar and Paulette Cooper, for separate pieces investigating the Church of Scientology, and Anna Rosmus, for her investigation into the Nazi history of her hometown in Passau, Germany. In 2005, the committee voted to present the Award to Judith Miller, but this vote was later overturned by a unanimous decision of the board not to honor Miller with the award. 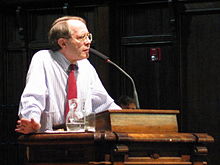 Jonathan Kozol, recipient of the 1988 Award.

The award is given by the ASJA, to recognize "distinctive contributions by any journalist in any medium".[2] The first award was given to Jerald F. terHorst in 1975, and in total the award has been presented eleven times.[3] The award criteria are stringent. The American Society of Journalists and Authors maintains that the writer honored must have knowingly taken risks in the course of researching their story, going beyond the normal call of duty. Specifically, the award is given: "for singular commitment to the highest principles of journalism at notable personal cost".[4][1]

Jonathan Kozol was honored with the 1988 Award, for work done on his book Rachel and Her Children: Homeless Families in America.[5][6] In order to research the plight of homeless people in New York City, Kozol spent the majority of a winter season at the Martinique Hotel in Manhattan, where he grew close with the residents of the government subsidized shelter.[5][7] During his time spent learning about the experiences of the homeless, he most empathized with homeless mothers - who constantly fear that sickness, poverty or intervention from the state of New York will result in the loss of their children. Kozol attempted to analyze the causes of homelessness, and to provide an estimate of what the future would be for the homeless.[5]

Paulette Cooper received the 1992 award along with Richard Behar.

1992 was the only time in ASJA history in which two writers were honored in the same year. The AJSA had already decided to honor investigative journalist Richard Behar, for his Time magazine article about the Church of Scientology: "The Thriving Cult of Greed and Power".[1] Paulette Cooper, a longtime member of the ASJA, had also written about Scientology in her book The Scandal of Scientology, and was the subject of a "Fair Game" tactic that the Church of Scientology Guardian's Office called "Operation Freakout".[8][9] As the award was not in existence at the time Cooper wrote her book, the ASJA decided that recognizing Cooper at the same time as Behar emphasized the commitment and courage both writers imbued in the face of risk to themselves.[10]

Anna Rosmus received the 1994 award, in honor of work related to her research on the Nazi past of her hometown in Bavaria.[11] Rosmus researched anti-Semitism, and opposed neo-Nazis and the extreme right in Germany.[12] She also located and published artwork of Jews that had once lived in her hometown of Passau, Germany.[12] As a result of her work, Rosmus endured threats against her life.[13] In a 1996 Yom HaShoah ceremony, Rosmus recounted threats she faced after conducting her research: "Once-friendly neighbors threatened me openly - on the telephone, in person, in letters ... They threatened to kill me and kidnap my children. Some even attacked me physically, a room where I was to speak in Munich was bombed just before I was to be there, and several times I was sued. Nobody ever claimed I had said anything false or made mistakes. They just claimed all this would damage their reputations."[14] Rosmus was profiled on 60 Minutes, and her story was the subject of the 1990 West German drama film, The Nasty Girl.[13] Rosmus was presented with the Conscience-in-Media Award in a special ceremony at the United States Holocaust Memorial Museum.[15]

In 2005, the ASJA's First Amendment Committee narrowly voted to present Judith Miller with the award, in recognition of her dedication to protecting sources.[16] However, the full board of the ASJA later voted not to accept the decision of its committee, due to its opinion that her career as a whole and her actions in the Valerie Plame CIA leak case had cast doubt on her merits.[17][16][18][19] ASJA president Jack El-Hai stated that the ASJA board's vote to reject the committee's recommendation had been unanimous.[18] This decision sparked controversy, and Jack El-Hai received correspondence both praising the board for its decision, and accusing it of various political motives.[20]