Confessions of a Crap Artist

Confessions of a Crap Artist 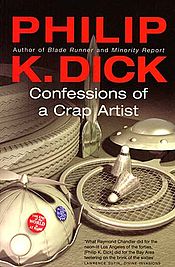 Cover to 2005 Gollancz Paperbacks edition of the book

Confessions of a Crap Artist is a 1975 novel by Philip K. Dick, originally written in 1959. Dick wrote about a dozen non-science fiction novels in the period from 1948 to 1960; this is the only one published during his lifetime.

The novel chronicles a bitter and complex marital conflict in 1950s suburban California from the perspective of the wife's brother, an obsessive compulsive amateur scientist. The novel contains only small amounts of the complex mystical and science fiction concepts that define much of Dick’s work. Rolling Stone Magazine called it a “funny, horribly accurate look at life in California in the 1950s.”[citation needed]

The novel’s protagonist, the “crap artist” of the title, is Jack Isidore, a socially awkward tire regroover obsessed with amateur scientific inquiry since his teens. He catalogs old science magazines, collects worthless objects, and believes disproved theories, such as the notions that the Earth is hollow or that sunlight has weight.

Broke, Jack eventually moves in with his sister’s family in a luxurious farm house in suburban California. On the farm, Jack happily does housework and cares for livestock. He also joins a small apocalyptic religious group, which shares his belief in extra-sensory perception, telepathy and UFOs and believes the world will end on April 23, 1959. However, most of his time is dedicated to a meticulous “scientific journal” of life on the farm, including his sister’s marital difficulties.

Jack’s sister, Fay Hume, is a difficult and subtly controlling woman who makes miserable everyone close to her, especially her misogynist husband Charley. Fay has an extramarital affair with a young grad student named Nat Anteil while Charley is in a hospital recovering from a heart attack. After Jack reports this to Charley, the latter plots to kill Fay.

Charley kills Fay's animals and then commits suicide, realising that Fay has led him to do this. However, his will stipulates that Jack will inherit half the house, and Fay must buy her brother out, although Jack has used his half of the money to replace the slaughtered animals. Nat and his wife Gwen divorce, and Nat decides to stay with Fay. When the end of the world doesn't occur on the predicted date, Jack decides to seek psychiatric assistance.

Jack feels compelled towards ideas and studies that those around him consider worthless. Although Dick never states directly that Jack is mentally ill, his behavior closely mirrors obsessive compulsive disorder and several characters suggest that he seek psychiatric help.

Despite his possible disorder, Jack is the most productive character in the novel. He runs both the farm and the household when Charley is in the hospital without sacrificing his scientific inquiries. At one point in the book, Jack is offered the opportunity to enter into the same comfortable, suburban lifestyle as his sister. Although circumstances prevent him from doing so, Jack’s meticulous nature allows him to go to impressive lengths to secure a job, and to confront difficult and complex financial and legal situations.

Fay and Charley, on the other hand, are wholly destructive characters. Throughout the novel, it is revealed, or at least implied, that each of them has concocted complex plans to emotionally destroy the other due to long-standing bitterness. They refuse to get a divorce both because of the social taboo against it and because each fears losing their luxurious home to the other. Neither shows much concern for their two children.

At the novel’s end, Jack concludes that his obsessions are healthier than those of his sister and his brother-in-law. However, the novel does not argue explicitly that Jack’s illness is acceptable, or not really an illness. In the end, he does accept suggestions that he requires psychiatric assistance, and finally obtains it.

In 1992, French director Jérôme Boivin released Confessions d'un Barjo (Barjo for the English-language market), based on the novel. The film follows the novel fairly closely, although Jack (played by Hippolyte Girardot) is given the nickname “Barjo” (loosely translated as nutcase) and is referred to by that name throughout the film. Also, the story is shifted to contemporary France.