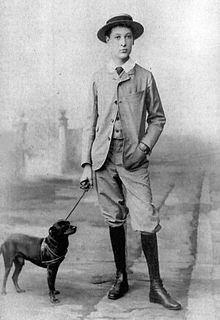 Mihály Károlyi in Franzensbad around 1887.

The Károlyi family were an illustrious, extremely wealthy, Roman Catholic aristocratic family who had played an important role in Hungarian life since the 17th century. Mihály was born in Fót, Austria-Hungary in what is today Hungary. In his youth, he was a wastrel, but as he grew older, he became devoted to more serious pursuits. In 1909, he became the President of the OMGE (National Agricultural Society), the main rural organization of the nobility. Initially a supporter of the existing political and social system in Hungary, Károlyi gradually became more progressive and left-wing during his career.

In 1910, Károlyi was elected to Parliament as a member of the opposition Party of Independence. During the First World War, Károlyi had started out as supporter of the war, but as the war continued, Károlyi had become the war's most notable critic in Parliament. In 1916 Károlyi broke with his party, which had found him to be too radical, to form a new party, called the United Party of Independence and of 1848, and generally known as the Károlyi Party.

The Károlyi Party was always a weak group with no mass organization and only 20 members in Parliament, most of whom had little serious commitment to the party. Károlyi argued for peace with the Allies, looser ties between Austria and Hungary, abolishing the franchise and language requirements that allowed only 5.8% of the male population to vote and run for office before the war, and giving women the right to vote and hold office. In particular, Károlyi's demand in 1915 that veterans should be granted the right to vote won much popular support while enraging the Prime Minister, Count Istvan Tisza. During the war, Károlyi had made covert contacts with British and French diplomats in Switzerland. In January 1918, Károlyi proclaimed himself a follower of Woodrow Wilson's Fourteen Points.

On 7 November 1914 in Budapest, Károlyi married Countess Katalin Andrássy de Csik-Szent-Király et Kraszna-Horka, with whom he had three children. Károlyi's wife was a member of one of Hungary's most powerful families, and this marriage won Károlyi the protection of his influential father-in-law.

Following the Aster Revolution of October 1918, Károlyi became leader of the nation. On October 25, 1918 Károlyi had formed an opposition National Council. His reputation as an opponent of the much-hated war had thrust Károlyi into a role for which he was not suited.[citation needed] He was named Prime Minister by King-Emperor Charles IV as a part of a desperate attempt to hold Hungary to the Habsburgs.[citation needed] Károlyi would have preferred to keep the monarchy and some of link to Austria if possible. Only after Charles's withdrawal from government on 16 November 1918 did Károlyi proclaim the Hungarian Democratic Republic, with himself as Provisional President. On 11 January 1919 the National Council formally recognized him as President.

Many citizens thought that Károlyi could get Hungary soft peace terms from the Allies.[citation needed] Károlyi headed the Provisional Government from 1 November 1918 until 16 November, when the Hungarian Democratic Republic was proclaimed. Károlyi ruled Hungary through a National Council ,transformed into the government that consisted of his party in alliance with the large Hungarian Social Democratic Party and the small Civic Radical Party led by Oszkár Jászi.

At the same time, there existed various revolutionary councils, which were dominated by the Social Democrats, which were not unlike the Soviets (Councils) that existed in Russia in 1917.[citation needed] This situation of Dual Power gave Károlyi responsibility without much power while giving the Social Democrats power without much responsibility.[citation needed] 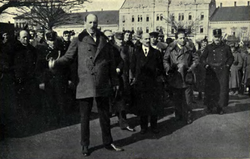 Mihály Károlyi in a speech

During their brief periods in power, Károlyi and Jászi, who served as Nationalities Minister, tried to create an "Eastern Switzerland" by persuading the non-Magyar peoples of Hungary to stay as part of the new Hungarian Democratic Republic. This effort completely failed as the non-Magyar peoples preferred to join Romania, Yugoslavia and Czechoslovakia; the long years of oppression by the Magyars had "borne fruit".[citation needed]

Additional trouble for the new government occurred over the question of the armistice. Austria-Hungary had signed the lenient Armistice of villa Giusti (close to Padua, Italy) with the Allies on 3 November 1918. Since Hungary was now independent, some in the Cabinet argued that Hungary needed to sign a new armistice.[citation needed] Against his better judgement, Károlyi agreed to this idea,[citation needed] and had Hungary sign in November 1918, a new armistice with the Allies in Belgrade with the Allied Commander in the Balkans, the French Marshal Louis Franchet d'Esperey.

Marshal Franchet d'Esperey treated the Hungarians with open contempt and imposed a much harsher armistice on the defeated nation than the Padua Armistice had.[citation needed] This was the source of much criticism of Károlyi, who had been expected - and who himself expected - the Allies to treat Hungary as a friend, not an enemy.[citation needed] Moreover, Károlyi's opponents argued that by needlessly seeking a second armistice, Károlyi had worsened Hungary's situation.[citation needed]

Furthermore, the Social Democrats who were Hungary's largest party by far, frequently undercut Károlyi and imposed their decisions on him without taking responsibility for their actions.[citation needed] Károlyi wished to transfer almost all of the rural land to the peasants.[citation needed] To create an example, he gave all of his own vast family estates to his tenants. But this was the only land transfer that took place; the Social Democrats blocked any measures that might give control of the land to the peasantry under grounds that it was promoting capitalism.[citation needed] 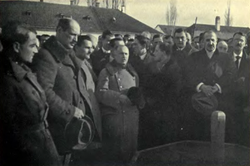 Mihály Károlyi distributing his lands among the peasants.

In another equally unfortunate move, the pacific-minded Károlyi had abolished almost all the Hungarian armed forces in November 1918.[citation needed] All through the winter of 1918-19, the Romanians, the Yugoslavs and the Czechoslovaks often broke the armistice in order to seize more territory for themselves. After January 1919, Károlyi ordered the build-up of a Hungarian army and started to consider the idea of an alliance with Soviet Russia, through Károlyi was opposed to the idea of Communism in Hungary itself.

In addition, as Hungary had signed an armistice, not a peace treaty, the Allied blockade continued until such time as a peace treaty was signed. Hungary had suffered from food shortages throughout the war and deaths from starvation had become common from 1917 onwards. Furthermore, the country had been overwhelmed with refugees from Transylvania and Galicia.

Making things worse was the creation of Czechoslovakia which had cut Hungary off from supplies of German coal. Hungary which possessed little coal depended upon German coal imports. Without coal, most had to live without heat in the winter of 1918-19, and the railroad network had gradually ceased to function. The collapse of railroads in their turn caused the collapse of industry and hence mass unemployment.

Making things even worse was the economic incompetence of the government which printed more and more money, leading to massive inflation and even more impoverishment. Károlyi's failure to improve living conditions or persuade the Allies to lift the blockade led to public criticism of Károlyi.

Baron Lajos Hatvany described Károlyi's leadership well when he noted "From the discussions no decisions arose, and from the decisions - no actions. A cabinet? No, it was a debating club".[1] In the same vein, the British writer Harold Nicolson, who had known Károlyi during his exile in Britain, when reviewing Károlyi's memoirs in 1957 noted that: "he had many qualities, but unfortunately lacked those for which a man is taken seriously by serious people"".[2]

On 20 March 1919 the French presented the Vix Note ordering Hungarian troops further back into Hungary; it was widely assumed that the military lines would be the new frontiers.[citation needed] The Social Democrats merged their party with the Communists led by Béla Kun and announced Károlyi's resignation, proclaiming the Hungarian Soviet Republic. At that point, Károlyi resigned and retired from active politics. 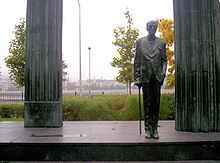 In July 1919, Károlyi went into exile in France and during World War Two, in Britain. Throughout the Horthy era, Károlyi was in a state of official disgrace in his homeland.

In 1946, Károlyi, who by that time had become a socialist, returned to Hungary and from 1947-49 served as the Hungarian Ambassador to France. In 1949, he resigned in protest over the show trial and execution of László Rajk.

He wrote two volumes of memoirs in exile; Egy egész világ ellen ("Against the Entire World") in 1925 and Memoirs: Faith without Illusion in 1954.

He died in Vence, France.