Madisonville is a town in St. Tammany Parish, Louisiana, United States. The population was 677 at the 2000 census. It is part of the New Orleans–Metairie–Kenner Metropolitan Statistical Area.

According to the United States Census Bureau, the town has a total area of 2.4 square miles (6.3 km²), all of it land.

Madisonville was founded by Jean Baptiste Baham in 1800 as the town of Cocquille or Cokie because of the abundance of shells in the area, at the site of the Native American village of Chiconcte. In 1810 it was renamed in honor of President of the United States James Madison.[2]

It was an important port providing bricks and other products of the towns along the Tchefuncte to New Orleans in the decades before the American Civil War. After the Union capture of New Orleans, this area remained under nominal Confederate control, and the cut off of trade with New Orleans across "enemy lines" was devastating to the local economy, which did not recover for decades after the peace.

The opening of the Lake Pontchartrain Causeway and associated highways gradually brought Madisonville into the sphere of Greater New Orleans in the late 20th century.

Much of the town flooded with the Lake Pontchartrain storm surge of Hurricane Katrina in 2005. The police station was destroyed by the floodwaters, along with the lower levels of the fire station. A temporary police substation was built by a Madisonville-based company, T. Sturdevant Inc/dba Barnstormers. The ruined police station was repaired by town workers and reopened for use, while the substation was left intact and is still used as the main office of the current Chief of Police, David Smith.

The Madisonville Lighthouse was built in 1838 and is on the United States National Register of Historic Places. The land route to the lighthouse was destroyed by Hurricane Betsy in 1965, and it has since been accessible only by boat.

John Neely Kennedy, the current Louisiana State Treasurer, is a resident of Madisonville.

The mayor of Madisonville owns a small restaurant, Badeaux's, on Mulberry St. 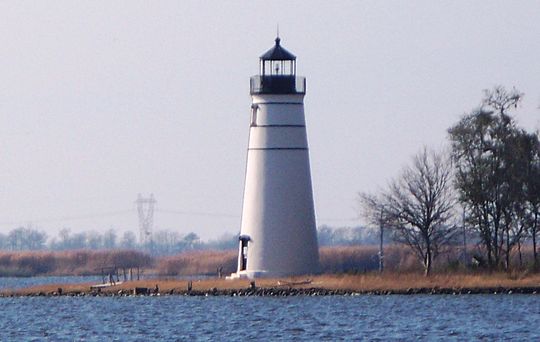 Madisonville's Tchefuncte River Lighthouse, viewed from the east, stands assuringly on the northshore of Lake Pontchartrain. This lighthouse was built in 1837.[5]

There were 302 households out of which 21.9% had children under the age of 18 living with them, 44.7% were married couples living together, 10.6% had a female householder with no husband present, and 38.4% were non-families. 31.8% of all households were made up of individuals and 8.9% had someone living alone who was 65 years of age or older. The average household size was 2.24 and the average family size was 2.81.