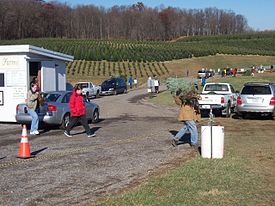 Christmas tree farming is a relatively new agricultural pursuit in Australia with the industry only sprouting up within the early 21st century.[1] There are a number of differences in Christmas tree production in Australia when compared with nations in the Northern Hemisphere. The growing season differs because harvest is during a different time of year, this means that lessons learned about farming in the United States and Europe are more difficult to apply to Australia.[1] The seasonal difference also affects the pruning and shearing schedule for the crop. The other primary difference in Australian Christmas tree farming is found in the type of tree grown, Pinus radiata, which is no longer commonly grown for Christmas trees in the United States and Europe, is popular in Australia.[1] 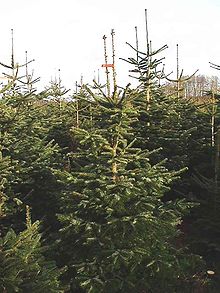 Nordmann fir trees on a Christmas tree farm in Europe.

A Christmas tree farm in the U.S. state of Oregon. Oregon had more area devoted to the crop than any other U.S. state in 2002.

An aerial view of a Christmas tree farm in the U.S. state of Missouri.

The European demand for live trees reaches about 50 million per year, compared with the demand for about 35 million of the trees in the United States.[2] Denmark is a major producer of live Christmas trees, about 90 percent are exported to other European nations, such as Great Britain, France, Germany and Austria. Denmark exported about 1 million trees to Great Britain in 2004.[3] 2005 Christmas tree sales in Denmark was about kr1.2 billion (US$204 million, €160 million), of this amount kr1.1 billion was in exports.[4]

There are more than 20,000 North American Christmas tree growers, 95 percent of the trees they produce are sold or shipped directly from the farms.[6] On each of the 1 million acres (4,000 km2) planted in Christmas trees annually there are usually about 2,000 trees, the number of trees that survive to harvest varies from 750–1,500 depending upon location.[6] Christmas trees take an average of 6 to 10 years to mature for harvest and each year 73 million new Christmas trees are planted.[6]

Of the 40 million live Christmas trees sold in North America each year about 5 to 6 million are grown in Canada.[11] In Ontario, the markets are mainly dominated by sales of the Scots pine, and the White Spruce.[12]

Most artificial Christmas trees are made of 100% recycled plastics from used PVC packaging materials in China.[13] Promoters of artificial trees highlight them as convenient, reusable, and of better quality than artificial trees of old. Supporters also note that some apartment buildings have banned natural trees because of fire concerns.[13]

There is also a robust market for artificial Christmas trees in Poland. An estimated 20 percent of all Christmas trees sold in Poland are artificial, and many are made domestically by individual families. One producer from Koziegłówki stated that every other house was an artificial tree producer. The trees are made from a special film which is imported from China or Thailand. Entire families take part in production and the trees are sold throughout Poland with some being exported to the Czech Republic and Slovakia.[14]

British demand for natural Christmas trees is around 8 million annually, with about two-thirds of households opting for artificial trees.[3] When a Danish tree shortage in 2006 resulted in only 200,000 of the usual 1 million Nordmann Fir trees to the British Isles, British farmers were forced to make up the deficit with Norway Spruce, Fraser Fir, and Scots pine.[3] The shortage was a result of a hot summer and a cut in subsidies for growing Christmas trees in Denmark.[3]

Christmas tree consumers in Europe prefer trees with less density and a more open, layered appearance. This is partially because trees are displayed for a relatively short period of time in Europe, and many are lit with candles.[5]

The market for natural Christmas trees in the United States began to tumble when an oversupply during the late 1980s through the mid-1990s sent prices downward.[15] In 1992, harvests of around 850,000 trees in New England were considered too many and Christmas trees sold for around $5 as opposed to the usual $18–30 each.[16] Natural Christmas tree use continued to decline over the next decade, in part, due to the continued rise in popularity of artificial trees.[17][18] In U.S. states where a marginal number of trees were grown, many growers were driven out of business.[19]

One appeal of Christmas tree farms to growers is that it can be a profitable way to use low quality farmland, though this trend is changing within the industry.[20] [21] Christmas tree farms can turn a profit in as little as six years, and though some overhead in equipment and labor does exist Christmas tree production requires only small amounts of up-front capital.[20] Each tree can cost land owners $5–10 from the time its planted as a seedling until it is harvested as a mature Christmas tree; that cost includes land costs, and costs accumulated through the growing process.[22] In the early 21st century, Christmas tree farmers typically got annual returns of between $600–1,000 per acre of trees planted.[22]

Christmas tree farming has initial costs associated with establishing the farm. Land, if unowned, must be purchased, as does equipment. Crop failures are also not uncommon which can negate years of work.[23] Besides land, and pests, diseases and bad weather tree farmers must contend with costs associated with tractors and other equipment for planting, harvest and cultivation.[23] Fences, storage buildings, worker protection and pesticide regulations also add to the expenses of Christmas tree farms.[23] 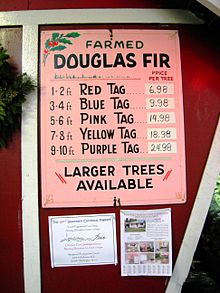 As this sign at a Christmas tree farm in Seattle demonstrates, most tree farmers do not price their trees per foot.

A 2001 study attempted to make predictions about Christmas tree prices and the relationship between tree price and tree age, which corresponds to tree height.[24] The study was based on data obtained from the prices of Christmas trees in North Carolina during December 1997 and used a Hotelling-Faustmann model for its predictions. The results showed, in general, that the change in prices reflected a competitive equilibrium in the capital market, thus support the Hotelling rule. Among the study's results was that, "prices across age cohorts increase at the rate higher than the interest rate." The results also explained the mystery of why Christmas tree merchants do not price trees by the foot. Each foot of an older tree is more valuable than a foot of a younger tree; this is because the percentage increase in price per foot is adversely impacted by the declining growth rate as trees age.[24]