Strand School was a boys' grammar school in the Tulse Hill area of South London. It moved there in 1913 from its original location in the Strand. Distinguished in its heyday for its contribution of young men to the civil service, it finally closed its doors – after failed attempts by municipal education authorities from the 1950s onwards to turn it into a comprehensive – in 1977.

Former pupils included a leader of the Greater London Council, figures prominent in the world of entertainment, and the scientist and environmentalist James Lovelock, originator of the Gaia hypothesis.

Strand School got its name from its original location. When in 1875 the government extended the range of the civil service entry examination, William Braginton had set up private classes in rooms at King's College in the Strand for those seeking entry into the lower grades. The prestige of being associated with the university college was an added benefit. The Civil Service Department, as it was known in the early years, started with an intake of 172 men: it did not yet constitute a school for boys. In 1892 Braginton got permission to run a correspondence course, and day classes, for pupils wishing to compete for 'boy clerkships' and 'boy copyistships'. Thus, in 1893, began Strand School. [1] The name was not apparent, however, till 1897, when King's College School moved to Wimbledon, making it possible for the commercial school to move into the college basement. Examinations on offer had by this time increased beyond those of the civil service as such, to include telegraph learners, assistant surveyorships, as well as those for customs and excise appointments. [2] The success rate of Strand pupils was noteworthy. [2] Many Old Strandians, as they became known, went on to distinguished careers in the civil service.[1] In 1900 the London County Council (LCC) agreed that intermediate county scholarships could be held there, and in 1905 it was allowed to become a centre for the training of pupil teachers. [2]

In 1907 the Board of Education determined that a mere basement was insufficient for a school. The threat of withdrawal of grant support caused the LCC to undertake to provide new buildings in Elm Park, between Tulse Hill and Brixton Hill in South London. In 1909 government of the school was handed over to a committee, which included LCC representatives. [2] As a condition of the incorporation of King's College into the University of London, under the terms of the King's College London Transfer Act 1908, the civil service classes for adults had to be placed under separate administration, so Braginton agreed to make the necessary arrangements: he relinquished the headmastership In 1909, to run St George's College for women, Red Lion Square, and St George's College for men in Kingsway. R.B. Henderson took over as headmaster of Strand School in 1910, and he it was who supervised the move to South London in 1913. [2]

After the move to its new red brick premises, Strand flourished as a grammar school. Though its priority had been to prepare candidates for the civil service, it went on to offer courses leading to the Ordinary and Advanced level GCE examinations. Extra-curricular activities included a variety of sports such as football, cricket, swimming, athletics, boxing and fives. There was active competition between the school's six houses: Arundel, Bedford, Exeter, Kings, Lancaster and Salisbury. There were a number of societies, including debating and dramatic societies, and a cadet force, the army section of which was affiliated to the Kings Royal Rifle Corps. [1] During the Second World War the school was evacuated to Effingham in Surrey.

Strand and the D-Day crossword

In May 1944 ‘Utah’ appeared as a solution in The Daily Telegraph crossword that was to have major repercussions. In May 1944 Utah was also the codename for the D-Day beach assigned to the 4th US Assault Division. This would have been considered coincidence; however, in previous months the solution words Juno, Gold and Sword (all codenames for beaches assigned to the British) had appeared but they are common words in crosswords and then on May 22, 1944 came a clue with the solution Omaha – codename for the D-Day beach to be taken by the 1st US Assault Division. Overlord appeared on May 27 – codename for the whole D-Day operation, and the pattern continued ending on June 1, with the solution to 15 Down being Neptune – codeword for the naval assault phase. MI5 became involved and called on Leonard Dawe, Telegraph crossword compiler and creator of the puzzles in question, at his home in Leatherhead. Dawe was also headmaster of Strand School. Dawe recalled the episode in a BBC TV interview in 1958. However, an explanation of how the codewords came to appear in the paper emerged only in 1984. Ronald French, a property manager in Wolverhampton, came forward to say that, as a 14-year-old at the school in 1944, he inserted the names into the puzzles. According to French, Dawe occasionally invited pupils into his study and encouraged them to help fill in the blank crossword patterns. Later, Dawe would create clues for their solution words. French claimed that during the weeks before D-Day he had learned of the codewords from Canadian and American soldiers camped close by the school, awaiting the invasion. French believed that hundreds of kids must have known what he knew. Another Old Strandian in 1980 is reported to have also owned up to being the perpetrator of the codenames.[3]

Strand served its surrounding area for most of the twentieth century as the local boys' grammar school, with nearby St Martin-in-the Fields High School providing for girls.

In the 1950s came the first serious threat to Strand School's existence. Towards the end of the decade, two large comprehensive schools were opened locally: Dick Sheppard School for girls, and the giant Tulse Hill School for boys, the latter built on what had been the Strand playing fields. Only by a narrow margin – following an intense campaign by parents, old boys and school governors – had the school beaten off a plan to abolish it as a grammar school, and turn it in to one of the two comprehensives: what became Tulse Hill Comprehensive was to have been known as "Strand Comprehensive."

The successful campaign provided what was to prove, in the end, only temporary respite. With the abolition of the tripartite system in education, the Inner London Education Authority took the decision to go fully comprehensive. So in 1972 the ILEA again proposed that Strand, described by Labour's Roy Hattersley as a "small maintained boys' grammar school in an elderly building," be turned into a comprehensive; its pupils were to be transferred to Dick Sheppard, with the Strand and Tulse Hill buildings merged to form a single new comprehensive school. Battle once again commenced.

Margaret Thatcher, at the time Secretary of State for Education, later approved the closure, but not the Tulse Hill School alterations. Strand parents this time chose to contest the closure in the courts: in May 1972 an injunction was granted forbidding closure. The Labour-controlled ILEA was forced to abandon immediate closure of Strand, but made a second application to the minister in July 1972.

Thatcher turned down this application in January 1973, saying that the change of heart was because she had "listened to the parents and watched their fight to save a small school which provided an opportunity for anyone who got there on a basis of merit, whatever his background." [4]

By the late 1970s, nonetheless, Strand School had been closed down. Its remnants were merged with Dick Sheppard, which became, for the time that remained, a mixed school. Of all four schools, the only one to survive the rigours of improvement and shifting education policy was St Martin-In-The-Fields. Tulse Hill closed in 1990, and Dick Sheppard in 1994.

After Strand School's closure in 1977, the buildings became known as the Strand Centre and have had various uses. They were used as temporary premises for "decant" schools; and, more recently, by an Albanian Youth Group.[5] In 2000 they were converted for use as a primary school – to house Brockwell Primary School while the new Jubilee Primary School was being built on Brockwell's site. When Jubilee Primary finally opened in 2003 the Strand premises again fell vacant. 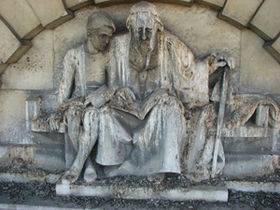 Wisdom teaches youth: the alto-relievo above the school's main entrance in Elm Park

The buildings near the southern end of Elm Park were built by the London County Council between 1912 and 1914 under the direction of the chief architect W.E. Riley. [7] The style employed was Edwardian, with a red brick frontage decorated with Portland stone dressings, enlivened by a magnificent central stone arched window incorporating a fine sculpture.[7]

Other features of the school were its main hall with its war memorial to pupils and former pupils who died in the First and Second World Wars, in the form of an imposing organ bought by public subscription, the gymnasium at the rear of the main building, and, on the top floor, what were once well-equipped laboratories and the dining hall. [1] In the 1960s a two-storey art and woodkwork/metalwork block was built next to the gymnasium.

The school has been described as, "One of the finest secular buildings in terms of its architectural quality and character" and, "a splendid local landmark of significant historic and architectural interest in its own right." [7] 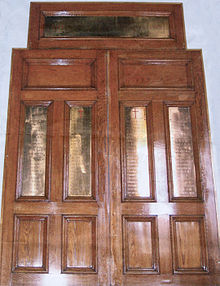 School War Memorial to those who died in World War I

School War Memorial to those who died in World War II

Former pupils are known as Old Strandians [1] and among their number are the following: