The term die-cast toy here refers to any toy or collectible model produced by using the die casting method. The toys are made of metal, with plastic, rubber or glass details. Wholly plastic toys are made by a similar process of injection moulding, but the two are rarely confused. The metal used is either a lead alloy (in the first toys), or more commonly Zamak (or Mazak in the UK), an alloy of zinc with small quantities of aluminium and copper. Lead, as previously so widely used for cast metal toys, or iron are impurities that must be carefully avoided in this alloy, as they give rise to zinc pest. These alloys are also referred to casually as white metal or pot metal, although these terms are also confused with the lead toy alloys. The most common die-cast toys are scale models of automobiles, aircraft, construction equipment and trains, although almost anything can be produced by this method. 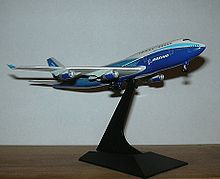 Diecast (or die cast, or die-cast) toys were first produced early in the 20th century by manufacturers such as Meccano (Dinky Toys) in the United Kingdom and Dowst Brothers (TootsieToys) in the United States. The first models on the market were basic, consisting of a small car or van body with no interior. In the early days it was common for impurities in the alloy to result in zinc pest; the casting would distort or crack for no apparent reason. As a result, diecast toys made before World War II are difficult to find in good condition. The later high-purity Zamak alloy avoided this problem.

Lesney began making diecast toys in 1947. Their popular Matchbox 1-75 series was so named because there were always 75 different vehicles in the line, each packaged in a small box designed to look like those used for matches. These toys became so popular that "Matchbox" was widely used as a generic term for any diecast toy car, regardless of who the actual manufacturer was.

The popularity of diecast toys as collectibles developed in the 1950s, as their detail and quality increased. Consequently, more companies entered the field, including the Corgi brand, produced by Mettoy, which appeared in 1956 and pioneered the use of interiors in their models.

In 1968, Hot Wheels were introduced in the United States by Mattel, to address the complaint that they had no line of toys for boys to balance their line of Barbie dolls for girls. Because they looked fast and were fast (they were equipped with a low-friction wheel/axle assembly), Hot Wheels quickly gained an important niche in the diecast toy market, becoming one of the world's top sellers and challenging the Matchbox 1-75 series in popularity.

During the 1960s various companies began to use diecast vehicles as promotional items for advertising. The idea that children can play a large part in a family's decision as to what products to buy came into wide circulation. In addition, by the 1980s it was apparent that many diecast vehicles were being purchased by adults as collectibles, not as toys for children. Companies such as McDonald's, Sears Roebuck, Kodak, and Texaco commissioned toymakers to produce promotional models featuring their names and logos, or licensed their use. One early example was an American Airlines London bus produced by Matchbox, an idea some other airlines quickly copied.

Beginning in the mid '70s trucks and other commercial vehicles took a lion's share of the diecast market. Matchbox started the trend when they re-launched their Models of Yesteryear range. They made a score of different versions of their Y-12 Ford Model T van, along with other trucks in colorful liveries such as Coca-Cola, Colman's Mustard, and Cerebos Salt. They also made promotional versions for Smith's Crisps (potato chips) and Harrods department store. Some models were made exclusively for certain markets and immediately became quite expensive elsewhere: Arnott's Biscuits (Australia) and Sunlight Seife (soap, Germany) are examples. 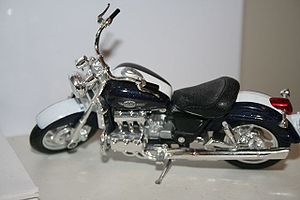 1:24 Diecast Model of the Honda Valkyrie

Corgi copied this idea when they expanded the Corgi Classics line in the mid-'80s, producing more than 50 versions of a 1920s era Thornycroft van. Some collectors disparaged this development as "collecting paint," as the castings were identical; only the decorations were different. Other collectors created what they called the "10-Foot Rule" when the collecting of minor variations of the same vehicle got out of hand. The idea was that, if you couldn't differentiate between two versions of a model from 10 feet away, it wasn't worthwhile to collect both of them.

Despite their popularity, many diecast manufacturers went belly-up in the 1980s. Meccano (Dinky), Matchbox, and Corgi all went bankrupt within a three-year span, which essentially reflected the economic climate in the UK at that time. It had become virtually impossible to manufacture in England and compete on the world market. (Mattel had also long since shifted most of their production from the USA to the far east.) Matchbox was purchased by a Hong Kong conglomerate named Universal Holdings, which moved production from England to Macau. Later (1997), Mattel bought Matchbox, essentially making Hot Wheels and the Matchbox 1-75 line sister brands. The two brands continue to sell under their own separate names.

Meanwhile, Corgi had been acquired by Mattel, which moved the office from Swansea, Wales to Leicester, England, and moved manufacturing to China. Matchbox also bought the Dinky Toys name, long after the Liverpool factory was closed. Manufacturing resumed in China. In a series of subsequent shifts, a group of Corgi executives bought back the Corgi Classics line from Mattel, and portions of the Matchbox line were sold to an Australian company named Tyco (no relation to the Tyco line of HO scale trains, originally made by Mantua Metalworking in New Jersey, USA). 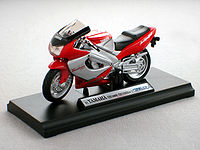 Effectively from the ashes of Matchbox's bankruptcy arose Lledo, a company created by former Matchbox partner Jack Odell. Odell believed that British collectibles for British collectors could still be profitably produced in England. Lledo took over part of the Matchbox factory in Enfield, and introduced their "Models of Days Gone" line of diecast vehicles in 1983. The first series of Days Gone models included re-makes of some of the most popular and respected first and second-generation Matchbox Models of Yesteryear. Lledo models were very popular collectibles in the '80s, leading to a period of diversification (incl. the Vanguards line of classic post-war British vehicles), but by the '90s they were eclipsed by other brands, and by 2002 Lledo went broke. Parts of their line were purchased by Corgi, which moved production to China.

In addition to trucks, Corgi produced hundreds of versions of their 1/64 scale Routemaster bus in the '80s and '90s. Like other collecting and promotional model trends, it started as a trickle and soon became a flood. Many versions were made to be sold exclusively in the stores whose advertising appeared on the buses. Harrods, Selfridges, Gamley's, Hamley's, Army & Navy, Underwood's, and Beatties were among the British stores employing this idea. A South African chain called Dion was one of the few overseas firms to follow suit.

Then 1/76 scale buses became very popular in Britain in the late '80s and early '90s, with competing lines from Corgi (the Original Omnibus Company) and Gilbow Holdings (Exclusive First Editions, or EFE) fighting for the market. The 1/76 scale fits in with British 'OO' scale model trains.

By the 1990s NASCAR enjoyed increasing popularity in the USA, and a large number of racing-related Nascar diecast cars and trucks, painted in the colors of the different racing teams, appeared from various manufacturers. Racing Champions was a leading brand of such models, but there were many others.

In addition to cars, trucks, buses, agricultual implements, and construction equipment, diecast aircraft and military models were popular. While Dinky had made such models decades earlier, new companies entered the field in the '80s and '90s. One producer was Dyna-Flytes, which went bankrupt in the 1990s, but their market share was quickly taken up by their competitors, including Schabak, GeminiJets, Herpa, and Dragon Wings.

Die-cast toys and models come in various scales, the most popular ones being:

Items such as toy restaurants and filling stations are sometimes sold separately from the cars, to be used as playsets. Toy raceways are also sold for use with die-cast cars, which have become more complicated in recent years, usually involving loops and complicated curves. Also produced are carry cases made specifically for children to be able to travel with their cars.