Mariel of Redwall is a fantasy novel by Brian Jacques, published in 1991. It is the fourth book in the Redwall series.

When a young mousemaid loses her memory in a shipwreck, she takes the name "Storm Gullwhacker" after a successful encounter with a seagull. As she regains her memory while at Redwall Abbey, however, she swears vengeance against Gabool the Wild, the searat who had tried to slay her, and had taken her father captive. 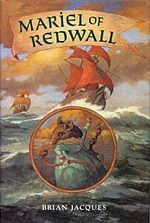 US cover of Mariel of Redwall

The protagonist, Mariel Gullwhacker, was enslaved by Gabool the Wild when her father Joseph's ship, the Periwinkle, was captured. It had been carrying a bell to Lord Rawnblade Widestripe in Salamandastron, and that, too, was seized by Gabool. After attacking Gabool, the mouse was thrown into the sea and washed up on the shore, causing her to lose her memory. She took the name "Storm Gullwhacker", and gave the name "Gullwhacker" to the rope she had used to fight off a seabird.

Three members of the Long Patrol, Colonel Clary, Brigadier Thyme, and the Honorable Rosemary, escort Mariel to a squirrel named Pakatugg. He is given the task to lead Mariel to Redwall, where the woodlanders help her regain her memory. She befriends a young fieldmouse named Dandin, a hedgehog named Durry Quill, and a hare that carries an instrument called a harolina named Tarquin Longleap Woodsorrel, and together they journey to Gabool's island of Terramort to defeat him. Lord Rawnblade also joins the four comrades later on to help them defeat Gabool in his fortress of Bladegirt, where he commands a fleet of searat and corsair ships. The denizens of Redwall, meanwhile, defended the Abbey against Graypatch, a searat on the run from Gabool's army, and his horde. Clary and Thyme, along with Pakatugg, are killed freeing slaves from Graypatch's camp. Graypatch decides to return to his ship but is killed by Oak Tom, a squirrel allied with Redwall.

Gabool, meanwhile, is slowly being driven insane. After capturing Mariel's father, who was transporting the bell to Salamandastron, he begins to hallucinate, believing to hear the bell ring when no one else is in the room. After a battle with the protagonists, Gabool is killed by his pet scorpion. The bell is eventually recovered from Gabool and given to Redwall Abbey as a gift. Named after its creator, it becomes the Joseph Bell.

Characters in Mariel of Redwall

Gabool's ships and their crews