Marlfox is a fantasy novel by Brian Jacques, published in 1998. It is the eleventh book in the Redwall series. Marlfoxes are an unusual breed of anthropomorphic foxes, which serve as the main antagonists in the book.

When the treasure hungry Marlfoxes steal the lavish tapestry of Martin the Warrior from Redwall Abbey, a group of young Redwallers must go after the Marlfoxes in pursuit, while the remaining Redwallers fight off a vermin invasion back at the Abbey.

The wandering Noonvale companions travel to Redwall, where they will mount a show.

The Marlfoxes consist of High Queen Silth and her brood. They are different from other foxes in their fur, which gives them the ability to blend in to almost any surrounding, invisible to all but the keenest eye. This ability has given rise to the false rumor that the Marlfoxes possess magic, which they do not. However, Marlfoxes are highly agile and skilled with axes.

Castle Marl, home of the Marlfoxes, is situated in the middle of an enormous inland sea, on the island that was once home to Badger Lord Urthwyte the Mighty. The Marlfoxes command a vast army of water rats, and they travel around the country seeking rare and priceless artifacts. 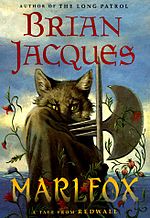 The Marlfoxes, backed by an army of water rats, mount a successful invasion of Redwall and steal the tapestry of the long dead hero, Martin the Warrior. The Marlfox Ziral, however, is slain, and the remaining Marlfoxes swear revenge on the citizens of Redwall.

Mokkan, one of the Marlfoxes, escapes with the tapestry, leaving his siblings behind. Three young Redwallers, Songbreeze Swifteye, Dannflor Reguba, and a Guosim shrew named Dippler set out after Mokkan, trying to retrieve the tapestry. They meet Burble, a water vole, and have many adventures and meet many friends who help them on their journey, such as the gynormous hedgehog Sollertree,who lost his daughter Nettlebud to the Marlfoxes and water rats, and the Mighty Megraw, a large osprey who used to live by the Marlfox island but was driven away in an ambush by magpies.

Song, Dann, Dippler and Burble meet some new friends and set out into the great lake to the island. Mokkan finds that Silth has been killed by one of his sisters, Lantur. He promptly kills her by pushing her into the lake, proclaiming himself King. However, the companions arrive and overthrow the water rat army. Mokkan escapes in a boat, but an escaped slave, whom we find out is Nettlebud, throws a chain at him and knocks him into the lake, where he is eaten by pike.

The surviving water rats are left on the island to become peaceful creatures and farm the land, and the companions return home to Redwall, where Songbreeze Swifteye is named Abbess and Dannflor Reguba is named Abbey Champion by Cregga Rose Eyes, Redwall's blind badgermum. Dippler is named Log-a-log, and Burble is named Chief of the Watervoles.

At the end of the novel is a note, stating that the entire tale was made into a drama, edited by one Florian Dugglewoof Wilffachop.

A rare silver morph of the common Red Fox.

The "Marl" sub-species of foxes portrayed in Marlfox actually do exist. Silver colored foxes are a rare color mutation of the common red fox. In the novel, the Marlfox characters are:

(These divisions are called "acts," instead of "books," as in the other installments of the series. This is explained by a note at the end stating that it had been edited by Florian, the hare leader of the Wandering Noonvale Companions.)