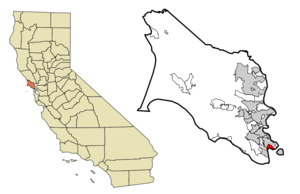 mapsize = 250x200px
map_caption = Location in Marin County and the state of

Situated on the Tiburon Peninsula, between and the Town of Tiburon, Belvedere consists of two "islands" and the lagoon () between them. The larger of the two islands is , and the smaller one is Corinthian Island, which is shared with Tiburon.

The first settlers arrived in the late 1800s, then the railroad came and Tiburon was the last stop for passengers and cargo heading to San Francisco and beyond.Fact|date=December 2007 The Belvedere Lagoon was partially filled after World War II to provide building sites for tract houses and to improve access to Belvedere Island. It was also once the home to a 9 hole golf course.Fact|date=December 2007

The City Hall was formerly a Presbyterian Church. It was moved to its present location on San Rafael Avenue in 1949.

Late actress , who played Ethel on the show died in this city at the age of 70.

Belvedere sits on the south side of the tip of Tiburon Peninsula, a small peninsula that extends into the . Many Belvedere properties are renowned for their spectacular views of the , , , Sausalito, the and . As a result, land values are extremely high. As of 2000, 87.6% of the city's owner-occupied housing units cost more than $1,000,000, compared with 2.3% for California as a whole

No restaurants or stores are allowed in Belvedere, and the city enforces strict rules regarding house design and setbacks in order to preserve trees, views, and the town's spacious, wooded character.Fact|date=December 2007 The adjacent city of Tiburon, however, is home to a wide range of services, shops, and eateries.

There were 956 households out of which 24.0% had children under the age of 18 living with them, 62.4% were married couples living together, 4.9% had a female householder with no husband present, and 31.3% were non-families. 27.0% of all households were made up of individuals and 15.3% had someone living alone who was 65 years of age or older. The average household size was 2.22 and the average family size was 2.68.

Largely because of the high cost of housing, the median age of residents in 2000 (52.7 years) was much higher than that for California as a whole (33.3 years).

It is the only town in , to have more registered Republicans than Democrats, the former outnumbering the latter by 8 people.