The New York City Police Department Highway Patrol, also known as the NYPD Highway Patrol or by the shorthand NYPD HWY, is a specialized unit under the auspices of the NYPD's Transportation Bureau primarily responsible for patrolling and maintaining traffic safety on limited-access highways within New York City. The NYPD Highway Patrol's other duties and roles include accident investigations, advanced driver and radar training for NYPD officers, field sobriety testing, dignitary and parade escorts, hazardous material and truck traffic enforcement, anti-drag racing programs, and anti-terrorist checkpoints at key bridges and intersections in the city.

History of the NYPD Highway Patrol

The NYPD Highway Patrol's origins begin in 1911 with the formation of the NYPD's first motorcycle squad, which was formed to meet the challenges of handling increasing traffic danger concomitant with the rise of automobile use. The unit—then simply known as the Motorcycle Squad—was enlarged as automobile traffic and speeding arose as major problems for the city, and in 1929, the unit was expanded to include armored motorcycles for use in anti-gang activities by the NYPD.

In 1933, the unit expanded to include a formally designated "Grand Central Parkway Motorcycle Squad" for patrol on a limited-access highway.

Until 1972, the unit remained primarily focused on the Motorcycle Squad, when in that year the motorcycle division was merged with the NYPD's Accident Investigation Squad to officially form the NYPD Highway Patrol. The Highway Patrol patch was created, however, five years later in 1977.

The NYPD Highway Patrol is currently divided into five command units which correspond with the five boroughs of the city :

In addition to the vehicular distinctions between the Highway Patrol and the general NYPD, there are differences in the uniforms as well. Aside from the Highway Patrol patch, Highway Patrol officers wear a uniform designed for both practical use and with traditional connections with motorcycle patrol duty in mind. In comparison with most NYPD officers' plain slacks or cargo pants, Highway Patrol members wear tapered motorcycle breeches with a uniform-width blue stripe, as well as a "crushed"-style version of the NYPD's eight-point cap or a two-toned motorcycle helmet. 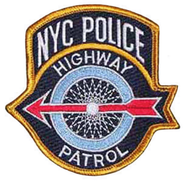 The former patch of the NYPD Highway Patrol.

Motorcycle or riding boots are worn whether an officer is assigned to motorcycle duty or not, excepting those assigned to NYPD Highway Patrol Motor Carrier Safety Unit details; NYPD Highway Patrol Motor Carrier Safety Unit officers wear regular black work boots or low quarters, cargo pants, jumpsuit, and nylon jacket. The Highway unit is also one of only two units within the NYPD allowed to wear leather jackets, as these jackets are better able to prevent injuries from motorcycle crashes. Additional unique uniform features are the unit's use of a Sam Browne belt, sidearm lanyards, and a specialized summons book pouch on their belt. The uniform and vehicle distinctions help give the Highway Patrol unit an elite look and prominent presence within the department.

The combination of the crushed cap, riding boots and the blue "distinction lace" on the Highway Patrol Uniform is in direct opposition to United States Army traditions; i.e., the uniforms worn by NYPD Highway Patrol are reminiscent of Cavalry, yet the blue is symbolic of Infantry. The color of the "distinction lace" -- also known as "piping" -- was switched from a black one inch band to the current blue piping under former New York City Police Commissioner William Bratton, who initiated the change in order to emulate the Boston Police Department's motor unit. 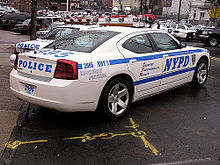 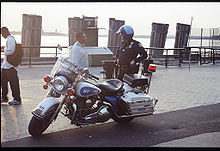 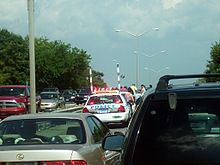 An NYPD Highway Patrol RMP with the riser lights up.

The Highway Patrol vehicle fleet is primarily made up of Ford Crown Victoria Police Interceptors. There are also Dodge Chargers equipped with Hemi engines, Ford Explorers, and Chevrolet Tahoes in the vehicle fleet. They are not termed as "cruisers" but rather as Radio Motor Patrol units (RMPs). Highway Patrol vehicles differ from more typical NYPD vehicles in that they feature a larger and more complex moveable light bar on the roof called "risers", which rise up into the air to promote greater visibility on highways and also to warn oncoming vehicles of the presence of danger or an obstruction. Highway Patrol RMPs are additionally enforced with push bumpers to enable officers to push disabled vehicles off or out of a highway lane in order to smooth traffic flow. These vehicles also offer a much stronger engine compared to regular NYPD RMP's. A Highway Patrol RMP is also distinguished from other NYPD automobiles by its "HWY" designation on the rear of the car followed by its command unit number; additional Highway Patrol stenciling may also be present across the front and/or the rear windshield.

In addition to automobiles, the Highway Patrol continues to use motorcycles in its daily traffic duties; currently the Highway Patrol uses Harley-Davidsons, and these are most prominently used when escorting visiting national or foreign dignitaries to New York, or when opening many of the city's parades. 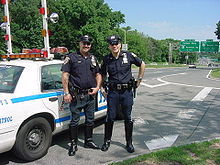 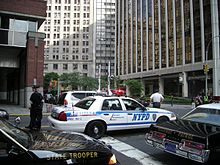 The NYPD has a volunteer unit of the NYPD Highway Patrol Unit. This unit is called the New York City Police Department Auxiliary Police Highway Patrol Unit. The unit is made up of trained volunteer officers who volunteer their time to assist full time Highway Patrol officers by patrolling the highways, parkways and main thoroughfares throughout the City of New York. The officers in this unit are unarmed with handcuffs, a straight baton, whistle, flashlight, reflective traffic vest, and a police radio that is directly linked to the Central Dispatcher, other Auxiliary Police officers, and full time officers. These officers are unpaid, and receive no benefits for their work. The main jobs for these officers are to assist disabled vehicles and to aid in traffic control responsibilities at accident and fire scenes. Since these officers don't carry a firearm, they are not permitted to make traffic stops unless authorized to make them by a full time officer.

Auxiliary Police recruits must pass a 16-week "Auxiliary Police Basic Training Course" which is classified as "Part Time Peace Officer Training". Auxiliary recruits are required by the New York State Municipal Police Training Council to undergo and pass this training course before they become Auxiliary Police officers. The training given in this course includes training in penal law, radio use, unarmed self defense including the use of pressure points, self defense with a nightstick, first aid, firearm safety, domestic violence, and arrest procedures. A written and physical exam is given at the end of training.

All Auxiliary Police officers are required by New York State to pass an annual refresher course in the use of force with the nightstick, arrest procedures, and Equal Employment Opportunity (EEO). 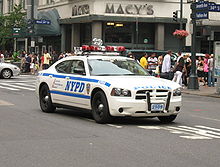