Regent's Park Open Air Theatre, in the City of Westminster, London, is a permanent venue with an annual sixteen-week summer season. It was founded in 1932 by Sydney Carroll and Robert Atkins.[1]

The theatre is located in Queen Mary's Gardens, on the inner-circle of Regent's Park and consequently is surrounded entirely by parkland. It is completely uncovered; the only sheltered area being underneith the tiered auditorium, which houses one of the longest bars of any theatre in London — stretching the entire length of the seating. The bar serves full meals from one and a half hours before performances begin and remains open for light refreshments until midnight. A barbecue is also provided as well as a picnic lawn with tables for the audience to bring their own food.

The theatre houses an extensive backstage area complete with green room for the company and technical team, a full wardrobe, makeup and wigs department, a workshop and paintshop for the creation and maintenance of stage sets and numerous offices for stage management, sound, LX and other crew.

Being open air, performances are dependent on the not-so dependable British weather. In the case of wet weather, the Met Office is called to determine the immediate forecast. Shows cannot be held for longer than 45 minutes, especially in the case of matinees as the delayed finish will dramatically interfere with the technical preparations for the evening show.

The theatre is a registered charity, run by an Artistic Director and CEO, and a Board of Trustees, Chaired by Councillor Robert Davis DL, and including Sir Peter Rogers, David Conville and Dame Judi Dench. 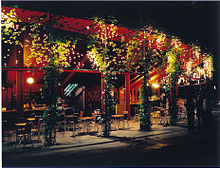 2007 saw the 25th and final year of artistic director, Ian Talbot. The Season included productions of Macbeth, A Midsummer Night's Dream, Lady, Be Good, Fantastic Mr Fox and The Boy Friend. The choice to perform Lady, Be Good was in reflection of his final year, being the first musical he directed at the park.

Timothy Sheader became Artistic Director of the theatre in November 2007. His first season, produced in 2008, consisted of productions of Romeo and Juliet, Twelfth Night, Lerner and Loewe's Gigi - starring Millicent Martin as Mamita and Topol as Honore - and an especially adapted production of A Midsummer Night's Dream for family audiences.

2009 saw Timothy Sheader's second season as Artistic Director of the theatre. Productions included Much Ado About Nothing, The Importance of Being Earnest, The Tempest (adapted for family audiences) and Hello, Dolly!. Dolly! won several awards, including the Olivier Award for Best Revival of a Musical and Best Actress in a Musical for its star Samantha Spiro.

In 2010, the theatre presented new productions of The Crucible, The Comedy of Errors and Macbeth, which was adapted for younger audiences. The Season musical was Into the Woods, by Stephen Sondheim. The production starred Hannah Waddingham, as the Witch, Jenna Russell, as the Baker's Wife, and Helen Dallimore, as Cinderella. It was the first (and only) time that Into the Woods had been performed outside and won the Olivier Award for 'Best Musical Revival".

The 2011 season was announced in November 2010 and is to include productions of: Lord of the Flies; The Beggar's Opera; Shakespeare's Pericles (re-imagined for everyone aged six and over) and George and Ira Gershwin's Crazy for You.