The first Clock King was originally an enemy of Green Arrow, but has become more identified by his appearances in Justice League International and Suicide Squad, and subsequent adaptations in Batman: The Animated Series. He has no super-powers or abilities other than a rigid sense of order and timing. Clock King is a master planner and sometimes uses clock-themed gadgetry. He wears a clock mask, a cape, and a blue suit with clock drawings on it. The same, or a similar a character, called "the Clock" appeared in Star Spangled Comics #70 (July 1947) and fought Robin; the Clock wore a blue business suit, an orange fedora, glasses and a red tie with a picture of a clock. The second Clock King is a member of Terror Titans.

Born William Tockman, Clock King spends his early years taking care of his invalid sister. One day he finds out from a doctor's visit that he himself only has six months to live. Despairing for his sister's future, he watches the timing of a local bank's vault in order to rob it, hoping the money would provide for his sister after he was gone. His caper would have gone successfully, had he not tripped a silent alarm and been caught by the Green Arrow.[1]

While he is incarcerated, his sister dies alone. In further hideous irony, Tockman discovers that he really isn't terminally ill; his doctor had accidentally switched his papers with those of another patient. Infuriated, he escapes, later futilely attempting revenge on the Green Arrow.

With several other villains, the Clock King becomes a member of the Injustice League, a team of out-of-luck supervillains who, when banding together, become even less successful than they have been in their individual careers.[2] The Injustice League is defeated time and again by the Justice League International, at least when they are not making laughingstocks of themselves. Trying to reform, the members later become the core of the equally laughable hero team Justice League Antarctica. This JLA includes G'Nort, who ends up saving the lives of the entire team.[3] Like his compatriots, Clock King becomes an ardent supporter of Maxwell Lord, partly due to the fact he is the only one willing to hire them. His group even guards Lord when he is incapacitated by a bullet wound.[4] The villains again later reform as the Injustice League as henchmen of Sonar.[5]

Later, Clock King leads his own, separate team of villains in a mission. They consist of Radiant, Sharpe, Acidia and Crackle. They are not as well-organized as even the Injustice League. For example, Crackle still lives with his mother and they have to take the bus to their fight. It takes place at a Metropolis toy store. They end up fighting one of the many incarnations of the Teen Titans, the heroes Booster Gold and Firehawk and DEO agent Cameron Chase. An unclear super-effect from Chase ultimately neutralizes Clock's team and they are all imprisoned. Clock himself escapes on another bus.[6]

Still later, Clock's friends are transformed into the new Suicide Squad. They are sent to a remote research facility where a genetic monstrosity is holding its creator hostage. Its main defenses are spawned "children" that could explode. During the mission, most of the team are seemingly killed, including Clock King, who is shot repeatedly in a retreat attempt. He is seen still alive after his brutal wounds but, in the end, Major Disaster believes he is the only one who survives. It turns out Cluemaster, shot in a similar manner as Clock King, survives, albeit with drastic scarring. (Suicide Squad (second series) #1).[1] Multi-Man also survives due to his ability to be reborn with new powers after dying.

Clock King is not seen for a period of time after Infinite Crisis. In an issue of 52, one character decides to kill all the time-travelers, and mentions someone "ending up like Time Commander and Clock Queen." 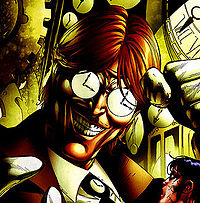 A new Clock King appears in Teen Titans #56 as the head of a team of legacy villains named the Terror Titans. In an interview with Teen Titans writer Sean McKeever, he described this Clock King as "...Very smart. He sees things differently than others."[7] Although his full name has not been confirmed, Disruptor did refer to him as "Tem" before being killed. His costume is similar to the suit worn by the Clock King seen in Batman: The Animated Series, although with clock faces on the tie and lapel. After his group defeats and captures Kid Devil, Clock King conditions the hero to be sold as a fighter to a group called "The Dark Side Club". Clock King then brings the Titans to his base of operations, a dimension outside of time. After besting Robin, Clock King is stymied by Ravager, who possesses similar precognitive abilities. He offers Ravager a chance to join him, but she refuses. Clock King then removes the Titans from his base and decides to move on to new plans. Ravager ultimately reconsiders his earlier offer. In the Terror Titans miniseries, Clock King takes over The Dark Side Club, and uses it to brainwash young metahumans, turning them into his very own "Martyr Militia". He sends the Militia to attack the city Los Angeles, for no reason other than to amuse him.[8] Clock King's plans are eventually undone by Miss Martian, who was posing as one of the captured Metahumans, and Ravager, who attacks and defeats him, forcing him to flee his base of operations.[9]

In the alternate timeline of the Flashpoint event, Clock King is imprisoned in military Doom prison. During the prison break, Clock King joined Heat Wave and Plastic Man to retrieve his weapons.[11] 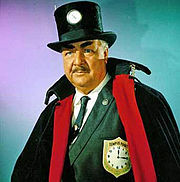 Walter Slezak as The Clock King in the 1960s Batman show 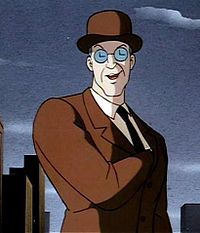