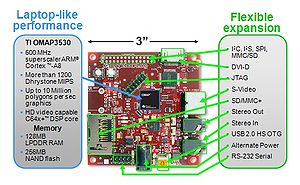 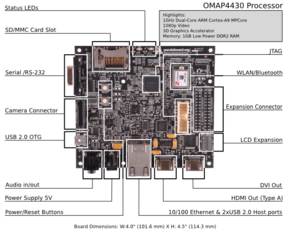 Further, two main distribution channels exist, and not all parts are available in both channels. The genesis of the OMAP product line is from partnership with cell phone vendors, and the main distribution channel involves sales directly to such wireless handset vendors. Parts developed to suit evolving cell phone requirements are flexible and powerful enough to support sales through less specialized catalog channels; some OMAP 1 parts, and many OMAP 3 parts, have catalog versions with different sales and support models. Parts that are obsolete from the perspective of handset vendors may still be needed to support products developed using catalog parts and distributor-based inventory management.

Recently, the catalog channels have received more focus, with OMAP35x and OMAP-L13x parts being marketed for use with various applications where capable and power-efficient processors are useful.

These are parts originally intended for use as application processors in smartphones, with processors powerful enough to run significant operating systems (such as Linux, Android or Symbian), support connectivity to personal computers, and support various audio and video applications.

The OMAP 1 family started with a TI-enhanced ARM core, and then changed to a standard ARM926 core. It included many variants, most easily distinguished according to manufacturing technology (130 nm except for the OMAP171x series), CPU, peripheral set, and distribution channel (direct to large handset vendors, or through catalog-based distributors). In March 2009, the OMAP1710 family chips are still available to handset vendors.

These parts were only marketed to handset vendors. Products using these include both Internet tablets and mobile phones:

The 3rd generation OMAP, The OMAP 3[1] is broken into 3 distinct groups: the OMAP34x, the OMAP35x, and the OMAP36x. OMAP34x and OMAP36x are distributed directly to large handset (such as cell phone) manufacturers. OMAP35x is a variant of OMAP34x intended for catalog distribution channels. The OMAP36x is a 45 nm version of the 65 nm OMAP34x with higher clock speed.[2]

The video technology in the higher end OMAP 3 parts is derived in part from the DaVinci product line, which first packaged higher end C64x+ DSPs and image processing controllers with ARM9 processors last seen in the older OMAP 1 generation or ARM Cortex-A8[3].

Not highlighted in the list below is that each OMAP 3 SoC has an "Image, Video, Audio" (IVA2) accelerator. These units do not all have the same capabilities. Most devices support 12 megapixel camera images, though some support 5 or 3 megapixels. Some support HD imaging.

The 4th generation OMAPs, OMAP 4430, 4460 (formerly named 4440),[7] and 4470 all use dual-core ARM Cortex-A9s. The 4470 additionally contains two ARM Cortex-M3s running at 266 MHz to offload the A9s in less computionally intensive tasks to increase power efficiency.[8][9][10] 4430 and 4460 use a PowerVR SGX540 integrated 3D graphics accelerator which runs at a clock frequency of 304 and 384 MHz respectively compared to prior versions of SGX540 typically at 200 MHz making them theoretically much faster.[11] 4470 has a PowerVR SGX544 GPU that supports DirectX 9 which enables it for use in Windows 8 as well as a dedicated 2D graphics core for increased power efficiency. All OMAP 4 comes with an IVA3 multimedia hardware accelerator with a programmable DSP that enables 1080p Full HD and multi-standard video encode/decode.[12][13][14][15][16] OMAP 4 uses ARM-Cortex A9s with ARMs SIMD engine (Media Processing Engine, aka NEON) which may have a significant performance advantage in some cases over Nvidia Tegra 2s Cortex-A9s with non-vector floating point units.[17] It also uses a dual-channel LPDDR2 memory controller compared to Nvidia Tegra 2s single-channel memory controller.

These are marketed only to handset manufacturers. They are intended to be highly integrated, low cost chips for consumer products. The OMAP-DM series are intended to be used as digital media coprocessors for mobile devices with high megapixel digital still and video cameras.

These are marketed only to handset manufacturers. Many of the newer versions are highly integrated for use in very low cost cell phones.

The OMAP L-1x parts are marketed only through catalog channels, and have a different technological heritage than the other OMAP parts. Rather than deriving directly from cell phone product lines, they grew from the video-oriented DaVinci product line by removing the video-specific features while using upgraded DaVinci peripherals. A notable feature is use of a floating point DSP, instead of the more customary fixed point one.

OMAP SoCs are also used as the basis for a number of hobbyist and prototyping boards, such as the Beagle Board and Panda Board.