King Edward VII School (KE7) was an LEA maintained 11-19 comprehensive secondary school in Melton Mowbray, Leicestershire in the United Kingdom which closed in 2011. The school is situated on a 56-acre (230,000 m2) green field site on the edge of Melton Mowbray. Formerly, the school was a public grammar school. A third phase specialist technology college, Microsoft Partner School, CISCO Academy and training college, the school received a range of awards for its work.

The school was one of the first in the country to offer DiDA as a course, being one of the pilot schools for the qualification[citation needed] 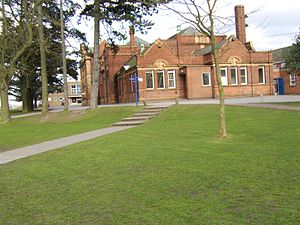 King Edward VII School is located on Burton Road within the town. Because the campus was originally two separate schools (the grammar school and Sarson high school), there are two main entrances to the school. The south entrance now gives access to the Melton Rugby Club and King Edward VII Sports centre located on campus, following the demolition of the Sarson High School buildings. King Edward VII was established in 1910 and some of its original buildings still remain. Around the original core, however, a range of modern blocks have developed. The site now also incorporates a special school, which opened in September 2004.

In June 1909 the first head-teacher, Dr Fred Hodson was appointed; 93 applications had been received for the position. The School was christened the Country Grammar School of King Edward VII. The school's royal authorisation to use the name was challenged, but before proof could be obtained the King died. It took an intervention from MP's before the Board of Education finally confirmed the new King had agreed the use of his father's name. On 13th April 1910 Thomas Cope, Chairman of Leicestershire County Council and Education Committee, was presented with a key to the school by its architect, Mr Shelbourn. Mr Cope was somewhat of a key collector due to all the new schools at the time. The first sports day took place on 20th June 1912. School houses were introduced earlier that year: Belvoir - blue, Cottesmore - red, and Quorn - yellow. Popular events included pillow fights, needle-threading, skipping races and bean bag races. In 1914 the first Old Pupils' Association was started with Bob Spikes, the school's first head boy as secretary. In 1931 plans for large extensions and rebuilding were discussed. In 1936 the building of the new assembly hall began, while the old domestic science block was replaced with a two story block, which were finally opened on 25 November 1937. In the 1940's the Old Grammarians' started a memorial fund to build a pavilion for the school in memory of those who had died during the two world wars; it was opened on 24 July 1954. During 1958 two new buildings were built to the east of the original school. One of which was shared with the Boys Modern School. The Leicestershire Plan in 1959 brought about a radical change in secondary schools in the Melton area. During this the County Grammar School was renamed King Edward VII Upper School. Under the plan the Boy's Modern School and the Sarson Girls School were phased out and replaced by three co-educational feeder schools. The School campus continued to grow. In 1975 a new six form block was opened, and a new sports hall was built. The all weather pitch and the music centre were opened in 1991, followed by the Community Sports Centre in February 1996. In June 1997 King Edward VII School gained Technology College Status. This set to work the major project of creating an Independent Learning Centre (Iliad) and improving the design facilities. The Iliad centre was opened in January 1998. On Tuesday 9th March 2010 the County Council Cabinet agreed to the proposal to close King Edward VII School in September 2011, as they predict falling pupil numbers will make it unsustainable.

The school is regarded as a national and international leader in the use of ICT with networked hubs in each subject area, video conferencing facilities, and extensive wireless networking for laptops. Over summer 2004 the school completely replaced its ICT infrastructure and now has over 500 computers, providing a computer ratio of 1:4 for students and laptops for all teaching staff.

CISCO Award for Innovative use of ICT and British Council International School Award in 2003. The school was an Enterprise Pathfinder. Designated as a Training School in 2004. The school is an Investor in People. Regional Training Award 2003. SSAT Research and Development hub. Sportsmark and Artsmark accreditation.