Dissolution of the Netherlands Antilles

Dissolution of the Netherlands Antilles 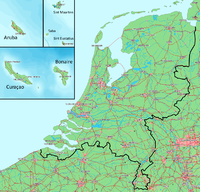 The idea of the Netherlands Antilles as a country within the Kingdom never enjoyed the full support of all islands and political relations between islands were often strained. Geographically, the Leeward Islands of Aruba, Curaçao, and Bonaire, and the Windward Islands of Saba, Sint Eustatius and Sint Maarten lie almost 1,000 kilometres apart. Culturally, the Leeward islands have deep connections with the South American mainland, especially Venezuela, and its population speaks a Spanish-Portuguese creole language called Papiamento. The Windward islands, on the other hand, are part of the English-speaking Caribbean.

Increasing unrest on Aruba, however, especially after a consultative referendum on secession was organized by the island government in 1977, meant that the issue of Aruban secession had to be taken into consideration. After long negotiations, it was agreed that Aruba could become a separate country within Kingdom of the Netherlands in 1986, but only on the condition that it would become fully independent in 1996. The People's Electoral Movement, which led the Aruban island government in the years leading up to 1986, reluctantly agreed to this, but the Aruban People's Party, which came to power after 1986, refused all cooperation with the Netherlands on the issue of independence.[4]

The Netherlands, on the other hand, became more and more aware that the ties with the Caribbean parts of the Kingdom would probably endure for a longer period of time. Suriname, the other partner of the Kingdom which attained independence in 1975, had gone through a period of dictatorship and civil war, which weakened the pro-independence ideology of the Dutch government. Aruba and the Netherlands agreed in July 1990 to delete Article 62, which foresaw Aruban independence in 1996, from the Charter. This was finalized in 1994, on some conditions about cooperation in the field of justice, good governance, and finances.[5]

Meanwhile, the permanent position of Aruba as a separate country within the Kingdom led to calls for a similar arrangement on the other islands, especially on Sint Maarten. In the early 1990s, the five remaining islands of the Netherlands Antilles entered into a period of reflection about whether or not to remain part of the Netherlands Antilles. In March 1990, Dutch Minister of Aruban and Antillean Affairs Ernst Hirsch Ballin came up with a draft for a new Kingdom Charter, in which the leeward islands Curaçao and Bonaire, and the windwards islands Saba, Sint Eustatius and Sint Maarten would form two new countries within the Kingdom. This proposal met with mixed responses on the islands.[6]

After a committee was installed investigating the future of the Netherlands Antilles, a Conference on the Future—Toekomstconferentie in Dutch, the Dutch government resisted using the more loaded term "Round Table Conference"—was held in 1993. The Netherlands proposed to take over the federal tasks of the Netherlands Antilles, with each of the islands thus remaining autonomous to the extent granted by the Islands Regulation of the Netherlands Antilles. Curaçao would be exempted and would attain country status like Aruba. Bonaire and Sint Maarten would be supported to help attain country status in the future. Saba and Sint Eustatius would not have this perspective and would remain what was called "Kingdom islands".[7] The fact that the Kingdom affairs would also be broadened to include law enforcement to reduce international crime (thus reducing the autonomy of Aruba and Curaçao), and the fact that Sint Maarten would not attain country status right away, meant that the Conference on the Future could only result in a failure.[8]

These agreements were worked out in the following year. At a Mini Round Table held on 11 October 2006, a closing agreement (Dutch: slotakkoord) was signed, which stated that Bonaire, Saba and Sint Eustatius would become public bodies of the Netherlands. A closing agreement was reached with Curaçao and Sint Maarten as well on 2 November. These agreement included specifics on the workings of the Board for Financial Supervision.

The closing agreements were subsequently ratified by the Netherlands and the individual islands, except by Curaçao, which rejected it on 29 November 2006. The other parties decided to continue negotiating without Curaçao. A transitional agreement was reached on 12 February 2007, which aimed at 15 December 2008, Koninkrijksdag, as the date of dissolution.

15 December 2008 turned out to be an unfeasible date for dissolution. Instead a Round Table Conference was held on that day, in which the agreements were once again put on paper. In October 2009, it was agreed that the dissolution would take place on 10 October 2010, and on 9 September 2010, a closing Round Table was organized in which the Act of Parliament amending the Charter was ceremonially signed by the parties.

Curaçao and Sint Maarten became two new constituent states within the Kingdom of the Netherlands, along the lines of Aruba and the Netherlands. Their planned new joint currency is the Caribbean guilder, to be brought in by 2012.[citation needed]

Bonaire, Saba and Sint Eustatius have become a direct part of the Netherlands as special municipalities (bijzondere gemeenten), a form of "public body" (openbaar lichaam) as outlined in article 134 of the Dutch Constitution.[11] The Dutch province of North Holland invited the three new municipalities to become part of the province.[12] Currently (as of March 2011), they are not part of any province.[citation needed]

These municipalities resemble ordinary Dutch municipalities in most ways (they have a mayor, aldermen and a municipal council, for example) and will have to introduce most Dutch law. Residents of these three islands will also be able to vote in Dutch national and European elections. There are, however, some derogations for these islands. Social security, for example, is not on the same level as it is in the Netherlands.[citation needed]

The three islands will also have to involve the Dutch Minister of Foreign Affairs before they can make agreements with countries in the region. The special municipalities would be represented in the Kingdom Government by the Netherlands, as they can vote for the Dutch parliament.

On 1 January 2011, the three islands switched to the US dollar rather than the euro that is used in the European Netherlands.

All five of the island territories may also continue to access the Common Court of Justice of Aruba, Curaçao, Sint Maarten, and of Bonaire, Sint Eustatius and Saba.

Status in the European Union

The Kingdom of the Netherlands is a member of the European Union. However the Netherlands Antilles and Aruba, a separate autonomous part of the Kingdom, are not considered part of the EU, but rather have the status of overseas countries and territories (OCTs). However, only one type of citizenship exists within the Kingdom (Dutch), and all Dutch citizens are EU citizens.

The Netherlands secured a provision in the Treaty of Lisbon that says that any Caribbean part of the Netherlands can opt for a change of status to Outermost Region (OMR) if they so wish, without having to change the Treaties of the European Union.[14]

On 1 September 2009, Saba announced that it wished to withdraw from the Netherlands Antilles immediately, rather than wait until October 2010.[15] However, according to Dutch State Secretary Bijleveld for Kingdom Relations, it was not legally possible for Saba to become separate from the Antilles earlier.[16]

The Kingdom Act amending the Charter for the Kingdom of the Netherlands was drafted on 20 January 2009. It consists of six articles, with the changes to the Charter being included in articles one to three. The Kingdom law provides for article 3 to take effect on the date of publication of the law in the official journal of the Netherlands, and articles 1 and 2 at a later date to be specified by royal decree. In this way the future countries of Sint Maarten and Curaçao will be able to draft their constitutions and fundamental legislation before the new relations within the Kingdom are to take effect.[17]

Legislation for the integration of Bonaire, Saba and Sint Eustatius into the Netherlands