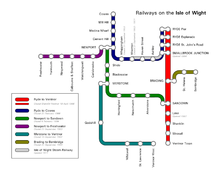 The Isle of Wight Central Railway (IWCR) was a railway company on the Isle of Wight, United Kingdom. At its peak the company owned 21½ miles of railway line, and it also operated trains on some additional lines it did not own. Trains were first run on what became its lines in 1862, although the company was not formally created until 1887. The IWCR was merged into the Southern Railway in 1923, and over the next 43 years all its lines were closed. A heritage railway now occupies part of the network.

The first railway line to be built on the Isle of Wight was between Newport and Cowes. The Cowes & Newport Railway Company formed by Act of Parliament on 8 August 1859[1] and began construction of the line on 16 October. The line opened to passengers on 1 July 1862,[1] with the first Cowes-Newport journey taking under 10 minutes, while the full return trip took less than 30 minutes.[2]

The Ryde & Newport Railway was authorised by Parliament on 25 July[citation needed] 1872 and opened for trains in December 1875. The company was managed by the Cowes & Newport company.[2]

The Isle of Wight (Newport Junction) Railway (IW(NJ)R) was formed on 31 July 1868[3] to construct a line between Sandown and Newport, but it was not until 1875 that any trains were running, and the line was not fully completed until 1879. The company entered into receivership just one year later, in 1880. At this point, the line was bought by the Cowes & Newport company.[2]

The Isle of Wight Central Railway (IWCR) came into being by Act of Parliament on 1 July 1887.[citation needed] Due to this, the three railway companies owned by the Cowes & Newport were legally amalgamated.

In addition the following two railways were managed and/or worked by the IWCR: 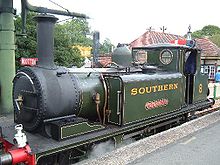 A1 Class 'Terrier' locomotive "Freshwater" in Southern Railway livery at the Isle of Wight Steam Railway. This locomotive was originally used on the FYN.

Between 1898 and 1905, the railway purchased 4 London, Brighton and South Coast Railway class A1 "Terrier" locomotives to operate its trains. One of these had been sent by the LBSCR to the Paris Exhibition of 1878, where she won a gold medal. In 1901, this locomotive was bought by the IWCR and was numbered 11, then brought to the island on 8 January 1902. This locomotive is preserved at the Isle of Wight Steam Railway.[7]

Under the Grouping Act the new Southern Railway took over all railways on the Isle of Wight in 1923. Developments under the SR included the construction of a short freight-only branch from the Cowes and Newport line to Medina Wharf. The Southern ran trains across the whole network, including through services to/from the former Isle of Wight Railway's east coast route and the FYN, in particular the island's only named train The Tourist, which ran from Ventnor through to Sandown, Newport and Freshwater.[4]

British Railways closed the FYN, IW(NJ)R and NGStLR in the 1950s, and remaining IWCR lines in 1966.

A 1914 Railway Clearing House map of lines around The Isle of Wight, showing Isle of Wight Central Railway owned lines.

The increasing population of the Isle of Wight and increasing traffic on its small roads has led to repeated discussion of whether it would be viable to reopen the Ryde & Newport and Cowes & Newport lines. Newport now has 24,000 inhabitants. Cowes has 17,000 and also handles busy ferry traffic to and from Southampton. Road and property developments now cover part of the line through Newport. This has led the island's local council to consider the possibility of a tramway rather than a statutory railway.