In the year 2007 there are two different systems valid in the Czech Republic of the vehicle registration plates.

The new Czech vehicle registration plate system was introduced in 2001. The first letter from the left represents the region - (Kraj) and then follows a combination of letters or numbers numbered upward from 1X0 0001 - where X is the letter of region. In 2009, both Prague (A) and Středočeský kraj/Central Bohemia (S) reached the combination of six 9s in their license plates and started issuing a two letter format numbered 1XA 0000, where X is the letter of region and A is a letter in alphabetical order (after 1AA 9999, 1AB 0000 follows).

Since 2004 with the accession of the Czech Republic to the European Union, a blue European strip with the letters CZ and European stars were added. 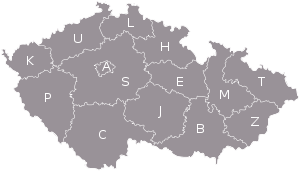 Map of the Czech Republic with regions.

Czechoslovak registration from 70s still valid in the Czech Republic

This system was introduced in Czechoslovakia in 1960. After the dissolution of Czechoslovakia, Slovak Republic introduced a new system of car registration plates in 1997 while the Czech Republic kept issuing the old one until 2001. In the old system, the two first letters represented the district (okres). Registrations in Prague began with A, while the vehicles used by the government had registration plates beginning with AA.

Until 2001 diplomatic plates in Czechia had, as well as cars owned by foreign residents, a blue background with yellow letters. They were replaced by blue letters on a white background.