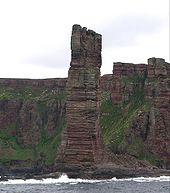 The Old Man of Hoy viewed from the MV Hamnavoe

The Old Man of Hoy is a 449 feet (137 m) sea stack of red sandstone perched on a plinth of igneous basalt rock, close to Rackwick Bay on the west coast of the island of Hoy, in the Orkney Islands, Scotland. It is a distinctive landmark seen from the Thurso to Stromness ferry, MV Hamnavoe, and is a famous rock climb. It is close to another famous site, The Dwarfie Stane. 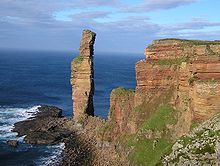 The Old Man of Hoy, seen from the south

The Old Man is probably less than 400 years old and may not get much older, as there are indications that it may soon collapse.[1] On maps drawn between 1600 and 1750 the area appears as a headland with no sea stack. William Daniell, a landscape painter, sketched the sea stack in 1817 as a wider column with a smaller top section and an arch at the base, from which it derived its name.[2] A print of this drawing is still available in local museums. Sometime in the early 19th century, a storm washed away one of the legs leaving it much as it is today, although erosion continues. 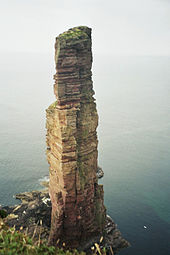 The Old Man of Hoy

The stack was first climbed in 1966 by Chris Bonington, Rusty Baillie and Tom Patey over a period of three days. On 8–9 July 1967 an ascent featured in a live BBC three-night outside broadcast, which had around 15 million viewers.[3] This featured three pairs of climbers: Bonington and Patey repeated their original route, whilst two new lines were climbed, by Joe Brown and Ian McNaught-Davis, and by Pete Crew and Dougal Haston.

The stack has a number of climbing routes (one route being at the British grade of E6), but the vast majority of ascents, of which there are 20–50 in an average year, are by the original and easiest route at E1 (5b). A small RAF log book in a Tupperware container is buried in a cairn on the summit, as an ascensionists' record.

Evidence from the original 1960s ascents is still present on the stack, in the form of a collection of wooden wedges hammered into the vertical corner crack of the second pitch. The belays consist of natural threads and wedged ironmongery, including (in 1994) a snow 'deadman' anchor forced into a crack. Some parties choose to divide the second (5b) pitch into two, bringing the second around to the base of the overhanging crack to belay from a hanging stance to keep the remainder of the pitch 'straight'. Care must be taken on the descent abseil at this point as it is fairly easy to jam the ropes on retrieval - and a stash of abandoned ropes cut from the stack bears testimony to this.

On the morning of 16 May 2008 it was announced on BBC Radio Orkney that the first BASE jump had been performed off the top by Roger Holmes, Gus Hutchinson-Brown and Tim Emmett. The jump took over three years of planning.[4] A video of the jump is on YouTube [2]. Hutchinson-Brown died a month later during a jump in Switzerland.[5]

The Old Man appears in the "Trailer sketch" of the Monty Python's Flying Circus episode "Archaeology Today" in which the voiceover (Eric Idle) says that singer Lulu climbs the Old Man. It also appears in the opening scene of the video of the Eurythmics' 1984 hit song "Here Comes the Rain Again".