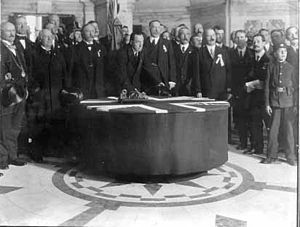 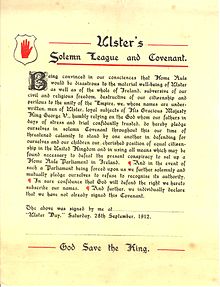 The Ulster Covenant was signed by just under half a million of men and women from Ulster, on and before September 28, 1912, in protest against the Third Home Rule Bill, introduced by the Government in that same year. Sir Edward Carson was the first person to sign the Covenant at the Belfast City Hall with a silver pen[1] destined for immortality followed by Lord Londonderry, representatives of the Protestant Churches, and then by Sir James Craig. The signatories, 471,414 in all,[2] were all against the establishment of a Home Rule parliament in Dublin. The Ulster Covenant is immortalised in Rudyard Kipling's poem "Ulster 1912".

A British Covenant, similar to the Ulster Covenant in opposition to the Home Rule Bill, received two million signatures in 1914.

The Covenant (for men)

BEING CONVINCED in our consciences that Home Rule would be disastrous to the material well-being of Ulster as well as of the whole of Ireland, subversive of our civil and religious freedom, destructive of our citizenship, and perilous to the unity of the Empire, we, whose names are underwritten, men of Ulster, loyal subjects of His Gracious Majesty King George V., humbly relying on the God whom our fathers in days of stress and trial confidently trusted, do hereby pledge ourselves in solemn Covenant, throughout this our time of threatened calamity, to stand by one another in defending, for ourselves and our children, our cherished position of equal citizenship in the United Kingdom, and in using all means which may be found necessary to defeat the present conspiracy to set up a Home Rule Parliament in Ireland. And in the event of such a Parliament being forced upon us, we further solemnly and mutually pledge ourselves to refuse to recognize its authority. In sure confidence that God will defend the right, we hereto subscribe our names.
And further, we individually declare that we have not already signed this Covenant.

The Declaration (for women)

We, whose names are underwritten, women of Ulster, and loyal subjects of our gracious King, being firmly persuaded that Home Rule would be disastrous to our Country, desire to associate ourselves with the men of Ulster in their uncompromising opposition to the Home Rule Bill now before Parliament, whereby it is proposed to drive Ulster out of her cherished place in the Constitution of the United Kingdom, and to place her under the domination and control of a Parliament in Ireland.
Praying that from this calamity God will save Ireland, we here to subscribe our names.

Their webs shall not become garments,
neither shall they cover themselves with their works:
their works are works of iniquity
and the act of violence is in their hands
(Isaiah lix. 6).

The dark eleventh hour
Draws on and sees us sold
To every evil power
We fought against of old.
Rebellion, rapine, hate,
Oppression, wrong and greed
Are loosed to rule our fate,
By England’s act and deed.

The Faith in which we stand,
The laws we made and guard,
Our honour, lives, and land
Are given for reward
To Murder done by night,
To Treason taught by day,
To folly, sloth, and spite,
And we are thrust away.

The blood our fathers spilt,
Our love, our toils, our pains,
Are counted us for guilt,
And only bind our chains.
Before an Empire’s eyes
The traitor claims his price.
What need of further lies?
We are the sacrifice.

We asked no more than leave
To reap where we had sown,
Through good and ill to cleave
To our own flag and throne.
Now England’s shot and steel
Beneath that flag must show
How loyal hearts should kneel
To England’s oldest foe.

We know the war prepared
On every peaceful home,
We know the hells declared
For such as serve not Rome—
The terror, threats, and bread
In market, hearth, and field—
We know, when all is said.
We perish if we yield.

As well "Ulster Covenant" the term "Solemn League and Covenant" was occasionally used. This recalled a key historic document signed in 1643, by which the Scottish Covenanters at that time made a political and military alliance with the leaders of the English Parliamentarians during the First English Civil War.

As highlighted in Ulster resistance and loyalist rebellion in the Empire, an essay by Donal Lowry, the Ulster Covenant was used as a template for the 'Natal Covenant', signed in 1955 by 33,000 British-descended Natalians against the nationalist South African government's intention of declaring the union a republic. It was signed in Durban City Hall—itself loosely based on Belfast's, so that the Ulster scene was almost exactly reproduced.[3]