The Union's activity started in the 1880s when a cycling club was formed. At the old University College Site in the city centre the 'RAG' started in 1923. The Gong Magazine (now Impact, having been Gongster and Bias at various points) initiated in 1939 was an early sign of developing Union life. In 1928 the expanding college moved to the new out-of town Highfields Estate and here the Union's first permanent residence was in the lower corridor of the Trent Building. By 1956, the Portland Building had been opened, and was originally designated as a Union building, but although the Union is the major user, the management of the building has always rested with the University.

In the 1960s, the Union rationalised its representative system into a series of guilds, mostly based on halls of residence as 'constituencies'. This systems worked well for over two decades, before a critical mass of students came to live outside halls, at which point the strong communities on which the Guild system was based lost their universality. During the 1970s the Union took on a more militant air, with sit-ins and student strikes. This did lead to some positive results, such as student representation of many University committees - an opportunity openly satirised by the 1980s as less of a revolutionary shift than expected. The pace of change in the Union accelerated after the Robbins Report, as rises in student numbers drove it towards a bigger capacity, more permanent staff and sabbatical officers, more rooms and offices and bigger turnovers and budgets. Income rose from £250,000 in 1982 to £1,480,000 in 2006. Membership rose by 23,000 in the same period, whilst staff numbers more than trebled. Recently, the Union has started to address a number of pressing challenges presented by the dynamism and growth of the University under Sir Colin Campbell - such as provision of Union services to members at East Midland sites beyond the main Nottingham campuses. 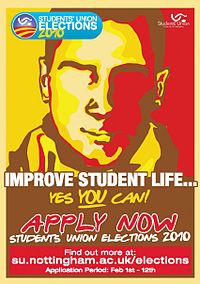 Elected student officers play a role in the governance of the students' union. This poster was used to advertise for candidates for the 2010 elections.

Students' Union Council is the highest regularly meeting decision-making body of the Students' Union.[12] It meets around eight times per year. For Council to make any binding decisions it has to be quorate; the quorum for Students' Union Council is set at 50% of voting members of Council. Members of Students' Union Council can be either voting or non-voting members. The voting members are designed to be representative of the membership of the Students' Union as a whole. Most non-voting members sit on Council to represent various views that it is felt important to have represented at this level, but where they do not represent a clear constituency of students; each Student-Run Service, for example, has a non-voting seat on Council, since it is felt that there will be issues that it useful to have their input on, but that those involved in their organisation are already represented through a Council Rep.The Constituencies for Voting Members of Students' Union Council are, for the most part either residential or subject-based. Generally, first year undergraduates are grouped into constituencies determined by their residence (e.g. Hall of Residence)., with students in subsequent years represented through their subject or faculty.The remaining Council positions are held by the Executive Officers, JCR and Association Heads, and Student-Run Service Heads. In 2011 democratic reforms were announced that would in effect abolish Council and replace it with a new democratic structures.[13] The previous democratic structures had only been quorate 15% of the time in the past 10 years and it was widely felt that they were inaccessible.

As of January 2011 there are currently 9 positions on the Students' Union Executive Committee: 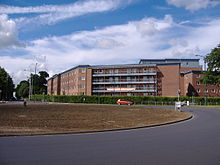 Broadgate Park (pictured) has a residential Association which represents over 2000 people.
Further information: University of Nottingham Halls of Residence

More commonly called JCRs (Junior Common Room) these committees are elected from students in halls to put on social events throughout the year.[17] There is also a Regional Students Association for students who are not living in halls.[18] There is a President's Committee ('Pres Com') where Presidents of halls can share best practice. The JCRs are supported by a member of staff called the JCR Development Worker. There are currently 20 Residential Association committees: 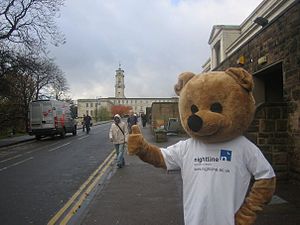 The Student-Run Services are set apart from societies since they exist for the benefit of the wider student body. Each Student-Run Service is run by an elected student committee. As of January 2011 there are 9 Student Run Services. Summer Party was dissolved as an SRS after making a substantial loss in 2010.[46] Forum, a public speaker series was dissolved as a student run service but was relaunched (though not as an SRS) in 2010.[47]

The University of Nottingham Students' Union has one of the largest ranges of student societies and volunteering opportunities in the UK. There are nearly 200 societies that cover a wide range of interests from bell-ringing to chess to gliding.[52] There are also extensive local and international volunteering opportunities at the Students' Union, notably the InterVol project which works in Uganda on health and sanitation, Golden Futures which works to support children in Cambodia as well as local initiatives to support the British Red Cross and Oxfam.[53]

There are over 70 sporting clubs affiliated to the Students' Union, which fall under the Athletic Union.The Athletic Union competes at the highest standard within university sport, finishing 5th in BUSA in 2007, and on course to do the same in 2008. It contains numerous international competitors, and the plays at some excellent facilities which are run by the department of sports & physical recreation.As well as the Sports Clubs, the Athletic Union also runs one of the largest Intramural sporting programmes in the country with hundreds of teams competing each week in 6 sports: Rugby, Football, Hockey, Basketball, Tennis and Netball. The winners of each sport then compete in our annual intramural varsity match against Loughborough university. Held annually, the Varsity Series is a series of sports matches against Nottingham Trent University over the Spring term in ten different disciplines: rugby union (men's and women's), hockey (men's and women's), basketball (men's and women's), football (men's and women's), ice hockey (men's), Netball (women's), cricket (men's), swimming (men's and women's combined) and rugby league (men's). This is one of the best attended series in the UK, with over 6,000 watching the ice hockey, and 3,500 watching the football and rugby. The games are held at the top sporting venues in Nottingham; both the football and rugby at Meadow Lane (home of Notts County), and the ice hockey at the National Ice Arena. There are over 70 AU clubs.

The Education Network exists to represent students on issues relating to their education while at University. The Network is chaired by the Education Officer.[54] There

The Students' Union has run a number of campaigns over the years on a wide range of subjects affecting students. These include B-EAT aimed at helping those with eating disorders[55] and an Exam Stress campaign aimed at helping students get through the exam period.[56] Around January when students begin to consider housing options for the next year a campaign is run to help students look for housing.[57] The Student Advice and Representation Centre are also available to check housing contracts free of charge.

Each year a campaign run to coincide with Week One, to promote safe sex amongst freshers arriving at university. The campaign previously also promoted alcohol awareness, but in 2011/2012 Easy Tiger was stripped unceremoniously of this duty. The campaign mascot is a person in tiger suit; the tiger itself often has helpers with tiger facepaints.[58]

Your Hall! Your Call!

In 2011 the Students' Union ran a campaign called 'Your Hall! Your Call!' aimed at protesting cuts to the number of wardens and the number of tutors in halls which it was argued would be detrimental to the welfare of students living in halls.[59] Over 3000 students signed a petition against the cuts.[60] The campaign succeeded in its demand for student consultation over the proposed changes.[61]

In 2011 a campaign was launched to protest against HMO legislation being planned by Nottingham City Council which would require planning permission to be obtained in order to convert houses into HMOs (House of Multiple Occupancy).[62]

In 2011 a campaign was run against proposals by Nottingham City Council to introduce parking permits for students which would not apply to residents who were not students.

There are currently three levels of awards granted by the Students' Union to graduating students:

The Students' Union makes the following awards to non-students:

The Students' Union Constitution lays down certain rights of its members (including Honorary Members):

(Further rights, such as the ability to stand and vote in Students' Union Elections, are reserved for "Full Members" - those registered as students at the University).In recent years typically five to eight new Honorary Life Members have been created in any year. With typically thirty recipients each year (from a graduating class numbering around 8000) the Union Prize is presented to graduating students of the University of Nottingham in recognition of their contribution to the benefit of the students.