University of Nottingham Halls of Residence 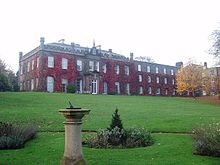 This is a list of halls of residence on the various campuses of the University of Nottingham in Nottingham, England.

The University of Nottingham has a particularly well developed system of halls located on its campus. The halls acts a microcosms of the university at large and provide a community-level forum for the interaction of undergraduates, postgraduates and senior academics.

The halls are generally named either after counties, districts, or places in the English East Midlands (Nottingham having been originally conceived as a regional university for this area) or significant people associated with the university. Lenton, Lincoln, Derby, Rutland, Sherwood, Newark, Southwell, Ancaster and Melton halls fall into the former category, Hugh Stewart, Cripps, Cavendish, Nightingale, Florence Boot, Wortley, and Willoughby into the latter.

All halls of residence on University Park Campus are of mixed sex undergraduate type. 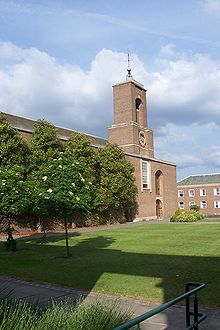 Cripps Hall (52°56′31″N 1°11′44″W﻿ / ﻿52.9419°N 1.1955°W﻿ / 52.9419; -1.1955) provides accommodation for just over 300 students. The hall is named after its benefactor, Sir Cyril Cripps. It opened in 1959, and was originally all male, but has been mixed sex since 2000. Cripps Hall was designed by the architects Donald McMorran and George Whitby, and is a grade II listed building (one of only relatively few post-war buildings to be given such status). Cripps Hall has a perennial rivalry with its neighbour, Hugh Stewart Hall. Cripps Hall is the only hall on campus to have its own gym and has won the intramural sports competition for the past three years. The current warden is Dr Gethin Roberts.[3] 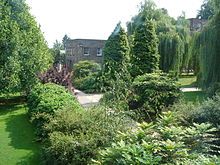 Hugh Stewart Hall (52°56′26″N 1°11′45″W﻿ / ﻿52.9405°N 1.1957°W﻿ / 52.9405; -1.1957) (often referred to as Hu Stu) is the largest hall on University Park Campus (the third largest at the University), providing accommodation for around 347 students. The hall is named after Hugh Stewart (1884–1934) who was Principal of University College Nottingham from 1929 until his death. Until 2000 the hall was all male. The oldest part of Hugh Stewart Hall was originally called Lenton Hall, and was built in about 1792 by the architect William Stretton, as a home for Nottingham banker and owner of the Butterley Company, John Wright. The hall was extended in 1937, at which time it was renamed Hugh Stewart. It was extended again in 1969. The Hall's Warden is Ms Stacy Johnson of the School of Nursing who, in September 2005 took over from archaeologist Dr Jon Henderson after he unexpectedly had to resign due to academic commitments, having being warden for only a year. He was preceded by Dr. Don Rees who had been Warden of the hall for 29 years, and after whom the hall library is named.[6]

Lenton and Wortley Hall (52°56′36″N 1°11′55″W﻿ / ﻿52.9432°N 1.1986°W﻿ / 52.9432; -1.1986) is a mixed undergraduate hall of residence. It provides accommodation for just over 300 students, making it the third largest hall on campus. The hall results from the amalgamation of two previous halls of residence, New Lenton Hall and Wortley Hall, named after the local district of Lenton, and Professor Harry Almond Saville Wortley, Principal of University College Nottingham from 1935 to 1947, as well as Lenton Hurst. The Hall is home to one of the four "Mix" cafe-bars on campus. Between 1980 and 2006, the Warden was Mr William Hooker. The current warden is Professor Glenn McDowell, who was previously warden of Nightingale Hall. It includes Wortley House, a modern, three storey block consisting of 60 en-suite rooms, along with Lenton Hurst, a four storey house consisting only rooms with double beds. Situated just behind it is a bus stop which has destinations of the town centre and further out.[7]

The Hall was designed by the Nottingham architect F.E. Wooley and opened in 1962; until 1997 it was an all male hall. The buildings overlook parkland at the rear and form two main courts. The rectangular lower court consists of 12 self-contained accommodation blocks, each named after places found in the county of Lincolnshire. Accommodation is the form of single study rooms, some shared study rooms and others which have private bathrooms between two study rooms. The upper court features the dining hall, the Coveney Library, the Senior Common Room and the gatehouse, all enclosing a circular lawn. Two gilded herons, the Hall's emblem, adorn the wrought iron gates leading to the park. [9] 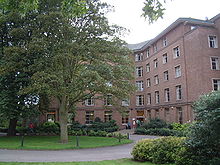 Nightingale Hall (52°56′15″N 1°12′24″W﻿ / ﻿52.9374°N 1.2067°W﻿ / 52.9374; -1.2067) is the smallest hall of residence on campus with accommodation for 150 students. The hall opened in 1950, and was refurbished in 1998 and again in 2007. It is named after the nursing pioneer Florence Nightingale, and originally stored the university's collection of documents and memorabilia associated with her, although this is now stored in the Hallward Library and the Florence Nightingale Museum in Southwark, London. Until 2000 the hall was all female, but it is now mixed. The Hall was one of the first to offer students 'large study bedroom' accommodation in September 2007 in which the rooms are fitted with three-quarter sized beds, and a mini fridge. The present warden is Professor Jan Bradley.[10] 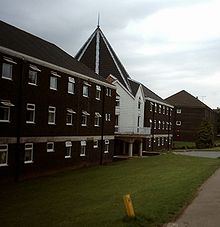 Sherwood Hall was designed as an interpretation of the traditional collegiate quadrangle, but using contemporary forms and materials. A distinctive feature is the white painted shiplap weatherboarding, which gives the hall something of a North American feel. As originally built, the hall had a single quadrangle of accommodation blocks, with a further accommodation block and the main hall and library forming a second, but open-ended, court. Subsequent extensions have transformed this into a second quadrangle. For the first twenty-two years of its life, the warden was the late W. R. "Bunny" Chalmers. As of 2006[update] the current Warden is Dr. Antonino La Rocca.[12] 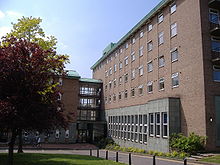 Melton Hall is the University's only postgraduate hall of residence, and is named after the local town of Melton. It provides accommodation for 149 students, and along with the rest of the first stage of the campus, was designed by Sir Michael Hopkins. The hall is self-catered, with each kitchen shared by up to thirteen students. Administration is provided by Southwell Hall. All rooms are en-suite. Melton Hall has two common rooms and one study room.

Newark Hall is an undergraduate hall of residence named after the local town of Newark, sharing its coat of arms and motto "Deo Fretus Erumpe" ("Trust in God and Sally Forth"). Housing about 400 students, this makes it the second largest hall of residence in the University (after Bonington Hall). As the rest of the campus, it was designed by Sir Michael Hopkins in the shape of an eight framing two quads surrounded by the building. 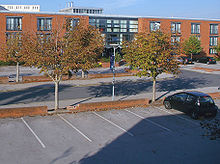 Southwell Hall is an undergraduate hall of residence named after the local town of Southwell. It houses about 200 students, and along with the rest of the first stage of the campus, was designed by Sir Michael Hopkins. The administrative team also cover Melton Hall. 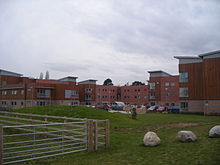 Stanford, Barton and Zouch were built in 2006

Bonington Halls is the name given by the university to the student accommodation (halls of residence) at Sutton Bonington Campus. It is owned by Opal Property Group. It is a mixed sex hall holding both undergraduates and postgraduates. In reality, it is not really a single hall, but a number of small separate "halls" and "houses" of varying age and design, holding between eight and sixty people, in addition to a shared dining room, laundry and bar. Bonington Halls house approximately 650 students. This makes it the university's largest hall of residence (regaining the title from Jubilee's Newark hall). The halls have a single JCR committee, but this operates more along the lines of the entertainment committee of the Student Guild as it arranges activities for both the residents of Bonington Halls and those students studying at Sutton Bonington but living off campus. The houses and halls at Sutton Bonington are named after local villages and are as follows: 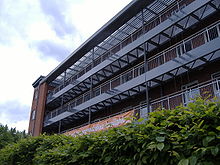 University Hall was a hall-grouping to which all off-campus students belonged in the days before such a group became so large that it was meaningless to attempt to make it conform with the halls system. The hall was dissolved in the 1990s.

Wortley Hall was a hall named after the last Principal of University College Nottingham, Harry Wortley. It was located in the extreme north of University Park in Lenton Firs House. The hall was subsumed by New Lenton Hall in the 1980s, with the School of Architecture (now the School of the Built Environment) taking over the occupation of Lenton Firs.