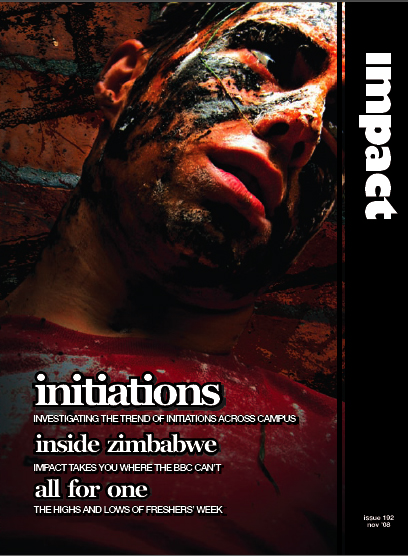 Impact Magazine is the official student magazine of the .

; Contents and editorial : A single contents page is followed by a page containing the "Letter of the Month" and an editorial, which is written by the magazine's Editor-in-Chief, Editor and Deputy Editor.; News : Usually 4 to 5 pages, this section covers a range of student-related issues, split into three categories: "On Campus", "Local" and "National". There is also "The Debate" at the end of the News section, where a particularly controversial issue is discussed, with two opposing views are given in addition to a summary.; Sport : Typically 2 or 3 pages, this covers a range of national and campus sports.; Features : This is the main part of the magazine, spanning between 12 and 14 pages. It contains articles on a variety of student-related topics, usually with a headlining piece of 3 to 4 pages, with other 1 and 2 page articles throughout the rest of the section.; Grapevine : This is a 2 page events summary outlining student activities for the month.; Travel : A 2 page section, typically with 3 or 4 articles about destinations and travel experiences around the world.; Style : Usually 4 pages, Style contains a photo shoot and a small article.; Spare Parts : A 2 page section with recurring features such as "Our Man In...", "Impact's Guide To..." and "Vent Your Spleen".; Nice Arts : A 2 or 3 page section covering theatre, literature and the arts.; Nice Film : 2 or 3 pages of articles and reviews of film and DVD releases.; Nice Music : A 4 page section containing reviews and typically an interview with a band.; Nice Science : A 2 page section with a variety of science and technology coverage.; Nice Nights : 2 or 3 pages of nightlife and entertainment articles and reviews.; Nice Gratis : A page of competitions and magazine credits.; Famous Last Words : A single page interview with a celebrity. Recent interviewees have included [Citation | title=Impact Magazine issue 186 | issue=186 | date=December 2007] and [Citation | title=Impact Magazine issue 184 | issue=184 | date=September 2007] .

Past Editor In Chiefs