Microstates and the European Union

Microstates and the European Union 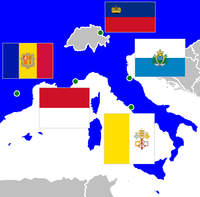 There are a number of microstates in Europe; due to their size, they are often closely linked with another larger state. Currently, the European microstates have special relations with the European Union.

They remain outside the Union, some due to the cost of membership, the EU not being designed with microstates in mind. Two other smaller countries in Europe, Luxembourg and Malta, are full members of the Union. Iceland is considered a microstate by some due to its small population;[1] it is a member of the European Economic Area (EEA), and has applied for membership in the EU (See: Accession of Iceland to the European Union).

San Marino, Monaco, and the Vatican City use the euro and have been granted the right to mint a limited number of euro coins. They were allowed to do so, having used or been tied to the old eurozone currencies, and all have open borders. Andorra also uses the euro and is currently in negotiations with the EU to be granted the right to mint its own coins. Liechtenstein on the other hand uses the Swiss franc.

All but Andorra are part of the Schengen Agreement or have an open border with the Union. San Marino and Andorra are in a customs union with the bloc. Liechtenstein is a member of the EEA so is within the EU internal market and applies certain EU laws. All of the microstates are also part of other organisations such as the Council of Europe and the Organisation for Security and Co-operation in Europe (the Vatican is member only of the OSCE).

This table summarises the various components of EU laws applied in the microstates. Some territories of EU member states also have a special status in regard to EU laws applied as is the case with some European Free Trade Association members and their sovereign territories.