The Kea (pronounced /ˈkeɪ.ə/; Māori: [kɛ.a]) (Nestor notabilis) is a large species of parrot (family Strigopidae) found in forested and alpine regions of the South Island of New Zealand. About 48 centimetres (19 in) long, it is mostly olive-green with a brilliant orange under its wings and has a large narrow curved grey-brown upper beak. The Kea is the world's only alpine parrot. Its omnivorous diet includes carrion[2] but consists mainly of roots, leaves, berries, nectar, and insects. Now uncommon, the Kea was once killed for bounty due to concerns by the sheep farming community that it attacked livestock, especially sheep.[3] It only received full protection in 1986.[4]

The Kea nests in burrows or crevices among the roots of trees. Kea are known for their intelligence and curiosity, both vital to their survival in a harsh mountain environment. Kea can solve logical puzzles, such as pushing and pulling things in a certain order to get to food, and will work together to achieve a certain objective.[5]

The Kea was described by ornithologist John Gould in 1856.[6] Its specific epithet, the Latin term notabilis, means "noteworthy".[7] The common name is from Māori, probably representing the screech of the bird.[8] The term Kea is both singular and plural.

The genus Nestor contains four species: the New Zealand Kaka (Nestor meridionalis), the Kea (N. notabilis), and the extinct Norfolk Kaka (N. productus) and Chatham Kaka (N. sp.). All four are thought to stem from a "proto-Kākā", dwelling in the forests of New Zealand five million years ago.[9][10] Their closest relative is the Kākāpō (Strigops habroptila).[9][10][11][12] Together, they form the parrot family Strigopidae, an ancient group that split off from all other Psittacidae before their radiation.[9][10][12][13]

A gathering or group of Kea is called a circus.[14] 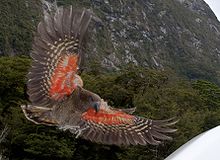 Orange feathers can be seen under the wing during flight

The Kea is a large parrot about 48 centimetres (19 in) long and weighing 0.8–1 kg (1.8–2.2 lb).[15] It has mostly olive-green plumage with a grey beak having a long narrow curved upper beak. The adult has dark-brown irises, and the cere, eyerings, and legs are grey. It has orange feathers on the undersides of its wings. The feathers on the sides of its face are dark olive-brown, feathers on its back and rump are orange-red, and some of the outer wing feathers are dull-blue. It has a short and broad bluish-green tail with a black tip. Feather shafts project at the tip of the tail and the undersides of the inner tail feathers have yellow-orange transverse stripes.[16] The male is about 5% longer than the female, and the male's upper beak is 12–14% longer than the female's.[17] Juveniles generally resemble adults, but have yellow eyerings and cere, an orange-yellow lower beak, and grey-yellow legs.[16] 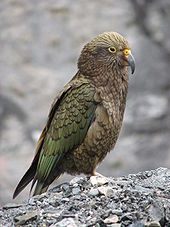 Juveniles have yellow eyerings and cere, an orange-yellow lower beak, and grey-yellow legs

Subadult Kea in its alpine habitat

The Kea ranges from lowland river valleys and coastal forests of the westcoast up to the alpine regions of the South Island such as Arthur's Pass and Aoraki/Mount Cook National Park, closely associated throughout its range with the southern beech (Nothofagus) forests in the alpine ridge. Apart from occasional vagrants, Kea are not found in the North Island, although fossil evidence suggests a population lived there over 10,000 years ago.[19]

The population was estimated at between 1,000 and 5,000 individuals in 1986,[20] contrasting with another estimate of 15,000 birds in 1992.[21] Both estimates depend heavily upon the assumptions made.[21] The Kea's widespread distribution at low density across inaccessible areas prevents accurate estimates.[22][23] 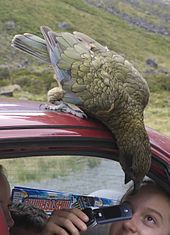 A Kea causing damage to a parked car

The Kea's notorious urge to explore and manipulate makes this bird a pest for residents and an attraction for tourists. Called "the clown of the mountains",[24] it will investigate backpacks, boots or even cars, often causing damage or flying off with smaller items.

People commonly encounter wild Kea at South Island ski areas. The Kea are attracted by the prospect of food scraps. Their curiosity leads them to peck and carry away unguarded items of clothing or to pry apart rubber parts of cars—to the entertainment and annoyance of human observers. They are often described as "cheeky". A Kea has even been reported to have made off with a Scottish man's passport while he was visiting Fiordland National Park.[25]

Feeding Kea has been shown to have a detrimental effect on the birds' health and well-being and is thought to contribute to their destructive behaviour.[26] The birds' trusting behaviour around humans has also been indicated as a contributing factor in a number of recent incidents at popular tourist spots where Kea have been purposely killed.[27][28]

Mortality is high among young Kea, with less than 40% surviving their first year.[29] The median lifespan of a wild subadult Kea has been estimated at 5 years, based on the proportion of Kea seen again in successive seasons in Arthur's Pass, and allowing for some emigration to surrounding areas. Around 10% of the local Kea population were expected to be over 20 years of age.[21] The oldest known captive Kea was 50 years old in 2008.[29] 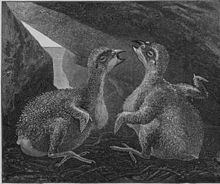 At least one observer has reported that the Kea is polygynous, with one male attached to multiple females. The same source noted that there was a surplus of females.[30]

Kea are social and live in groups of up to 13 birds.[31] Isolated individuals do badly in captivity but respond well to mirror images.[32]

In one study, nest sites occur at a density of 1 per 4.4 km².[23] The breeding areas are most commonly in Southern Beech (Nothofagus) forests, located on steep mountain sides. Breeding at heights of 1600 m above sea level and higher, it is one of the few parrot species in the world to regularly spend time above tree line. Nest sites are usually positioned on the ground underneath large beech trees, in rock crevices or dug burrows between roots. They are accessed by tunnels leading back 1 m to 6 m into a larger chamber, which is furnished with lichens, moss, ferns and rotting wood. The laying period starts in July and reaches into January.[33] Two to five white eggs are laid, with an incubation time of around 21 days, and a brooding period of 94 days.[34]

An omnivore, the Kea feeds on more than 40 plant species (Tab. 1), beetle larva, other birds (including shearwater chicks) and mammals (including sheep and rabbits).[5][31] It has been observed breaking open shearwater nests to feed on the chicks after hearing the chicks in their nests.[35] The Kea has also taken advantage of human garbage and "gifts" of food.[36] In captivity, the bird is fond of butter, nuts, apples, carrots, grapes, mangoes, figs, bread, dairy products, ground meat and pasta.[citation needed] 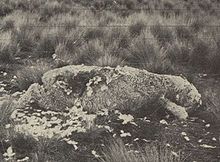 There was a long-running controversy about whether the Kea preys on sheep. Sheep suffering from unusual wounds on their sides or loin were noticed by the mid-1860s, within a decade of sheep farmers moving into the high country. Although some supposed the cause was a new disease, suspicion soon fell on the Kea. James MacDonald, head shepherd at Wanaka Station, witnessed a Kea attacking a sheep in 1868, and similar accounts were widespread.[2] Prominent members of the scientific community accepted that Kea attacked sheep, with Alfred Wallace citing this as an example of behavioural change in his 1889 book Darwinism. Despite substantial anecdotal evidence of these attacks,[2][37] however, others remained unconvinced, especially in later years. For instance, in 1962, animal specialist J.R. Jackson concluded that while the bird may attack sick or injured sheep, especially if it mistook them for dead, it was not a significant predator.[38] In 1993, however, its nocturnal assaults were captured on video,[5] proving that at least some Kea will attack and feed on healthy sheep. The video confirmed what many scientists had long suspected, that the Kea uses its powerful curved beak and claws to rip through the layer of wool and eat the fat from the back of the animal. Though the bird does not directly kill the sheep, death can result from blood poisoning or accidents suffered by animals trying to escape.

There were also anecdotal reports of Kea attacking rabbits, dogs, and even horses.[37]

The Kea has been observed feeding on the following plants:[31]

Together with local councils and runholders, the New Zealand government paid a bounty for Kea bills because the bird preyed upon livestock, mainly sheep.[37][39] It was intended that hunters would kill Kea only on the farms and council areas that paid the bounty, but some hunted them in national parks and in Westland, where they were officially protected. More than 150,000 were killed in the hundred years before 1970, when the bounty was lifted.[40] In the 1970s, the Kea received partial protection after a census counted only 5000 birds. The government agreed to investigate any reports of problem birds and have them removed from the land.[22] It was not until 1986 that it was given full protection under the Wildlife Act 1953.

A study of Kea numbers in Nelson Lakes National Park showed a substantial decline in the population between 1999 and 2009, caused primarily by predation of Kea eggs and chicks.[41] Video cameras set up to monitor Kea nests in South Westland have confirmed that possums do kill Kea fledglings.[42]

Lead poisoning (mostly from building materials) is also a significant cause of premature deaths among Kea.[43][44] Research on lead toxicity in Kea living at Aoraki/Mount Cook found that of 38 live Kea tested all were found to have detectable blood lead levels, 26 considered dangerously high.[44] Additional analysis of 15 dead Kea sent to Massey University for diagnostic pathology between 1991 and 1997 found nine to have lead blood levels consistent with causing death.[45] Research conducted by Victoria University in 2008 confirmed that the natural curiosity of Kea which has enabled the species to adapt to its extreme environment, may increase its propensity to poisoning through ingestion of lead – ie. the more investigative behaviours identified in a bird the higher its blood lead levels were likely to be.[46]

Toxins used to control invasive pest mammals such as stoats and possums have also been implicated in Kea deaths. For example, seven Kea were found dead following an aerial possum control operation at Fox Glacier in July 2008[47] and a further seven in August 2011, following an aerial possum control operation in Ōkārito Forest.[48] Traps are also considered a risk to Kea. In September 2011, hidden cameras caught Kea breaking into baited stoat traps in the Matukituki Valley. More than 75% of the traps had been sprung.[49]

Despite being classified as Nationally Endangered in the New Zealand Threat Classification System[50] and Vulnerable in the IUCN Red List and protected by law, Kea are still deliberately shot. For example, in the late 1990s, a Fox Glacier resident killed 33 Kea in the glacier car park[51] and in 2008, two Kea were shot in Arthur's Pass and stapled to a sign.[27]