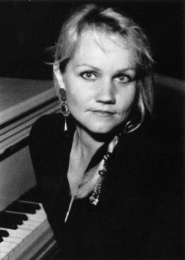 
Eva Marie Cassidy (February 2, 1963 – November 2, 1996) was an American known for her interpretations of , , folk, gospel, country and pop classics. She released her first album "The Other Side", a set of duets with musician in 1992 followed by a live solo album, "" in 1996. Cassidy was virtually unknown outside her native when she died of in 1996.

Four years later, Cassidy's music was brought to the attention of UK audiences when her versions of "" and "Fields of Gold" were played on . Following the overwhelming response, a camcorder recording of "Over the Rainbow" taken at the was shown on 's "". Shortly after, the compilation album "Songbird", climbed to the top of the s, almost three years after its initial release. The chart success in the United Kingdom led to increased recognition worldwide; as of 2008, her posthumously released recordings, including three UK #1s, have sold around eight million copies.

Born on February 2, 1963 at the , [Burley et al. p.13.] Eva Marie Cassidy was the third of four children born to Hugh and Barbara Cassidy. Her father, a retired teacher, sculptor, musician and former army medic, is of Scottish and Irish descent while her German-born mother was a horticulturist.

At age 11, Cassidy began her professional career, singing and playing guitar in a Washington area band called Easy Street. [Burley et al. p.54&ndash;56.] This band performed in a variety of styles, at weddings, corporate parties, and pubs. Due to her shyness, she struggled with performing in front of strangers. While a student at Bowie High School, she sang with a local band called Stonehenge. During the summer of 1983, Cassidy sang and played guitar six days a week at the theme park Wild World. Her younger brother Dan, a r was also a member of this working band. She enrolled in art classes at a community college but dropped out after finding them unhelpful.

Throughout the 1980s, Cassidy worked with several other bands, including the techno-pop band Characters Without Names. During this period, Cassidy also worked as a propagator at a plant nursery and as a furniture painter. In her free time, she explored other artistic expressions including painting, sculpting and jewelry design. Despite holding a belief in God, Cassidy was not part of any organised religion. [Burley et al. p.165.]

In 1986, Cassidy was asked by Stonehenge guitarist and high school friend David Lourim to lend her voice to his music project, . [Burley et al. p.64.] This brought her to Black Pond Studios, where she met bassist and recording engineer Chris Biondo. Biondo helped her find work as a session singer and later introduced her to Al Dale, who would become her manager. She sang back-ups for various acts from band to rapper .

In 1992, Biondo played a tape of Cassidy's voice for , the "Godfather of go-go". It resulted in the duet album "The Other Side" featuring performances of classic songs such as "Fever", "God Bless the Child" and what would later become Cassidy's signature tune "Over the Rainbow". The album was released and distributed in 1992 by Liaison Records, the label that also released Brown's Go-go albums. Brown originally intended to record a single duet with Cassidy for his next solo album, but this was postponed due to ongoing negotiations between Dale and other labels for a solo deal. [ [http://www.evacassidy.org/eva/citypaper.htm Side by Side] Alona Wartofsky, "Washington City Paper", November 20, 1992. Retrieved on March 6, 2008.] Cassidy's unwillingness to narrow her stylistic focus to one genre hindered her chances of securing a deal. [ [http://www.time.com/time/arts/article/0,8599,105719,00.html Over the Rainbow] Jeff Chu, "Time", April 9, 2001. Retrieved on March 6, 2008.] [ [http://www.crosstownarts.com/CrosstownArts/client_music/eva/gift.html Eva Cassidy's Gift] Joan Anderman, "Boston Globe", January 31, 1999. Retrieved on March 6, 2008.] After talks broke down, the two decided to record their own duet album. As a duo, they performed at Wolf Trap and the Columbia Arts Festival and opened for acts like and .

In 1993, Cassidy was honored by the with a Wammie award for the "Vocalist Jazz/Traditional" category.

After having a potential contract with collapse when the label went bankrupt, Biondo and Dale decided that she should release her own live album. In January 1996, the material for "" was recorded over a two-day period at , Washington, D.C. Due to a technical glitch on the first night of recording, [ [http://www.evacassidy.org/eva/gt.htm Eva Cassidy: "Oh, Had I a Golden Thread"] evacassidy.org. Retrieved on March 6, 2008.] only the second night recording was usable. Unhappy with the way she sounded due to a cold, she was reluctant to release the album. Only after some persuasion did she relent, on the condition that the studio track "Oh, I had a Golden Thread" would be included in the release and that she be allowed to start working on a follow-up studio album. Her apprehension appeared unfounded as local reviewers and the public responded positively. In one of the first published news articles on Eva Cassidy, "" commented that "she could sing anything&mdash;folk, blues, pop, jazz, R&B, gospel&mdash;and make it sound like it was the only music that mattered".

In 1993, Cassidy had a malignant mole removed from her back. Three years later, during a promotional event for the "Live at Blues Alley" album in July 1996, Cassidy noticed an ache in her hips, which she attributed to stiffness from painting s while perched atop a stepladder. The pain persisted and a few weeks later, s revealed that the had spread to her lungs and bones. The doctors gave her three to five months to live. Cassidy opted for aggressive treatment, but her health deteriorated rapidly. In her final public performance in September 1996, at , she closed the set with "" in front of an audience of friends, fans and family.

Cassidy died at her family home in Bowie, November 2, 1996, at the age of 33. She was posthumously inducted into the Hall of Fame of the Washington Area Music Association. [ [http://web.archive.org/web/19970109025159/www.crosstownarts.com/CrosstownArts/client_music/eva/evabio.html Eva Cassidy Biography] Washington Area Music Association. 1997. Retrieved on March 6, 2008.] According to her wishes, Cassidy’s body was cremated. Her ashes were scattered on the shores of St. Mary's River Watershed Park, a nature reserve near California, Maryland.

After Cassidy's death, local folk singer introduced the Blues Alley recording to Bill Straw from her label, Blix Street Records. Straw approached the Cassidy family to put together a new album. In 1998, a compilation of tracks from Cassidy's three released recordings was assembled into the CD "Songbird". This CD lingered in relative obscurity for two years until being given airplay by on his wide-reaching [ [http://news.bbc.co.uk/2/low/entertainment/4211631.stm Wogan show draws record numbers] BBC News, January 27, 2005. Retrieved on March 17, 2008.] BBC Radio 2 show "", following recommendation by his producer . The album sold more than 100,000 copies in the following months. "" spoke of her "silken soprano voice with a wide and seemingly effortless range, unerring pitch and a gift for phrasing that at times was heart-stoppingly eloquent".

Before Christmas of 2000, "Top Of The Pops 2" aired a video of Cassidy performing "", which resulted in "Songbird" climbing steadily up the UK charts over the next few weeks. Just as 's "" aired a feature on Cassidy, the album topped the chart. [Burley et al. p.155.] Shot at Blues Alley by a friend with a camcorder the same night the album was recorded, the black-and-white video became the most requested video ever shown on Top Of The Pops 2. [ [http://www.bbc.co.uk/southyorkshire/entertainment/music/interviews/2002/eva_cassidy.shtml Eva Cassidy's producer Chris Biondo talks to Toby Foster] "BBC Radio", July 2002. Retrieved on March 6, 2008.] "There's an undeniable emotional appeal in hearing an artist who you know died in obscurity singing a song about hope and a mystical world beyond everyday life", wrote "". [ [http://arts.guardian.co.uk/fridayreview/story/0,12102,823068,00.html Albums from the crypt] "The Guardian", November 1, 2002. Retrieved on March 6, 2008.]

"Songbird" has since achieved significant chart success throughout Europe and quadruple platinum status in the UK. Although still relatively unknown in the United States at that time, the album would eventually be certified gold over there. [ [http://www.riaa.com/newsitem.php?news_year_filter=&resultpage=76&id=182519BF-06DB-6DF5-F763-3555CDC1857A RIAA Gives Thanks For Strong Gold and Platinum Numbers In November] RIAA News Room. Retrieved on March 6, 2008.] Sherri Dalphonse of Washingtonian.com writes, "Some may wonder if Cassidy's death at the age of 33 accounts for some of the popularity. No doubt her life story is part of it. But articles about her haven't boosted sales as much as when her songs are played on the BBC or NPR. Hearing about Eva Cassidy isn't as powerful as hearing her."

In 2004, during the gala opening of the Bowie Center for the Performing Arts, the Bowie Regional Arts Vision Association, Inc. (BRAVA) dedicated the Star's Dressing Room to Eva. Following a moving tribute to Eva, Chuck Brown took to the stage and performed his duet "with" Eva as her photos and video appeared in the background.

A collection of previously unreleased studio recordings from 1987 to 1991, was released in 2000 as "No Boundaries". This release was not endorsed by the Cassidy family and was released under a different label. An review of the album stated that even "a gifted vocalist like Eva Cassidy can only do so much with bad material". [ [http://www.allmusic.com/cg/amg.dll?p=amg&sql=10:ysm1z87a2yvo~T1 Review of No Boundaries] William Cooper, "allmusic". Retrieved on March 6, 2008.] In 2002, the self titled 1988 album by the band , which Cassidy sang for, was re-released by the band's guitarist and producer David Lourim. Cassidy's name was featured prominently on the cover, which led to the Cassidy family and Blix Street Records filing a lawsuit against Lourim, [ [http://www.mdd.uscourts.gov/Opinions152/Opinions/Cassidy031904.pdf Hugh Cassidy, et al. v. David Lourim, et al.] (PDF) United States district court for the district of Maryland. Retrieved on March 6, 2008.] claiming that Cassidy's name was used in a misleading fashion. Eventually the cover was changed to look like the original . [ [http://www.evacassidy.org/eva/methodactor.htm Method Actor] evacassidy.org. Retrieved on March 6, 2008.]

In 2001, a book entitled "Songbird: Eva Cassidy: Her Story By Those Who Knew Her", on the life and work of Cassidy based on interviews with close family and associates was released in the UK. The hardcover edition has since sold in excess of 100,000 copies. A U.S. edition published by Gotham Books was released in late 2003 and includes two additional chapters on her influences and success in the US. Her life story has also been adapted into a musical [ [http://www.granthamjournal.co.uk/leisure/Musical-charts-life-of-songstress.3875566.jp Musical charts life of songstress Eva Cassidy] "Grantham Journal", March 13, 2008. Retrieved March 17, 2008] and also a Broadway piece for cancer benefit. [ [http://www.broadwayworld.com/viewcolumn.cfm?colid=2042 Eva Cassidy Remembered] "Broadwayworld.com", January 26, 2005. Retrieved March 17, 2008]

At the gala, and later on tour, figure skater brought Cassidy's music to a new audience when she skated to a recording of "Fields of Gold". Kwan's part in exposing the music of Cassidy to the international and American public led Cassidy's label to present her a gold record from the certification of "Songbird". [ [http://heatherw.com/mk/other/evapress.htm Blix Street Records Presents Kwan with Gold Record for Cassidy's 'Songbird' Album] Press release. Retrieved on March 6, 2008.] Subsequently, other figure skaters such as , and have used Cassidy's music in their routines.

Anglo-Georgian singer is a keen fan of Cassidy.

The first film to feature an Eva Cassidy's recording was "Flight of Fancy" starring " ". Since then her music has appeared in various film and tv series including the comedy "", "", "", "", "" and "Smallville". Cassidy's arrangement of "Over the Rainbow" is a popular cover choice by singing competition contestants, with "" season 5 runner-up and "The X Factor" season 3 winner among the numbers. Her interpretation of "" has been performed by "American Idol" season 7 runner-up .

In late 2007, AIR Productions acquired the rights to produce a film based on Cassidy's life.

*"Eva Cassidy Sings" (2004) – A single-camera video recorded at Blues Alley the same nights as the live album in January 1996.