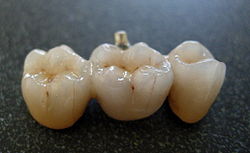 A three unit porcelain fused to metal bridge (PFM) made by a dental technician.

A semi-precision attachment between teeth #3 and #4, with the female on #4. Note the lingual buttons extending, in the photo, upward on #2 (on the left) and downward on #4. These are used to grasp the crowns with a hemostat and make them easier to handle. They can also be used to aid in removal of the crown in case there is an excessive amount of retention during the try-in. They are cut off prior to final cementation.

The proximal surfaces of the pre-solder index abutment and pontic, showing lab-processed grooves for added retention of the GC pattern resin.

The abument and pontic joined with GC pattern resin in a solder index and reinforced with an old bur (lying horizontally across the occlusal surface of the copings).

A bridge, also known as a fixed partial denture, is a dental restoration used to replace a missing tooth by joining permanently to adjacent teeth or dental implants.

Types of bridges may vary, depending upon how they are fabricated and the way they anchor to the adjacent teeth. Conventionally, bridges are made using the indirect method of restoration. However, bridges can be fabricated directly in the mouth using such materials as composite resin.

A bridge is fabricated by reducing the teeth on either side of the missing tooth or teeth by a preparation pattern determined by the location of the teeth and by the material from which the bridge is fabricated. In other words, the abutment teeth are reduced in size to accommodate the material to be used to restore the size and shape of the original teeth in a correct alignment and contact with the opposing teeth. The dimensions of the bridge are defined by Ante's Law: "The root surface area of the abutment teeth has to equal or surpass that of the teeth being replaced with pontics".[1]

The materials used for the bridges include gold, porcelain fused to metal, or in the correct situation porcelain alone. The amount and type of reduction done to the abutment teeth varies slightly with the different materials used. The recipient of such a bridge must be careful to clean well under this prosthesis.

When restoring an edentulous space with a fixed partial denture that will crown the teeth adjacent to the space and bridge the gap with a pontic, or "dummy tooth", the restoration is referred to as a bridge. Besides all of the preceding information that concerns single-unit crowns, bridges possess a few additional considerations when it comes to case selection and treatment planning, tooth preparation and restoration fabrication.

When a single tooth requires a crown, the prosthetic crown will in most instances rest upon whatever tooth structure was originally supporting the crown of the natural tooth. However, when restoring an edentulous area with a bridge, the bridge is almost always restoring more teeth than there are root structures to support. For instance, in the photo at right, the 5-unit bridge will only be supported on three abutment teeth. To determine whether or not the abutment teeth can support a bridge without failure from lack of support from remaining root structures, the dentist employs Ante's rule—which states that the roots of abutment teeth must have a combined surface area in three dimensions that is more than that of the missing root structures of the teeth replaced with a bridge. When the situation yields a poor prognosis for proper support, double abutments may be required to properly conform to Ante's rule.

When a posterior tooth intended for an abutment tooth already possesses an intracoronal restoration, it might be better to make that bridge abutment into an inlay or an onlay, instead of a crown. However, this may concentrate the torque of the masticatory forces onto a less enveloping restoration, thus making the bridge more prone to failure.

In some situations, a cantilever bridge may be constructed to restore an edentulous area that only has adequate teeth for abutments either mesially or distally. This must also conform to Ante's rule but, because there are only abutments on one side, a modification to the rule must be applied, and these bridges possess double abutments in the majority of cases, and the occlusal surface area of the pontic is generally decreased by making the pontic smaller than the original tooth.

As with preparations for single-unit crowns, the preparations for multiple-unit bridges must also possess proper taper to facilitate the insertion of the prosthesis onto the teeth. However, there is an added dimension when it comes to bridges, because the bridge must be able to fit onto the abutment teeth simultaneously. Thus, the taper of the abutment teeth must match, to properly seat the bridge. This is known as requiring parallelism among the abutments.

When this is not possible, due to severe tipping of one of more of the abutments, for example, an attachment may be useful, as in the photo at right, so that one of the abutments may be cemented first, and the other abutment, attached to the pontic, can then be inserted, with an arm on the pontic slipping into a groove on the cemented crown to achieve a span across the edentulous area. 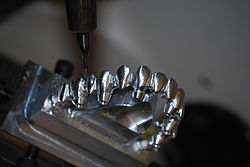 As with single-unit crowns, bridges may be fabricated using the lost-wax technique if the restoration is to be either a multiple-unit FGC or PFM. Another fabrication technique is to use CAD/CAM software to machine the bridge.[2] As mentioned above, there are special considerations when preparing for a multiple-unit restoration in that the relationship between the two or more abutments must be maintained in the restoration. That is, there must be proper parallelism for the bridge to seat properly on the margins. Sometimes, the bridge does not seat, but the dentist is unsure whether or not it is only because the spatial relationship of the two or more abutments is incorrect, or whether the abutments do not actually fit the preparations. The only way to determine this is to section the bridge and try in each abutment by itself. If they all fit individually, it must have simply been that the spatial relationship was incorrect, and the abutment that was sectioned from the pontic must now be reattached to the pontic according to the newly confirmed spatial relationship. This is accomplished with a solder index.

The proximal surfaces of the sectioned units (that is, the adjacent surfaces of the metal at the cut) are roughened and the relationship is preserved with a material that will hold on to both sides, such as GC pattern resin. With the two bridge abutments individually seated on their prepared abutment teeth, the resin is applied to the location of the sectioning to reestablish a proper spatial relationship between the two pieces. This can then be sent to the lab where the two pieces will be soldered and returned for another try-in or final cementation.